Cleaning services are being promoted to potential clients in north Tel Aviv with a flyer that prices its cleaners according to their ethnic origin. The advert also refers to its employees in the feminine only. 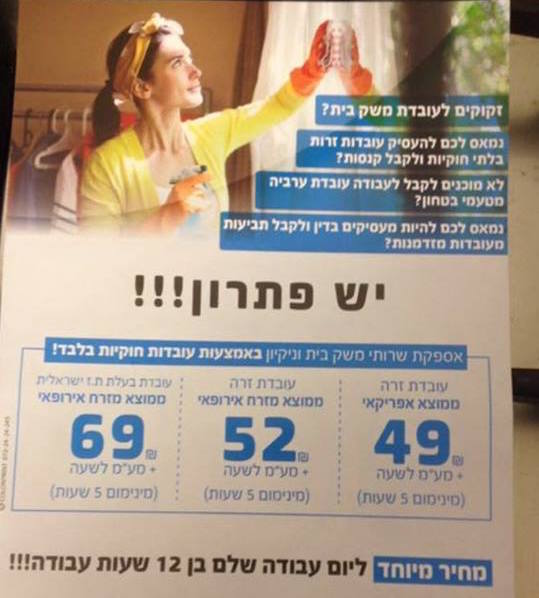 A flyer distributed in north Tel Aviv that offers cleaning services according to the ethnic origin of the (female only) cleaner.

A service provider offering cleaning and housekeeping in north Tel Aviv has taken the term “human resources” to a whole new level, distributing a flyer that prices its cleaners according to their ethnic origin.

The advert, which was distributed in one of Tel Aviv’s most affluent areas, was first posted on Facebook by political blogger Tal Schneider, who was given the flyer by an acquaintance.

Starting out with a corny infomercial-style list of questions, the ad asks: Do you need a housekeeper? Are you tired of hiring illegal foreign workers and getting fined? Not prepared to have an Arab cleaner for security reasons? Are you tired of employing according to the law and being sued by temporary workers?

The flyer then presents the “solution” to all these unpleasant and onerous problems, by offering “legal only” housekeepers and cleaners, with hourly rates scaled according to the cleaner’s ethnicity.

The flyer also refers to the cleaners in question exclusively in the feminine (Hebrew is a gendered language), which in conjunction with the illustrative photo of a serene (and white) woman cleaning a window, adds a healthy wallop of sexism into the mix.

The immediate assumption of many that this is satire designed to highlight the very open and profound racism that runs through Israeli society was unfortunately dispelled, according to national news outlet Mako [Heb], which said it managed to contact an employee of the company to confirm that the ad was indeed real. The employee also reportedly claimed that paying employees different salaries according to their ethnicity is not illegal.

Each time such a brazen and shameful display of casual racism pops up in this country, the immediate response is to compare it to how it would look if another country did the same thing: to imagine, for example, the uproar that would be caused if an American company priced its (female-only) cleaning services according to whether the cleaners were from southeast Asia, say, or African-American.

It’s a valid and tempting comparison to make. But it’s also sad, because it demonstrates just how deep-seated the prejudice is in Israel: people have to be shown other examples of horrendous discrimination in order to understand just how unnatural this state of affairs is. And anyone who may want to console themselves with the idea that this kind of precision racism is not a perfectly normal part of the discourse here need only look back to another mini-incident from a few months back.

Last October, in response to a wave of stabbing and other terror attacks, the council of Tel Aviv suburb Givatayim started looking into the possibility of replacing all their schools’ Palestinian janitorial staff with Eritreans [Heb]. What stood in their way? A previous law passed by the Israeli government that barred the employment of African asylum seekers in the central Israel region.

Underneath all of this, of course, is the unspoken understanding that this kind of manual work is only to be assigned to non-Jews (thus, for example, a fairly prominent lawyer once blithely remarked to me that “Jews are too smart” for this kind of labor).

One more thing: the last carrot the flyer dangles in front of its prospective clients is a special price for a “full day” of 12 hours of work. Human resources, indeed.