The practice run, ahead of what some groups believe will be the construction of a Third Temple, was co-ordinated by dozens of groups from the Temple Mount Movement — including those who call for the destruction of Muslim holy sites.

Warning: This article contains a graphic image of animal slaughter. 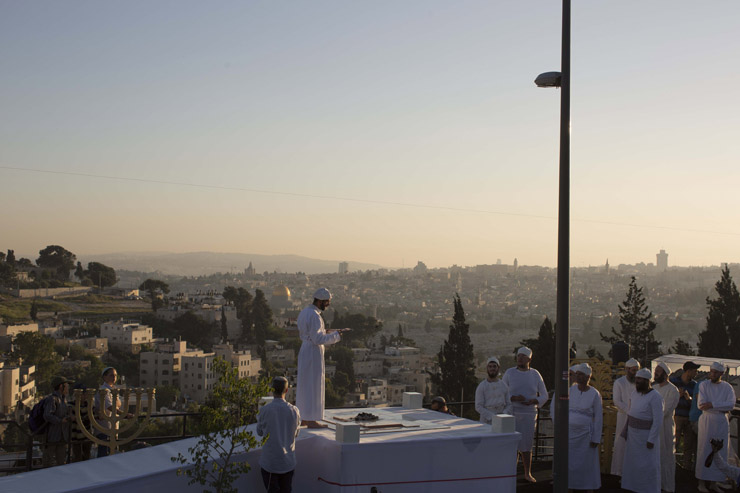 ‘Cohenim’ stand on a stage performing a ‘practice run’ of a sacrifice ritual in the East Jerusalem neighborhood of at-Tur, with the Haram al-Sharif/Temple Mount visible in the background, April 18, 2016. (Tali MayerActivestills.org)

A crowd of hundreds came to watch the fifth and largest tirgul korban pesach – an annual re-enactment, or “practice run” of the paschal lamb sacrifice that was the central ritual of the harvest festival of Passover during ancient times. The ceremony took place on Mt Scopus overlooking the Old City, in a Dati Leumi (religious Zionist) Yeshiva in Beit Orot, which is a Jewish settlement in the Palestinian neighborhood of at-Tur.

In the afternoon there was a panel discussion with several high-profile rabbis, as well as lectures covering in detail the practical aspects of recreating the ritual life of the Temple – for example, the challenge of sourcing the correct dyes for priestly robes. Outside children stroked the sheep and goats and teenage boys built an oven by the stage. A young man played the harp opposite a stand selling popcorn, hotdogs and candy-floss and some children ran around with a Lehava stickers on their clothing. 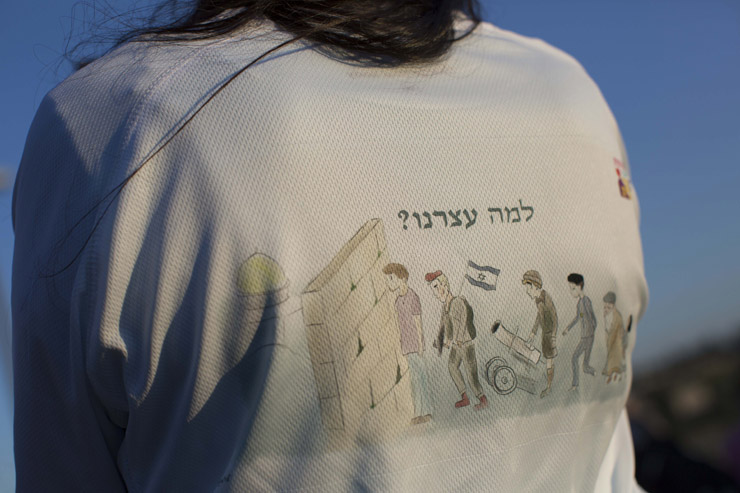 An attendee at the sacrifice ceremony wears a T-shirt that reads, ‘Why did we stop?’, suggesting that Israeli forces should have demolished Al-Aqsa Mosque when they conquered the Old City of Jerusalem and the Western Wall in 1967, at-Tur, East Jerusalem, April 18, 2016. (Tali Mayer/Activestills.org)

The ceremony was preceded by dramatic speeches and festive musical performances. Biblical passages describing each stage were read out as the Cohanim – men said to be descended from the priestly tribe – washed their feet and hands before pouring the blood of the animal onto the makeshift altar, accompanied by blasts of silver trumpets. Afterwards, the cooked meat was shared out among the attendees; the Passover offering of ancient times was unusual in being consumed by all of the people, not only by the priestly caste.

Read also: The fraud that is the Temple Mount movement

The practice run was co-ordinated by dozens of groups from the Temple Mount Movement, with a broad range of religious backgrounds and political strategies represented. There are those that call for the violent destruction of Muslim sites of worship; others work within the remit of Israeli law and deploy a civil and religious rights rhetoric to expand Jewish prayer access to the the Temple Mount (Haram al-Sharif). However the distinctions between these camps are not always clear cut. 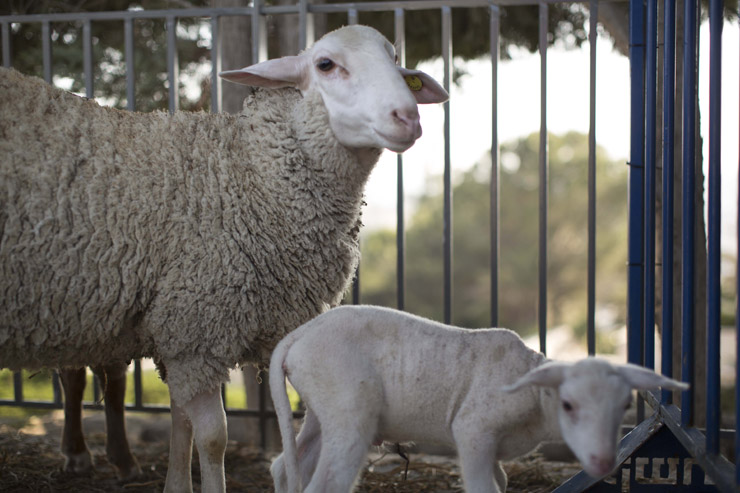 The lambs that will be soon slaughtered in a ’practice run’ of pre-Passover sacrifice, at-Tur, East Jerusalem, April 18, 2016. (Tali Mayer/Activestills.org)

Alongside Religious Zionists there were many Haredim or Hardalim (Haredi Dati Leumi) as well as less stringent masorti, ‘traditional’ Jews. Youth movements and student organizations were present, such as Students for Har Habayit; these play a significant role in spreading the culture of the Temple movement throughout the year. There were also many individuals and families who are not activists but curious supporters looking for an interactive and educational day out with their children.

This reflects the growth and broadened appeal of the Temple movement in recent years. What had been a fringe and mostly settler movement now attracts a younger generation, as well as Rabbis and politicians from the Israeli mainstream-right including Mickey Zohar of Likud. The movement is growing despite longstanding Rabbinic rulings prohibiting Jews to enter the Temple Mount or to attempt to bring about the building of a third Temple by secular means. Temple activists are defiant in the face of political opposition to increasing the conflict around the Haram al-Sharif/ Temple Mount; like Evangelical Christian Zionists, they see war as a necessary or even welcome precursor to the coming of the Messiah. 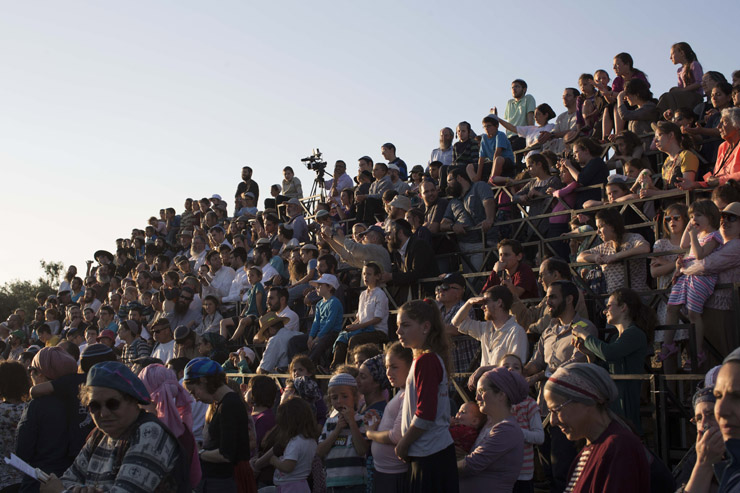 This vision understandably leaves many Jews cold, and for pragmatic and historical reasons as well. Judaism has for two thousand years been decentralized and focused on the study of texts; many feel that Jewish practice has come a long way since the Jerusalem Temple cult centered on animal sacrifices practiced by a hereditary caste of priests. However, for devotees of the movement, the symbols which recall the sacrifice – the shank bone on the seder plate and the eating of the afikoman, broken matzah, after the Passover meal – are insufficient replacements for the real thing.

Read also: The incitement Netanyahu doesn’t want to talk about

The more casual attendees could relate to both perspectives. Many who came with families or from mainstream yeshivot were equivocal, motivated by curiosity and a desire to reinvigorate Jewish life and educate their children about historical practices. Alongside the excitement and hype was a sense that many present did not know quite what to think of the spectacle taking place, let alone about how a Third Temple would be built or how to relate to the more violent parts of the movement. However, even if many of those attending the ceremony didn’t see it as such, this was as much a political demonstration for the Jewish-supremacist right wing as was the protest in Tel Aviv supporting the army’s murder of Palestinians in Hebron. 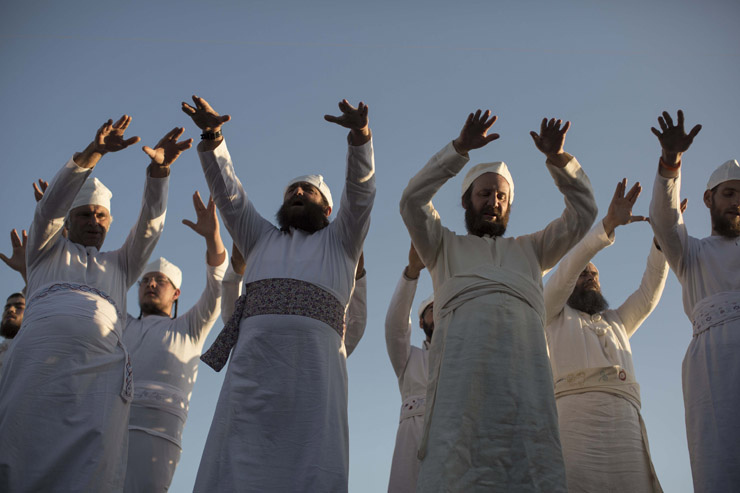 Cohanim, men said to be descended from the priestly tribe, perform the ‘priestly blessing’ during a ‘practice run’ of a pre-Passover Temple sacrifice, at-Tur, East Jerusalem, April 18, 2016. (Tali Mayer/Activestills.org)

This tension between the sacred and the mundane was present amongst the organizers too. On the one hand, ecstatic speakers cried out that although this was just a practice, we could look forward to the real thing on the Temple Mount, “not next year, but next week,” and denounced the Israeli government as just the latest in the long list of the oppressors of the Jewish people who have prevented the actualization of the Temple.

On the other hand, another speaker, Arieh King, welcomed the financial support the event received from the Jerusalem municipality and hoped that next year the event could take place with a municipality logo on its publicity. Attendees were also reassured that the event was taking place according to strict health and safety regulations and with the supervision of relevant veterinary authorities. A mixed approach to the geulah (liberation), to say the least.

Perhaps what united all attendees was a longing for the imagined glory of Biblical past or Messianic future to relieve them from the weight of the present – of which news of the bus explosion, coming just after the throat of the sheep was cut, was a grim reminder. 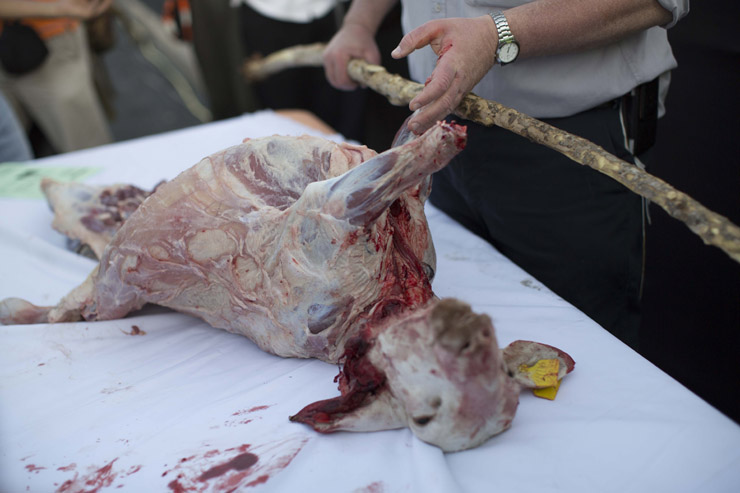 The lamb that was slaughtered as part of a ‘practice run’ of a pre-Passover Temple sacrifice, at-Tur, East Jerusalem, April 18, 2016. (Tali Mayer/Activestills.org)