Tonight, tens of thousands of people will march from the tent camp in Tel Aviv to protest not only the housing prices but the overall discontent and frustration with Israel’s political system. Writer Roni Gelbfish shares six notes on how she found she doesn’t need to be cynical to survive in Israel anymore. 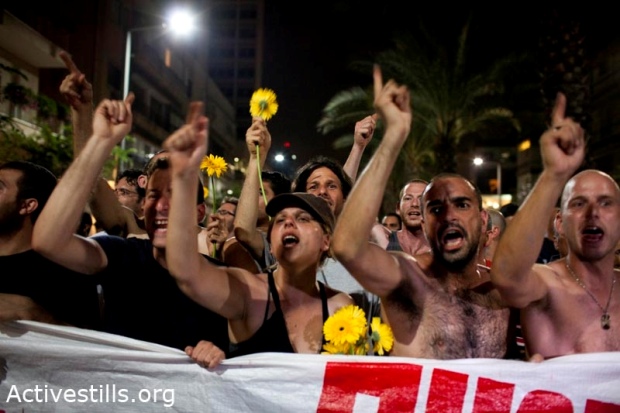 It’s hard to write clearly and concisely about the struggle waged in Israel’s streets and squares for the past few days. It’s hard to write about it reservedly, and maybe it’s for the best. So many years have past since we dared to hope for something better. A decade and a half of weary shrugs, of “that’s the way it is,” of a trance-like state covering up over hopelessness. Because that’s the way it is.

And suddenly everything is aflame. People are sleeping in boulevards, on the squares, on the lawns. Processions go marching through the city, and people are shouting with hoarse throats – give us back our dignity. Did we ever have dignity? I can’t remember.

1. At the entrance to the tent-packed boulevard I opened up my purse, folded up the cynicism I carry around for survival purposes, and shoved it deep inside. Today, I told myself, I’ll only watch and look. With an open heart.

2. For two years now, Prime Minister Benjamin Netanyahu has been telling us about Israel’s blooming economy. Quietly, to myself, I was thinking that it does seem like everything is flourishing. It’s only me that manages to buy less and less, and I probably didn’t work enough this month. Freelancers are quickly punished for their sins, and it may even be right, from time. But then came the cottage cheese protest – which succeeded, and then failed; and then the tents, and on Thursday the harsh, marvelous news of the brave medical residents, who are loathe to violate either the law of the Hippocratic Oath, but they can’t go on anymore. They hospitalize themselves in their own hospitals, to pressure the system without violating the court orders not to leave work. They go on hunger strikes. They are escalating the struggle. The lie has survived for two years, but no longer.

3. I went to the boulevard just to have a look. It seemed to me a little like a festival. Strange. I walked, I looked, I listened. I heard friends of mine speak at the tent and I was filled with pride – did I know I had such impressive friends? I did not. I’m sure some of them didn’t know they were like that, either. Eventually I also spoke there, and I will speak again. I sat down for long conversations with the veterans of the Bread Square protest, and with a social worker who came to express solidarity and sleep at the tent camp, and meanwhile found herself helping four homeless people who also found their way here. We were sitting on a couch near the main tent at 11pm. A man walked up to us, a reasonably nice man, with a light French accent. What’s going on here, he asked. We looked at him as if he fell from the moon. I hesitated as I replied – maybe he’s mocking me, maybe he’s just a tourist. “I’ve been living rough on the street for four months now,” he said. “I didn’t know it was happening here, all this mess. A friend came by here and he told me something was on.” So we told him what was on, told him this place, here, was for him, and sent him to eat something at the communal kitchen. The stunned look on his face reminded me I couldn’t believe it a week ago either. I still can’t, from time to time. Did we really take to the streets? Really?

4. There’s no place I’d rather be now. There, in the squares, small flowerbeds are springing – of hopes, of shy, confused smiles. And I hear the words repeat themselves:

I can’t believe it.

How did this happen?

Tell me it won’t go away.

I know that last bit. The fear. Tell me it won’t go away, tell me it will go on, tell me that this is really going to happen. That the night on which I marched with a burning torch from Marmorek Street to Ibn Gvirol – and if there wasn’t a picture to prove it, I wouldn’t believe it myself – is the beginning of a change.

And I think I saw a sliver of it tonight, something so rare that it overwhelmed us. Tzlil saw it first: The protest leaders, with the bullhorns, reminding us that the policemen are our brothers, not the enemy. That we should do things together. And earnest policemen surround us from all sides, but there’s no confrontation. Not even tension. They converse with the organizers, they tell them that the torches are dangerous. We put the torches out and young people go through the ranks of the protesters and give out flowers, which are immediately handed over to the cops. I’ve never seen this in any protest that I have been to. Never.

And I look at them and I think they’re making five thousand shekels a month, and that they’re legally banned from unionizing and going on strike. And I feel they are marching with us, by our side. And I wonder if the obtuse, the cold-shouldering, silent government thinks these policemen will push us off the streets when the order comes.

5. This protest has a language. The most common word, spreading from day to day, is “revolution.” And instead of applauding, people wave their hands, and when they disagree, they cross their arms. Everyone is invited in, with no exception. Come. Talk. This revolution is innocent, but before it sobers up, I hope it will be able to achieve something. At least a hope for a better future.

But for this, we all have to do our part. Tonight at 9pm this tremendous crowd will set out from the National Theatre Square to the Tel Aviv Museum. These are marvelous days of hope and fear, and I pray to see there hundreds of thousands. Nothing less. Because somewhere, out there, in Jerusalem, they see us and they hear us and yet they are not doing anything.

6. When I left the boulevard I remembered the cynicism I shoved into my purse earlier that evening. There was nobody else there who brought their cynicism along. Mine would have nobody to play with. So I decided to leave my impractical, useless, miserable cynicism folded up deep inside my purse. I said goodbye to it. I don’t need it anymore.

More about the tent protest:

Everything in this land is about real estate: Understanding the tent protests / Noam Sheizaf