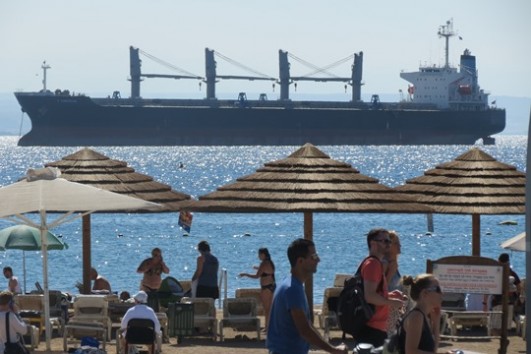 Off the Sinai smuggling routes, there’s a place called Coral Beach – that’s where you wanna go, to get away from it all. It is only a short bus ride from central Eilat, so you can get there fast and take it slow. Just don’t go wandering the hills on your own, since you may accidentally cross the Egyptian border and get shot.

But why resort to a Beach Boys paraphrase? Eilat is amply sung about in Hebrew. In the words of local songster Yaron London: “Come, let us escape from the asphalt/And from the crumpled cities/Come, let us escape to the quiet lagoons/Come on to Eilat, to Eilat.”

We have come quite far on this series so far, and some degree of originality is called for. We deconstructed Nazareth aesthetically, Bethlehem historically, Safed mystically and Yad Vashem according to literary standards. I have five hours on the bus to choose an angle for tackling Eilat before arriving; I think I will try and analyze it psychologically. It is, after all, a state of mind.

Eilat, the only remote city in a country hardly large enough to be called a country, is seen by Israelis as partially ex-territorial. And in a sense it is. At the end of a delightfully scenic desert drive, my bus must stop at a checkpoint and be inspected by members of the Border Police. What border are we crossing? No border, of course. We are entering Eilat’ free trade zone, where VAT is not charged and instead prices are hiked independently to cover the difference.

Eilat is not sacred, it is not under occupation. It is not even, in pure Jewish religious terms, located within the “Land of Israel.” It therefore qualifies it as a fine haven for an anxious nation. Of course, Israelis aren’t the only ones who visit Eilat. It is a favorite among Scandinavians and other northern Europeans, who can trust the sun to shine here year round. We come here despite the weather: the climate in the rest of Israel is quite a bit more moderate, the beaches are better and the food finer. We come here because it’s calm.

Read: Framing the story of Holocaust at Yad Vashem

As a city of refuge, Eilat is a bit strange. It is situated at the virtual meeting point of four Middle Eastern countries, one of which has seen two revolutions in the past five years, another is run by fundamentalists who chop off heads with an ISIS-like zeal, a third is actually threatened by ISIS and the fourth is, well, Israel. Eilat is hit by the occasional rocket launched from the Sinai, and is the one spot in the country most prone to serious earthquakes. Summer days here are hellish, with temperatures occasionally exceeding 45 degrees Celsius (113 in Fahrenheit), But still, it works.

Where broadway is a runway

As the bus pulls up to city’s central station, we pass by a hotel named “Siesta.” My hypothesis encapsulated a single word. I disembark, walk one block down the hill to Siesta, where I am able to read the full name of the hotel. It incorporates the name of the chain, and is actually called “Holitel Siesta.” Holi – as in holy? So things still are holy here? There isn’t really any escape, is there?

It is in speaking to the reception clerk, Didi, that I first notice something different. Any interaction between two Israelis who come from different social and ethnic backgrounds carries its own baggage, and this should be no exception. Didi appears to be a Mizrahi Jew, and her home town is Ashkelon, a disenfranchised periphery town. I am a Tel Avivian Ashkenazi, here on a “journalistic assignment.” Our conduct is supposed to be contrived at best, awkward at worst.

It isn’t. It’s actually genuinely warm. We go on chatting long after I am checked in and holding my key card. I sense the same warmth with the bell boy at the elevator, who is a Galilean Palestinian.

The hotel is a microcosm of Israel’s demographics, albeit with a slight bias against my own, privileged group (it is, after all, a cheaper hotel, set away from the beaches). There are Russian Jews here as well as Mizrahi Jews, Druze women in white scarves, and Muslims in hijab, all of whom share the dining room with Hassidic families. It’s not perfect idyll, of course. No West Bank Palestinians are allowed into Eilat at all (Hebrew), including those who are given the most far-reaching entry permits to travel inside Israel. The poorest sectors in Israeli society cannot afford even a simple Eilat vacation, so the Ethiopian community, for one, is absent. Meanwhile, Eilat’s hospitality industry employs many of the city’s East African asylum seekers. This creates an unsettling “Sun City” reality in which white vacationers are tended to nearly exclusively by black laborers.

Other than that, I’m having a great time here. The Siesta dinner features stuffed artichokes (my favorite), my room has a cute little balcony, and the desert breeze is fine tonight. Impossibly, and despite my snobbish tendency to dismiss Eilat as a soulless tourist trap, I seem to have found refuge.

Hold on. Wasn’t all of Israel meant to be a “refuge?” This was supposed to be our haven from anti-Semitism and violence – a place to rest following millennia of vulnerability and sufferings? Now so many of us seek refuge anywhere but Israel. Just listen to the way Israelis pronounces the word khool (“abroad”) and you’ll get the gist.

Back in 2010 Ben Gurion airport yielded to complaints by Zionist activists, and removed an advertising sign promoting its duty free stores. The sign, which hung directly beyond passport control for departing passengers, read: “From this point on, we begin to have fun.” The activists claimed that fun can be had in Israel too, and that the ad is anti-patriotic. Personally I think most Israelis would sooner identify with the slogan than with the criticism against it.

Flying away has become our national pastime. We see little sense in saving up for buying a house in a real estate bubble that saw home prices double over the past seven years. We see little sense in trying to find peace of mind in an ever-burning land. We thus invest our precious pennies in weekend getaways, backpacking vacations or anything that will help us forget our impossible home.

For Israelis the airport has become an ultimate emblem of fond promise; in Eilat, the airport is the town’s centerpiece. A landing strip takes the place usually reserved for a main street, separating the hotel area (known locally as “tourism”) from the living city. Eilat is “khool away from khool” for those who cannot afford Paris. It does not, of course, resemble Paris. Instead it is a tiny Israel: a dense, seaside urban community, sandwiched between borders with the desert at its back. It is, however, made up mainly of an airport, and that’s what counts.

Eilat’s seafront promenade stretches less than a mile from the airport terminal to the Jordanian border. The hotels lining it grow posher as one heads east, culminating with the Royal Beach, the Eilat Dan Hotel and Herod’s — a fancy, orientalist three-part complex.

The rejection of the Middle East remains constant throughout the promenade. The Arabic language is absent (Hebrew, too, is replaced by an abundance of English), the architecture is strictly Western, providing the city with the skyline of a conservative Las Vegas. Only Herod’s complex corresponds with city’s location at the gates of Arabia, while trying to do so without being “Arab” per se. The spires that top the buildings vaguely recall minarets, although the arches are Romanesque and the theme is “ancient Edomite.” It is likely that the developers, uneducated as most Israelis are on the New Testament, do not know that they named their hotel after a famous baby-killer.

East of Herod’s is an empty gravel lot preceding the fenced border. Here, the city of Aqaba, large and dense, rich in concrete and spiked by many a real minaret, climbs up the slopes overlooking its eponymous gulf (known in Hebrew as “the Gulf of Eilat”). Halfway down its coastline towers the world’s fifth tallest flagpole, and harnessed to it is the world’s second largest flag. It is not the flag of Jordan, but the flag of the Arab Revolt, used by Arab nationalists during the revolt against the Ottoman Empire. The flag that is identical to the Palestinian flag in all but the order of its colored stripes, and is generally accepted as an alternative flag of Palestine (flag of the All-Palestine government).

This flag can be seen from everywhere on the promenade and through most windows in Eilat. It provides an omnipresent reminder that Eilat is a border town; that it borders the complex the Middle East, and that it belongs to the complex Middle East. But it also belongs to Israel, despite all evidence to the contrary. I turn around, ready to head back downtown, and find that one of its port hangers now presents an enormous mural: an Israeli flag responding in blue and white to the red, white, green and black. A rare instance of communication.