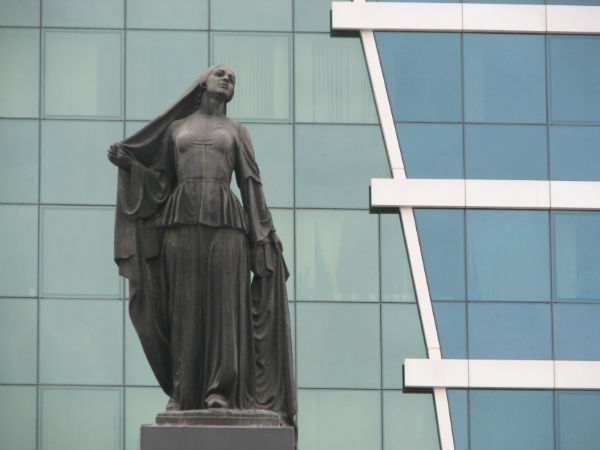 The monument to women's liberation in central Baku displays a woman removing her headscarf. Is she still Muslim? In the Azeri sense, she is.

“I’m not a feminist” says Elmira, and takes a sip from her pint of Turkish beer. “I mean, I do believe that women should have all the rights, but not that men should be weakened.”

We’re at the Otto, a bar in downtown Baku that caters mostly to foreigners. Elmira, though an alumnus of the city’s Russian school, a poet in the English language and an altogether cosmopolitan sort, is not a foreigner. Feminist or not, she’s an Azeri involved in women’s organizations.

The Otto is located a mere 300 miles from Iran, and a similar distance from Chechnya, which has become religiously polarized in recent decades due to the war. Azerbaijan itself has for years been engaged in a bitter war with its Christian neighbor to the west, Armenia. One would have expected such polarization to take place here.

This does not seem to be the case. Elmira’s friend Jamila joins the feminist jab and recommends that I go and visit the monument to the liberated woman, which stands outside Nizami metro station at the heart of the city.

I go there the following day and find myself astonished. In the midst of a Muslim city, atop a tall pedestal, is the likeness of a woman pulling off her headcover and exposing a braid. She does no do so angrily, but confidently.

Here is art faithfully imitating life. Ninety-nine percent of Azeris are Muslim. Eighty-five percent of them are Shiite, yet hijabs are extremely uncommon on Azeri streets, and not only in the capital. In four other towns I visited: Ganja, Qazah, Shemkir, and Surakhani (which inspired its own, less euphoric post)  I only saw them worn by members of the older generation, and that, more often than not, in a loose manner, more as a statement of identity than a strict practice.

We grow up with such fixed concepts of Muslim societies, that shaking them off is akin to pulling off a scarf from our own heads. When traveling into Azerbaijan, I passed an Ottoman-styled mosque on the Georgian side of the border and immediately felt adrenaline pour into my veins. We were approaching a Muslim land, “hostile territory” without doubt.

The first hint that a change of paradigm may be in order came with the first mosque on across the border. It looked nothing like the Georgian one. Mosques in rural Azerbaijan have no minarets. They are large country houses with delightful ornate facades, and somehow reminded me of village Buddhist temples in parts of east Asia.

This is west Asia, where Islam has a tradition of tolerance. Jews and Muslims lived for ages in true harmony in the various “stans,” a harmony that ended simply because most Jews immigrated elsewhere. Wherever I presented myself as an Israeli (and I always did) sincere warmth ensued, combined with plenty of curiosity. These people assumed nothing about me, and within a few days I learned to assume nothing about them.

Only a piece of cloth

I refuse to think of Azeris as inauthentically Muslims or semi-Muslims. Even following 73 years of secular Soviet rule They are Muslim and proud. Rashad, a young photojournalist I met, drinks no alcohol despite being perfectly modern and urban. In his family’s house a tapestry of Mecca adores the living room. It’s simply that the idea of Islam is healthy and relaxed.

Elmira is Muslim in the same way that I am Jewish. “Religion is more like tradition in this country,” she explained to me, and pointed out that it goes along with other traditions, such as the Zaraostrian holiday of Novruz. “There is an unspoken respect for people who make namaz or went to Mecca. Muslim tradition is very important here, but nobody takes you to mosques forcibly,”

In a land such as this, we can redefine our understanding of this religion and see it in a different light. I’m not terribly fond of organized religion in general, so even this different light doesn’t make me a greater lover of Islam than I am of other faiths, but seeing that it can be compatible with progress and does not necessarily advocate isolationism is encouraging and heart-warming.

The bronze lady at Nizami station is freeing herself of Islamist oppression, not of Islam itself. The truly spiritual know that Allah is not to be found in a piece of cloth. Symbols such as the headscarf only count for so much and can also be misleading. On one Azeri train an old lady demanded to know why I wear a full beard, an uncommon sight in this country. I asked an English speaking passenger in our compartment why she seems so bothered by it.

“She’s worried that you are an Al Qaeda terrorist,” he replied.