As a rule, Palestinians working for Israelis in the West Bank hate the settlements and the occupation. But they have to feed their families, so they swallow their pride. 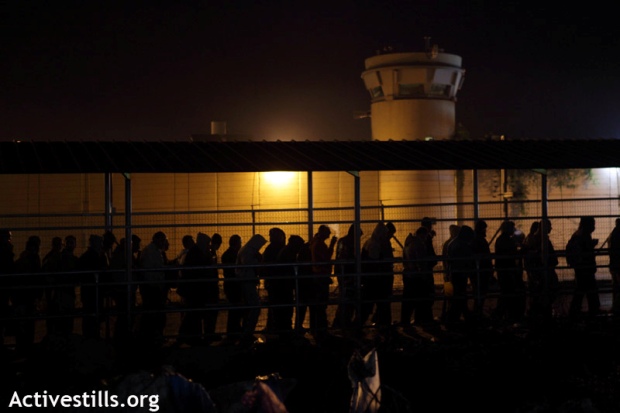 Supporters of the occupation have found a new set of spokesmen: the Palestinian workers at the West Bank factory owned by the Israeli company SodaStream, of BDS and Scarlett Johansson fame. Reporters from The Christian Science Monitor, The Telegraph and other media outlets talked to some of the 500 Palestinians employed at the Mishor Adumim plant, and quoted them saying they were against the boycott. It was threatening their livelihood. They would have a hard time finding a job at a Palestinian-owned company and no chance at all of finding one that paid as well as SodaStream, which, they said, treated them fairly.

“Palestinian workers back Scarlett Johansson’s opposition to SodaStream boycott,” read The Monitor’s headline. “’We need 1,000 SodaStreams around here,’” read The Telegraph’s, taken from a quote by a Palestinian contractor at the plant.

These were news stories in highly reputable media, their treatment of the issue was balanced, the quotes from the Palestinians – many taken while they were outside the plant – seemed credible. To people who don’t understand the occupation (and they include even intelligent, informed, liberal-minded folks like Johansson), this is very persuasive testimony. And so the hasbaratists have jumped on it. Honest Reporting, one of the most successful of the many pro-Israel, anti-Arab “media watchdogs,” stamped the Palestinians’ accounts all over its website in posts such as “Fighting BDS – SodaStream Workers Speak Out” and “SodaStream shows that BDS is the real obstacle to peace,”

Butter wouldn’t melt in these propagandists’ mouths. To understate things, it is rather cynical using those Palestinian workers as a weapon against the boycott and, by extension, on behalf of the settlements and occupation. Cynical because those Palestinians don’t support the settlements or occupation in the slightest. Some put the issue out of their minds, some are reluctant to talk about it out loud, but most of them, if the boss isn’t looking, will tell you that of course they’re against the settlements and Israeli rule, but they have to feed their families.

The Christian Science Monitor found one Palestinian worker at SodaStream who said as much.

I’m ashamed I’m working there,” he says. “I feel this is our land, there should be no [Israeli] factory on this land.”

I heard similar things myself in January 2010, during the so-called settlement freeze, from several Palestinian workers building new housing in Modi’in Illit and Givat Ze’ev. From my story in The Jerusalem Post  (the Palestinians all go under pseudonyms):

If I could work in Ramallah for half the money, I’d do it, but there’s no work,” says Taher.

“It hurts me that they’re building the settlements, but I have 10 children to feed,” says Ibrahim. “Forget it, there’s no freeze. The settlements are like cancer – they’ve spread too far to be stopped.”

“Of course I’m against the settlements, but I have no choice; I have to feed my family,” says Ghassan.

And however fair SodaStream may be to its Palestinian workers, fairness is anything but the rule among Israeli employers in the West Bank, especially building contractors, according to what I heard from Salwa Alenat, head of the Palestinian desk at the Israeli NGO Kav LaOved (Workers’ Hot Line):

They have the same legal rights as Israeli workers, but most of them get cheated one way or another. Some get paid half the minimum wage, some get a third. There’s a widespread practice of not paying overtime, not giving sick leave or vacation leave or severance pay. Palestinians have very little redress, so a lot of these employers think they can get away with anything. They make workers do all sorts of extremely risky things. I have dozens of cases of Palestinians who’ve been badly injured on the job and gotten nothing – no medical treatment and no compensation.”

Still, as bad as work conditions tend to be on Israel-run building sites in the West Bank, Alenat told me that the fight to get hired was so desperate that some Palestinian job-seekers were known to inform on their rivals to Israeli authorities.

And they were all against the settlement freeze, such as it was, just like they’re no doubt all against the boycott, too. But not because they’re in favor of the settlements taking their people’s land, and not because they like Israeli soldiers being their masters. None of them like that, and most of them hate it. They have to feed their families, that’s all, so they swallow their pride.

I wish there were a way of ending the theft of the Palestinians’ land, and their freedom, and their pride by means other than the boycott. I have no desire to take away anybody’s job, Palestinian or Jew. But the boycott is working where elections, demonstrations, words, Palestinian non-violence and Obama all failed. If somebody can show me a way to bring down the occupation that doesn’t cost anyone his job – and that isn’t a proven failure – I will gladly support it. But no one has yet. So until then, I will see the boycott not as something to rejoice over, but as the lesser of two evils, the greater one being the humiliation Israel imposes on the Palestinians, even those who work at SodaStream.