When you believe your enemies hate you more than they love their children, as Golda Meir put it, there’s no real deterrence against them; you have to keep bombing. 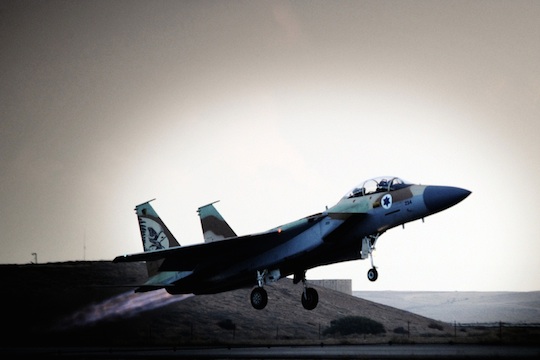 Most people in the West, I’d say, think that if Israel gives up the occupation, it will be healed. It will no longer be a danger to others and itself. Unfortunately, that’s not the case, and additional proof of this came Monday night when Israeli jet bombers again struck Hezbollah in Lebanon. The attack was another reminder that even if Israel were to get out of the West Bank and adopt a hands-off policy toward Gaza, it still believes it has the right to bomb neighboring countries to retard their military development, all the while Israel itself, of course, goes on building its arsenal to the heavens.

That won’t change if Israel signs a peace treaty with the Palestinians. Hezbollah will still be arming itself across the border, Muslim countries will sooner or later try to build nuclear weapons. And Israel won’t tolerate that; Israel will keep sending out the jet bombers (unless, as in the case with Iran, America puts its foot down).

Israel’s regional military policy – bombing Iraq’s embryonic nuclear reactor (which marked not the end of Saddam’s nuclear program, but really its beginning), bombing Syria’s embryonic nuclear reactor, killing Iranian nuclear scientists, killing Hezbollah’s military chief, bombing Hamas-bound arms convoys in Sudan, and, the latest obsession, bombing Hezbollah-bound arms convoys along the Lebanese-Syrian border – is more dangerous, at least in the short term, than the occupation. Any of these attacks could start a war, and eventually one of them is likely to do just that, unless you believe that Israel can go on hitting its neighbors indefinitely without them ever hitting back. (Since the 2006 war in Lebanon, the blowback has been limited to a Hezbollah terror attack that killed five Israelis on a tourist bus in Burgas, Bulgaria, and an Iranian attack on the Israeli embassy in New Delhi that injured the wife of a diplomat.)

Another way in which Israel’s regional military policy is a worse problem than the occupation is the complete acceptance of it by the country’s Jewish majority, and the apathy toward it from the Western world. That these attacks are acts of military aggression by a regional superpower using bombs to maintain its “qualitative edge” doesn’t seem to matter to anyone; Hezbollah is bad, Iran is bad, Syria is bad, they’re all bad, and Israel is good, or at least relatively good, so anything goes. (As long as it doesn’t backfire.) These enemies are “pledged to Israel’s destruction,” they’re “militant Islamists,” so Israel can attack them to its heart’s content. They don’t have to fire any missiles at Israel, they just have to possess those missiles (which are a pittance compared to Israel’s), and any Israeli bombing run on their territory automatically becomes “self-defense.”

It goes without saying that if any of the neighbors bombed Israel’s advanced weapons or killed its nuclear scientists or even tried to fly a spy plane through its airspace, which Israel does about every other day in Lebanon, it would be treated as an act of war, an attempt to destroy this country.

You would think that a nation which is so much stronger than its enemies, which attacks them time after time without getting hit back, would one day say: “What do you know – they’re afraid of me. That means I don’t have to attack them – I just have to sit on my military superiority and I’ll be safe. There’s a name for this, isn’t there? Oh yeah – deterrence.” Israel’s deterrence, as seen again in Monday night’s lethal, unanswered attack on Hezbollah, is absolutely incredible. Hezbollah, Syria, Iran – as much as they loathe Israel, as much as they’d love to attack it, not only don’t they attack, they very rarely lift a finger when Israel attacks them! Yet this country goes on doing it because it believes that if these enemies ever get even a fraction of the sophisticated weaponry Israel has, they will go for the kill.

The problem with this theory is it assumes that Iraq, Syria, Iran and Hezbollah (not to mention the Palestinians, who have been under attack 24/7 for nearly half a century) are willing to destroy themselves for the sake of destroying this country. Because no matter how strong they get, they will never be able to carry out a crushing, life-threatening attack on Israel, even with nuclear weapons, without ending up in smoking ruins themselves.

But Israeli policy is based on the assumption that its enemies are willing – no, eager – to pay that price. They are willing to die en masse for the privilege of annihilating the Jewish state. And there’s no deterrence against that, there’s only, as Prime Minister Netanyahu likes to call it, “vigilance.”

Yet what does this assumption say about Israel’s view of its enemies? That they’re not exactly human. They’re willing to sacrifice their entire country, their entire society, for the sake of destroying this one. What human society has ever been willing to do that? What species of animal has ever been homicidal to the point of collective suicide? Yet this is what Israel believes about its enemies, which is why it can’t stop bombing them. We’re up against a “culture of death.” As Golda Meir said, in one of the most beloved aphorisms of Zionist history, “Peace will come when the Arabs will love their children more than they hate us.”

This is what we believe: that the Arabs hate us more than they love their children.

There is a term for an attitude such as ours: “dehumanization.”

It is dehumanization of Arabs, of Muslims, that causes Israel to go on bombing its enemies even when those enemies don’t retaliate, even when they are incomparably weaker than Israel, even when it’s self-evident to Israel that those enemies know how weak they are and how strong Israel is. We bomb them because we know that if they ever stop being weak, they will kill us, even though they know we will kill them, too, because they don’t care. They hate us more than they love their own children.

They’re not human. There’s no deterrence against them. Only vigilance.