With a green light from the Supreme Court, Israel is set to a demolish an entire Bedouin village in the West Bank. Human rights advocates warn that the demolition would constitute a grave violation of international law. 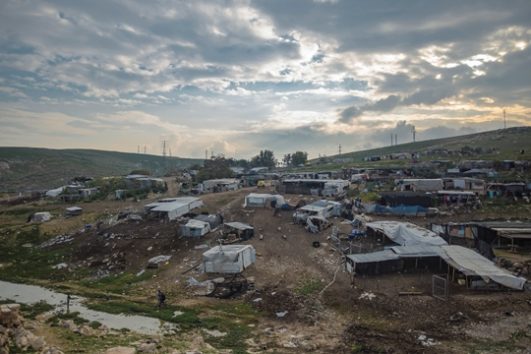 Israel’s Supreme Court approved a government plan to demolish an entire Bedouin village in the occupied West Bank last Thursday. Following the Court’s decision, army bulldozers may arrive at Khan al-Ahmar, the tiny Palestinian hamlet caught between the Israeli settlements of Kfar Adumim and Maaleh Adumim, any time after June 1.

The ruling follows two lawsuits filed by Attorney Shlomo Lecker on behalf of the residents of Khan al-Ahmar against the demolition plan.

“It is clear that this is a crime,” Lecker said on Sunday, adding that he thought the court’s ruling opened the door to intervention by the International Criminal Court in the Hague. “Until this case, I didn’t see the possibility of that, but this ruling is something new in terms of that option.”

According to Lecker, the court’s decision creates a precedent that threatens thousands of Palestinian Bedouins living in Area C of the West Bank, where Israel is attempting to forcibly expel Bedouin communities and move them into Palestinian cities and towns. Between 180,000 and 300,000 Palestinians live in Area C, which makes up over 60 percent of the West Bank and is under full Israeli military control.

For nearly a decade, the residents of Khan al-Ahmar have been fighting the Israeli government’s attempts to demolish the Bedouin village and forcibly transfer its inhabitants to an area adjacent to a garbage dump near the West Bank town of Abu Dis. The village has become an internationally-known site of resistance to Israel’s practice of forcibly transferring Palestinians out of Area C, and, in the past, pressure by American and European diplomats succeeded in helping to stave off the demolitions.

Prior to Thursday’s ruling, the Israeli government was required to propose a viable new location for the displaced communities, Lecker explained. Yet following the ruling, in which the judges acknowledged that the relocation plan for Khan al-Ahmar was not implementable, this is no longer the case.

“This ruling says something very simple,” Lecker continued. “The state does not have to provide any alternative at all.”

The round of lawsuits that ended last week began in 2009, after an Italian NGO helped build a tires-and-mud school for the children of Khan al-Ahmar and the surrounding villages. When a lawsuit filed by Lecker prevented the demolition of the school later that year, the nearby settlements of Kfar Adumim, Alon, and Nofei Prat, as well as the right-wing NGO Regavim, demanded that the High Court force the Israeli government to carry out 257 demolition orders issued against Palestinian structures in the Bedouin community, including the school. 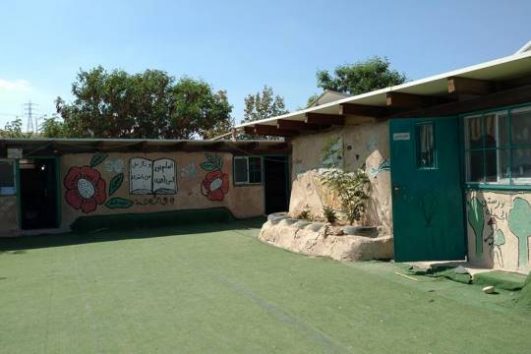 The years-long legal battle that ensued prevented the school, and the entire community, from being demolished. But in August of 2017, Defense Minister Avigdor Liberman announced that his ministry was preparing to demolish Khan al-Ahmar, as well as the village of Susiya in the South Hebron Hills.

In response to Defense Minister Liberman’s announcement, Israeli human rights group B’Tselem sent a letter to Israel’s prime minister, defense minister, justice minister, and top military officials, warning that the forcible displacement of the two Palestinian communities “would constitute a war crime committed at your instruction and under your responsibility, and for which you would bear personal liability” — a considerable escalation in the NGO’s rhetoric.

B’Tselem’s decision to use “war crimes” terminology to describe Israel’s actions comes at a time when the ICC prosecutor is currently conducting a preliminary examination into Israel’s actions in the occupied territories, specifically the settlements and forcible population transfer, among other alleged crimes.

On Sunday, B’Tselem strongly condemned the Supreme Court’s approval of the plan to demolish the village. “This decision removes the final barrier that prevented Israel from carrying out the demolition of the community, defined by international law as a war crime,” the organization said in a statement. “The personal responsibility for this crime falls not only on the policymakers, but also on those who paved the judicial path for it.”