Over a 160 people killed, entire neighborhoods which receive arbitrary warnings, entire families that have been bombed using hundreds of tons of explosives, shooting at a journalists’ car  and hitting hospitals and schools. No, we do not only shoot  at Hamas targets.

On Saturday evening, Hamas issued a warning, saying it was going to bomb Tel Aviv at 9 p.m. It did, and luckily the rockets were intercepted by Iron Dome. Sunday morning the IDF issued a similar warning to all residents of “the northern Gaza Strip,” saying it will attack the entire area at noon. Can anyone see the difference? Does saying you’re going to attack a civilian area exempt you from responsibility for the civilians you target? I don’t think so.

But let’s start with the facts: so far, IDF bombing of the Gaza Strip has killed more than a 160 people, of whom at least 24 were children and infants. 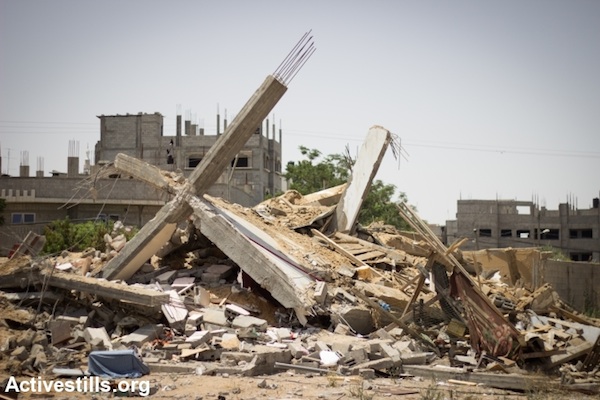 A large proportion of the bombings is directed at residential buildings. Sometimes a warning is provided and sometimes it isn’t.  And according to the military, in at least one occasion it was in error. A mistake that killed eight members of a family. In some cases fire was directed at homes in which Hamas members live, and in the process many members of their families and passersby have been killed.

Sometimes the army announces its intention to attack a home but it simply just doesn’t. Journalist Abeer Ayyoub and her family waited 24 hours (and perhaps they’re still waiting) in trepidation and fear of a bombing of neighbor’s house who has received a telephone warning (Ayyoub reported her account in Haaretz).

In addition, several days ago the army sent messages to about 100,000 Palestinians who live in areas relatively close to the border fence and called on them to leave their homes. It’s difficult to imagine that an area in which 100,000 people live, is in its entirety, a Hamas “terrorist den.”

On Wednesday, the army killed journalist Hamdi Shehab, an employee of News Media 24, while he was riding in a car with other journalists on the way to cover an event. The other journalists were injured. The car was clearly marked with big red letters saying “TV”.

Responding to an inquiry from +972, the IDF Spokesperson’s Office’s only response was to say that “the army doesn’t attack civilians, only terrorist targets.” I asked if there was an intention to hit that particular car at all, whether Shehab himself was a terrorist target or was it someone else in the vehicle? If the answer is yes, I wanted to know whether the categorization as terrorists was related to their work as journalists or some other reason. The IDF Spokesperson refused to answer any of these questions. By the way, to date, Oren Persico of “The Seventh Eye” has not received any answers to his questions about the killing of three Gazan journalists during Pillar of Defense. Unlike the case of those three, I’m not aware of any links between Media 24 and Hamas.
Among the sites affected by the bombings: five hospitals and clinics and 32 schools.

One last thing: every woman and man who writes or is being interviewed from Gaza in various media outlets shares the same experience: we are all a target. The shooting is directed at dwellings. There is no way of knowing if you will be hit, when, how, where or why.

‘Roof knocking’ is not a solution

So what have we got? Shooting at the houses of entire families, sometimes without warning. Warnings that sometimes do materialize and sometimes do not. So people cannot decide whether to stay at home or to leave, and if so, for how long. Warnings given to entire areas, not limited to a specific purpose or for a certain time – and even if there were limited – are illegal. A shooting that killed a journalist without an explanation. Over 150 killed, many of whom were civilians and lots of children. And an entire community that senses it has no safe place in which to hide.

The point must be made clearly: the fact that the army has decided a certain building or neighborhood is a target for bombing does not automatically makes those places legitimate targets. Text messages, “roof knocking” bombs or even candy thrown from airplanes does not release us from the responsibility for the lives of the citizens whose crowded homes we have showered with hundreds of tons of explosives in a few days. The mantra of, “why do they not leave their homes,” so prevalent in the past two days in the media and social networks cannot, and will not, be the ultimate panacea for cleansing our consciences. 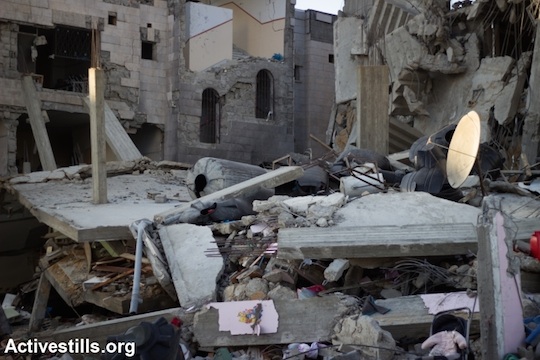 All this is not meant, heaven forbid, to detract from our recognition of the terrible suffering of the residents of southern Israel, who are also the target of arbitrary, illegal and intolerable attacks against civilians. They have always had suffered this and in recent days we, who live anywhere as far north as Hadera and Jerusalem, have also been suffering, albeit to a lesser extent. At least we have the Iron Dome system, which is a good thing. We have to be grateful for all the lives that it has saved, even if it makes it easier for politicians to launch wars that we could do without.

But the solution to the rockets and mortars from Gaza and the dread with which southern residents live, surely cannot be the killing of innocents in Gaza and forcing its inhabitants to live in a horrible fear and dread themselves. Recently a unity deal between Fatah and Hamas was signed, giving both parties significant public legitimacy that neither had for a fair while. The current Palestinian government is willing to take the path of negotiations for peace based on a two-state solution. Israel is the one who does not recognize this unity. Israel is the one who took advantage of the abduction of the three youths to launch an unrelated operation against Hamas, and it is now continuing along that path of war instead of negotiations.

The military operation should be halted now in the context of a ceasefire deal with  Hamas. Proper serious negotiations with PLO Chairman Mahmoud Abba should be commenced immediately. This, more than anything else, will bring real peace to the residents of Gaza and Sderot. It will not happen tomorrow and not the day after but if we want long-term solution, not a short-term solution until the next ceasefire violation and the next assassination and the next operation in a month, six months or two years, this is the only path we have.

Read a version of this article in Hebrew on Local Call.