Yuval Ben-Ami and his gang are going where no man or woman has gone before: They are trying to produce a bilingual, bi-national album based on the songs of pop prodigy Lorde. The only problem: The gang itself is homogenous to the core. An insurmountable challenge? 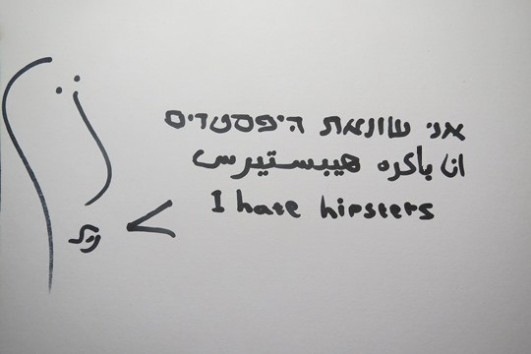 A week after our Yemenite feast, I met with Yaron to start working out the details. “I have a title for the EP,” I told him, “I want it to be ‘העונה לתספורת קצרה,’ that’s ‘Buzzcut Season,’ the name of one of Lorde’s songs. I think it’s her best.”

Yaron was fine with that.

There was of course, the other thing. “I Think it should be named ‘Buzzcut Season’ in Arabic, too. I want it to be a co-production, Palestinian-Israeli. Anything that has to do with Lorde is out of control. The world may find this interesting, and if it does, I don’t want for it to be exclusively Hebrew, Jewish-Israeli. I’m over that.”

We were sitting at the cafe across from my house, in the largely residential heart of Tel Aviv. The environment here was far more homogeneous than in the Yemenite quarter. You never know what someone’s backgrounds is, but everyone at least appeared to be central Tel Aviv Ashkenazi.

Yaron, ever open minded, reacted just as fondly. “I have a contact for Mira Awad,” he said. “Maybe she’d like to get involved.”

It sounded too good to be true. Mira Awad is something of an actual star. A Palestinian citizen of Israel, she is known for her openness to collaborate with Jewish-Israeli musicians. She even represented Israel at the Eurovision song contest, alongside Hebrew songstress Ahinoam Nini, known internationally as “Noa.”

“So that’s great,” I said, “We have Mira Awad. Now all we need is someone to translate a few songs into Arabic for her.”

“We don’t have Mira Awad,” Yaron said, throwing cold water on my sudden confidence, “I have a contact for her. That’s all.”

This rang a bell. In a recent episode of “South Park,” the gang of cartoon misfits decides to throw a party to boost their popularity. One kid, Stan, tells his peers that a colleague of his father is Lorde’s uncle, so he could probably get Lorde to come and play at their party. From that moment on, Lorde’s performance is an uncontested fact. When the party’s refreshments are banned due to a nationwide glutton hysteria, Cartman comforts the others by reminding them, “We still have Lorde.”

I came out a Cartman. Dang.

“Actually,” I said, “I already found someone who would help us with translations. I got in touch with Hanin Majadli.”

I thought the name would require an introduction. Hanin isn’t a celebrity of the Mira Awad kind. She is, to me at least, more of a social media celebrity: an outspoken Arabic teacher in Jaffa and one-state activist who enjoys offering her vision to her often-hostile Hebrew Facebook feed. In this land of limited discourse, such things cannot be ignored. Yaron knew who she was. He appeared, in fact, rather curious.

Hanin was free to meet and suggested a Jaffa cafe named “Casino San Remo.” We rode down there in Yaron’s car, humming to Mark Knopfler through Friday traffic. I warned him that she has a habit of being very fashionably late to social functions, and we each postponed the rest of our day’s plans while waiting for a table.

This place was even “whiter” than the one by my house — attesting to Jaffa’s gentrification and Judaization, but it was nice and buzzing and in the full hour we waited for Hanin, another friend, Yael, randomly bumped into us and joined our table. I met her long ago at a poetry event. She was a soldier at the time.

Hanin arrived in a foul mood, clearly because, at Yaron’s advice, I texted and rushed her. She confessed to recovering from a proper Tel Avivian night out, but was dressed to kill and made up aristocratically, strongly clashing with everything around us. “I hate hipsters,” she blurted out. “I hate this place.”

“It’s you who suggested we come here,” I noted.

“I thought you would feel at home,” she replied.

Yael listened on silently as the three of us spoke about Lorde. We did so in Hebrew. Like most Palestinian citizens of Israel, Hanin’s Hebrew is spectacular. Like most Israelis, Yaron and I can hardly utter a word in the chief language of the Middle East, the region in which we were born and have lived our entire lives. Feeble attempts were made to teach it to us in school, but we generally had too much of an attitude to listen. My sixth-grade Arabic teacher, Vicky, gave up after the third lesson, and would just sit out the period for the rest of the year, while we all yelled.

It turned out that Hanin had never heard of Lorde before I wrote her. She listened to the songs I sent and liked them, but was critical of my approach. “It’s not like you discovered her,” she said, “so quit talking about her being from New Zealand. She’s an international sensation.״

“Listen.” I tried to defend my case. “When I saw her live in Paris she seemed amazed at having thousands of Parisians cheer for her. I mean, it’s one thing to conquer the world, it’s a totally different thing to conquer Paris. So she stood there and said things like: ‘This is so special, it’s unbelievable. You see, I’m from New Zealand.’ This is what she said. She didn’t say ‘I’m 17,’ which is what’s really mysterious here, that she is so good and made it so far at 17. She was herself baffled that someone from New Zealand made it in this way. New Zealand is significant here.” 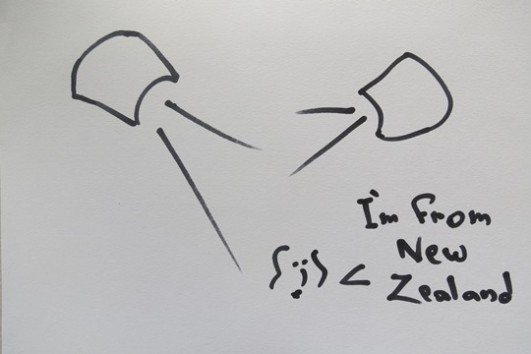 Yaron agreed. “What has ever come of New Zealand? Nothing! At least not musically.”

“There’s Flight of the Conchords,” I argued.

Something occurred to me. As Israelis, we instantly recognize the pride in being from the little country that could, in proving that it could. We find it obvious: when Maccabi Tel Aviv wins the European basketball cup, or professor Aumann of Hebrew University of Jerusalem is awarded a Nobel Prize — communal joy abounds. Hanin, a Palestinian citizen of Israel, does not belong to the same category as Aumann, or even quite to that of Gaza-born Arab Idol winner Muhammad Assaf. When those who share her citizen-Palestinian status “make it,” it is often as symbols of coexistence, alongside Israelis such as Noa. She may never have experienced national pride nor national humility in quite the same way we do.

Or perhaps (I did a lot of assuming here — these things are sensitive. It’s scary to bring them up) she finds the ring of “New Zealand” on my tongue too similar to how I would say “Nablus.” Both are such faraway, exciting places for the adventurous Israeli. Lorde is a rare Kiwi, Hanin: an over-exoticized Arab, sick and tired of being discussed romantically.

“Okay,” she said, “I’ll translate, but I’d rather we don’t do it with Mira Awad. I don’t want to be part of a feel-good peace dance-along. I can get you a much better singer.”

We agreed, for better or worse, and got up to leave. Sweet Yael bid me farewell and headed off on her bike. She hardly spoke the whole time we were there. It occurred to me why she stayed, why she listened. Our schools are segregated, our paths seldom cross. This may have been the first time she had ever shared a table with a Palestinian. Lorde was already doing some good around here.