The Green Line disguises the fact that Palestinians in Gaza are no longer being oppressed outside the Israeli state, but are being caged and brutalized inside it. 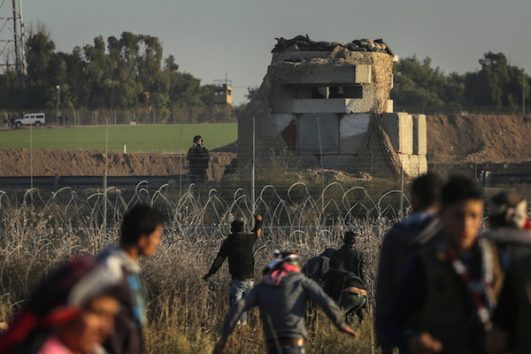 Palestinian protesters inside the Gaza Strip throw stones in the direction of an Israeli military position on the other side of the border fence, Gaza Strip, December 8, 2017. (Ezz Zanoun/Activestills.org)

Palestinian activists have long criticized the use of the word “border” to describe the 1949 armistice line that divides Gaza and Israel, and which protestors in the Great March of Return have been trying to cross at great risk to life and limb. By invoking the term, Israel insists that its open-fire policy toward the march is part of its legitimate right to defend its sovereignty and security. It further claims that, because the government dismantled its settlements in 2005, it no longer occupies the Strip and therefore bears no responsibility for its conditions.

These are disingenuous arguments. Israel’s blockade and control of Gaza stretches from its eastern and northern land crossings to the Mediterranean Sea in the west, with Egypt controlling the south. What it calls a “border” is actually a militarized network of naval ships, barbed wire, electronic barriers, lethal no-man zones, and surveillance systems that operate as the fence of an open-air prison. In legal terms, Israel retains “effective control” of the Strip (including people’s movement, its airspace, flow of goods, and other needs of daily life), and therefore remains its occupying power. 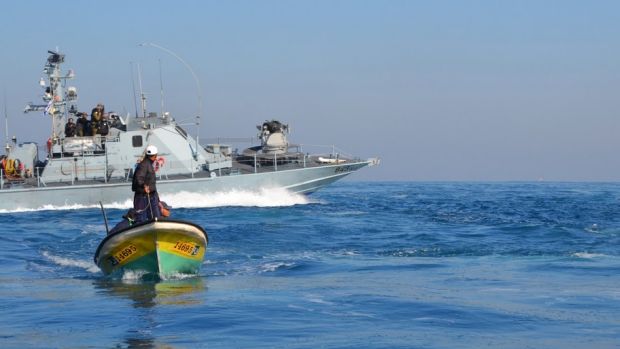 The human rights community has spent years articulating the nature of Israel’s occupation under international law and the responsibility of third-parties to end it. The law, however, is only worth as much as the will to enforce it; and half a century later, these efforts have failed to produce meaningful outcomes. It is not that the law is incorrect, but that it has been unable to mobilize political action or make Israel’s military rule less sustainable.

The Palestinians’ own ambiguities about the Green Line have further complicated matters. We focus on the military structures that have spawned since 1967, yet emphasize that the real problem is 1948. We cite Israel’s obligation to abide by international law, but chastise the law for being useless in practice. We combine settler colonialism, occupation, and apartheid as lenses to explain the ongoing Nakba, but arrive at different conclusions for what the solution entails. These debates are natural, but they also muddle the struggle’s priorities and the discourse it promotes.

Exploiting these uncertainties, Israel has turned Gaza into an area that is simultaneously separated from and annexed under Israel’s control. It is a purgatory designed to provide whatever answer is most convenient for shirking responsibility and justifying violence at any given time. This has obscured a controversial but perhaps inexorable fact: after 51 years, Gaza can hardly be described as “occupied territory” anymore. It is now a segregated, debilitated, and subjugated part of Israel; a replica of the districts, townships, and reservations that imprisoned native populations and communities of color in apartheid South Africa, the United States, and other colonial regimes. In other words, Palestinians are no longer being oppressed outside the Israeli state; they are being caged and brutalized inside it. 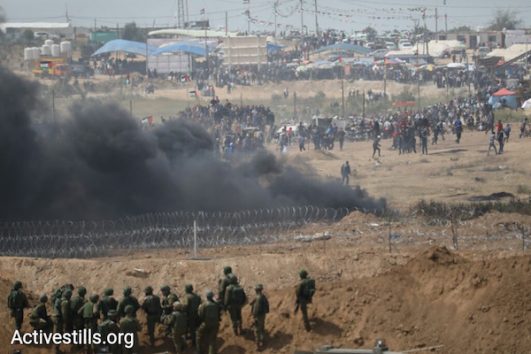 The Green Line has been key to disguising this complex system. Like the de facto annexation of the West Bank – where Israel’s growing settlements and military presence have similarly made the “border” there non-existent – Gaza has effectively been absorbed into Israel’s political jurisdiction. Hamas, like the Palestinian Authority, is viewed as a pseudo-government of hostile “enemy aliens,” but one that can be managed in Israel’s domain so long as it is contained behind the fence. The thousands taking part in the March of Return are not “infiltrators” trying to breach a sovereign state, but displaced and disenfranchised “citizens” breaking out of a state-built ghetto. The army is not holding off “foreign invaders,” but is killing and suppressing its own native subjects.

This framing is crucial to understand the scale and severity of Israel’s policies, and to devise stronger paths to correcting their injustices. By tearing off the mask of the Green Line, Palestinians and their allies can reverse Israel’s efforts to isolate Gaza from the West Bank and to deny its people’s rights to their ancestral homes. What Israel fears more than a Palestinian state is a Palestinian population it cannot disown, and the myth that Gaza is “separated” from Israel helps it to balance that fear. That myth must be broken, and that racist fear must be exposed. Doing so would also reveal the political solution: if Palestinians cannot win their independence along the Green Line, they will demand their full equality beyond it. The March of Return is doing just that.