Do not be misled by the paranoid helplessness of the six powerful men in Dror Moreh’s film – the end goal of Israel’s military rule is the complete demise of the dream of Palestinian independence. 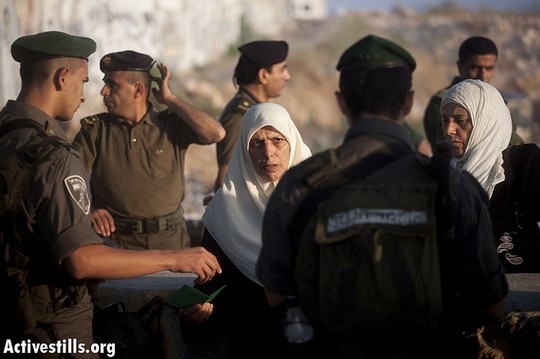 Ami Ayalon, former head of the Israeli Shin Bet, grew up on a kibbutz near the Sea of Galilee. “I had a wonderful childhood,” he says toward the end of Dror Moreh’s Oscar nominated documentary, “The Gatekeepers”:

I knew that there’s a house in Jerusalem, and on the second floor there’s a long corridor. At the end of the corridor there’s a door, and behind the door is a wise man, who makes decisions, who thinks. Years later, after the Yom Kippur War [1973], I went to Jerusalem, and I went to that same building. I was on the second floor, and found no door at the end of the corridor, and behind the missing door, no one was thinking for me.

Ami Ayalon is one of six former heads of the Shin Bet who are the protagonists of Moreh’s highly praised documentary. Again and again, they repeat the same lesson: no one is navigating the ship; we (i.e., Israel) have no strategy, only tactics; we are winning the battles but losing the war. The film’s main contention is that Israel, and its security apparatus, has merely been responding to changing circumstances, chasing the next threat. Rather than shaping its political reality, Israel has been passively shaped by it.

Breaking the Silence, a veterans’ group of which I am a member, has collected testimonies from more than 900 hundred IDF soldiers. At first sight, the testimonies of hundreds of soldiers seem to accord with the diagnosis of the six gatekeepers. In describing their missions and experiences in the occupied territories, Israeli soldiers constantly invoke the notion of “prevention” and the importance of “showing presence” to deter any hostile attack. Military force is ostensibly exercised to preempt organized Palestinian resistance, to thwart the next blow, not in order to change the landscape or set new facts on the ground.

But it is a mistake to conclude from this that Israel is in fact a slave to threats against its security. Analyzing the soldiers’ testimonies helps to extrapolate the systemic features of Israel’s military rule. IDF soldiers are a particularly valuable source of information because they are not mere witnesses of military rule: We are the men and women who carry out the orders, who implement the instructions. We embody military rule. By listening to what soldiers have to say about their own actions, we can connect words with deeds and actions with consequences. One of the main lessons we learn from what soldiers tell us is the true meaning of “prevention.”

The testimonies show that seemingly defensive terms such as “prevention” and “deterrence” are used to describe and justify almost any use of military force by the IDF. Behind this sweeping interpretation lies the assumption that every Palestinian, man and woman, is suspect, constituting a threat to Israeli citizens and soldiers; consequently, the thought goes, deterring the Palestinian population as a whole, will reduce the probability of opposition and thereby prevent hostile activity. Thus, “preventive” military actions are not only ones that address immediate threats, but all actions which fall under this overarching strategy.

On grounds of prevention, we, Israeli soldiers, control the movement of people and goods through the separation barrier and within the occupied territories; we decide whether and which businesses open; we decide how children are transported to school and university students to their campuses, and how people in need of medical attention will get to hospitals and clinics. We impose preventive curfew. We preventively take over the property of hundreds of thousands of Palestinians. Houses, agricultural land, vehicles, electronic goods, and farm animals may all be taken at the discretion of a regional commander or a soldier in the field, as preventive measures. We carry out preventive assassinations, arrests, and  “mappings”—operations in which we enter every house in a given neighborhood or town and line up all the residents to take down ID numbers and names to be handed to the Shin Bet. These operations occur even in areas that are officially under the complete control of the Palestinian Authority.

Even the ongoing project of Israeli settlement and expropriation of Palestinian lands in the West Bank is portrayed by many as “forced” upon the state of Israel by the settlers themselves. But the West Bank settlements and those who inhabit them have been encouraged, enabled, orchestrated, protected, and armed, by Israeli authorities. Indeed, the very distinction between Jewish settlers and Israeli authorities is cast into doubt by soldiers’ testimonies about operations initiated by armed settlers and briefings given by settlers’ security teams. The settlements’ project is part and parcel of Israel’s military rule: by taking Palestinians’ lands and natural resources the settlements and the settlers tighten Israel’s grip on Palestinians. Thus, the settlements are a feature of Israel’s strategy of “prevention.”

The Israeli security apparatus has effectively defined offensive, unprovoked, military action out of existence. Israel seems to imagine any possible action it might take as one that is a reaction.  This rationale is common to the 18-year-old private, to military generals, to Ami Ayalon, and to the other former heads of the Shin Bet. In fact, “prevention” is not used as a description of Israel’s actions, but as a name for Israel’s strategy of military rule.

We, Israeli soldiers, rule Palestinians in the West Bank and Gaza Strip through constant intimidation, threats, arbitrary violence, and disruption of normalcy. These “preventive measures” constitute Israel’s strategy of control. The settlements, which we protect, enable, and expand, manifest and deepen Israel’s control over the Palestinian people and territories. The picture that arises from the testimonies of hundreds of IDF soldiers is unequivocal: The end goal of Israel’s military rule is the complete demise of the dream of Palestinian independence. Do not be misled by the paranoid helplessness of the six powerful men in Dror Moreh’s film: having no strategy is a strategy.

Oded Na’aman is a member of Breaking the Silence and served in the Artillery Corps of the Israeli army from 2000-2003. He is currently writing his PhD in Philosophy at Harvard and is co-editor of Our Harsh Logic: Israeli Soldiers’ Testimonies from the Occupied Territories, 2000-2010. He is also a member of the Israeli Opposition Network.