Breaking the Silence, an organization of veteran IDF soldiers working to expose the everyday reality of the occupation, is releasing a new book of soldiers’ testimonies from the years 2001-2010.

The collection of 101 testimonies shows the degree of control Israel has over the lives of Palestinians. Unlike previous publications by BTS, this one is not about war crimes. More than anything, the testimonies reveal the banalities of the Occupation: the roadblocks, the nightly raids, the mass arresrs and the daily humiliations which take place everywhere in the West Bank.

The book is divided into four chapters, corresponding to the four code-words given to IDF operational modes in the West Bank, “separation,” “fabric of life,” law-enforcement” and “prevention”.

The following are four testimonies reprinted in full from each section of the book (An English edition will be out soon; these testimonies are taken from an advanced copy). The testimonies are followed by links to commentary posts by +972 magazine bloggers. We will post more testimonies in the next few days. 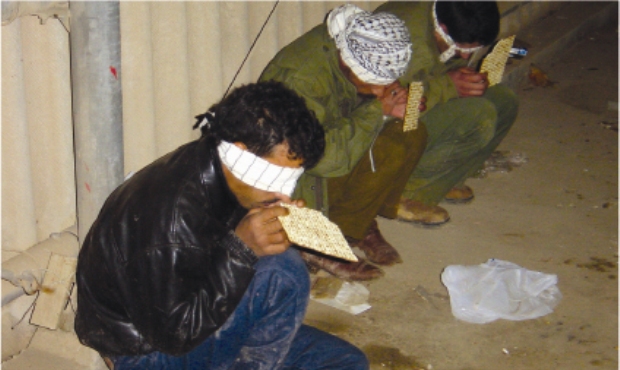 Palestinian prisoners, 2002 (photo taken by a soldier of the armed corps. Source: Breaking the Silence)

We had all kinds of situations of very dubious work in Area A [i.e. under the control of the Palestinian Authority]. If that means going in on Friday, when the market is packed, in Tubas for example, to make a checkpost – a surprise checkpoint – in the middle of the village. One time, we arrived to make a surprise checkpoint like that on Friday morning, and we started to spread out as if at a checkpoint: inspecting vehicles and every car that passed. 300 meters from us a small demonstration of kids who were throwing rocks started, but they went maybe ten meters, and weren’t hitting us. They starting cursing us and everything. At the same time people start gathering. Of course it was followed with the aiming of weapons at the kids, you can call it self-defense.

What was the point of the checkpoint?

To show the presence of the IDF inside the village. Inside the village, where the women go shopping, where the children play, just to show presence, and to enter a firefight, which within a second we didn’t know if we would get it there. In the end we got out  without  a  scratch,  without  anything  happening,  but  the  company  commander lost it. He asked one of the grenade launchers to fire a riot control grenade toward the demonstrators, the children. The grenade launcher refused, and afterwards he was treated terribly by the company commander. He didn’t receive a punishment because the  company  commander  knew  it  was  an  illegal  order,  but  he  was  treated  really disgustingly by the staff. In the end that’s how it ended. Another story was going into Tubas at three in the morning in a safari, with stun grenades and just throwing them in the street. For no reason, waking people up. 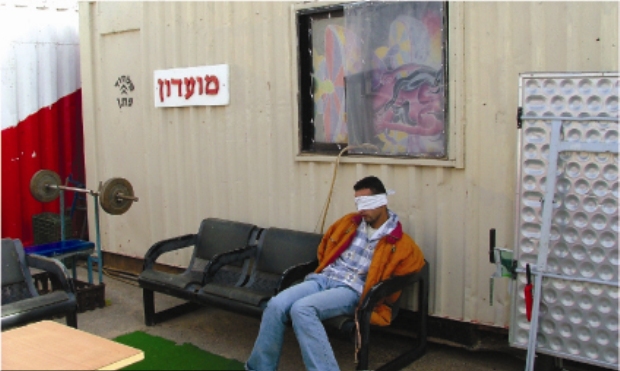 A Palestinian prisoner held at a paratroops base in the West Bank (photo: Breaking the Silence)

Testimony 5. What is it if not a ghetto? Unit: Paratroopers Location: Qalqilya Year: 2004

As an instruction officer I would go around the tactical headquarters of the battalion commander, it was actually very interesting. The battalion commander would ask a lot of questions, talk with people. It was my first, and I think also his first, certainly my first, interaction with the separation fence. We would go around at night on a jeep, to get to know the sector, and he would ask, see that basically there are villagers that can’t cross, and it’s their work. He would stop, all of sudden see some family sitting in their yard. “Tell me, how do you get to this and that?” And they would say, “You can’t get there.” “No, but what do you mean you can’t get there? You certainly need to, so how do you get there?” “No. you don’t get there.” He would talk a lot with the residents there. Or they would close routes up on them, the central artery of some village. Just like that, the fence would close it off.

What was your reaction?

That’s something less army-related, it’s about policy, it’s the path of the fence. Again, it’s an understanding of how terrible a thing it is. Especially in Qalqilya, the area of Qalqilya, is closed on all sides and it has only one gate. Enclosed with a wall and a fence. It won’t help, what is it if not a ghetto? It’s just closed. There is one gate, maybe there are more gates. When I was there they decided, there was something, they decided there would be no more gates, that they are closing them. There is one gate through which they exit and enter the city, Qalqilya. Indeed, it’s not Nablus, but it’s a big city. Among the small ones, but it’s still a city, with a lot of residents. 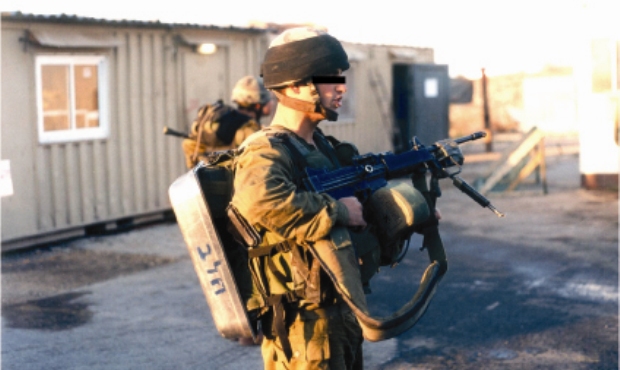 A soldier prepared for a "presence" patrol in a Palestinian village with a Casserole, used to create noise in the village. 2004, Bateer (photo: Breaking the Silence)

“Working with the people” is a nice turn of phrase.

Yes. Work over. That was what there was to do. Then all of a sudden, when they built the fence there was no population. There was the Israeli population who you have to be careful with, there is Barta’a which you could still a little…

So the operations move to Barta’a?

A little more, yes. But again there was the tendency with Barta’a, they kept Barta’a for the IDF, so the work was mostly along the fence.

And when they caught someone?

Then we went in. If you capture someone then you can go in. Really the majority of the time when I saw the violence was in the period before the fence, when it was just routine. Pouring out the kids’ bags and playing with their toys. You know, to grab one and to play “keep away with their toys.”

Did the kids cry?

All the time. They cried and they were afraid. Meaning, you couldn’t miss it.

The adults cried too?

You saw situations where people went to the bathroom in their pants?

From being beaten, for the most part. Being beaten to death, and threatened, and screamed at, you are just terrified. Especially if it’s in front of your kids, they yell and threaten and scare them, so you also are scaring the kids. One time, again, there was some man we stopped with his kid, the kid was small, like four or something. They didn’t beat up the kid, but the policeman was annoyed that the adult brought the kids so they would have mercy on him. He says to him: “You bring your kid so they’ll have mercy on you, let’s show you what that is.” He goes and beats him up, screams at him, saying, “what, I’ll kill you in front of your boy, maybe you’ll feel more…” It’s terrifying. Again, there are a lot of stories of honor.

Did he piss his pants out of fear?

In front of the boy.

Where did they talk about it, in the cafeteria, in front of the officers? Was it openly?

It was openly. I think that if an officer says that he didn’t know, he’s totally lying. At the officer, the high ranking officers knew. The platoon commanders had less to do  with  it,  but  the  company  commander,  the  assistant  company  commander,  the operations officers – even encouraged it to a degree. Again, not directly, they didn’t come and say, yalla beat them up, but there was a kind of legitimization, otherwise it wouldn’t have happened. Again, it’s a fact that it happened less in Jenin, and in my opinion not just because there was less work with the population. 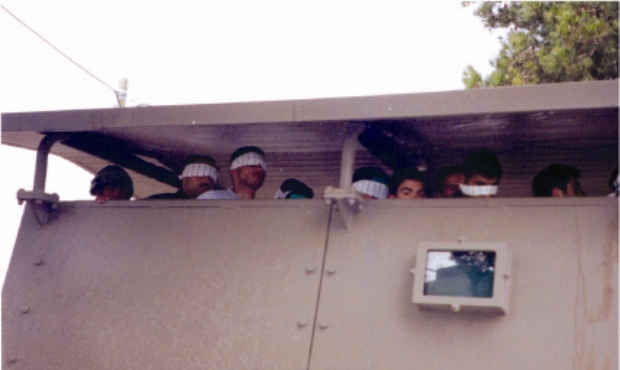 Palestinian prisoners held at the back of an army vehicle near Ramallah (photo: Breaking the Silence)

Testimony 4. He is basically a civilian, and he’s telling the army what the laws are. Unit: Maglan Special Forces Location: South Hebron Hills Year: 2002

I did settlement security detail with soldiers in Eshkolot, and in another settlement nearby. It wasn’t in Eshkolot, I don’t remember what settlement it was. But when we were there, there is the settlement, and some [Palestinian] village that’s a kilometer or two away. And [the Palestinians] work their land in the area there, 500 meters away in the valley below. The settlements sits on the hilltop, and below in the valley there is some… they work the land. What I remember, it’s a little hazy, that one time they were there working the land. They come, all of a sudden [the settlers] go out – this is already past the fence of the settlement, although it was exactly where the expansion was… so we ran to where the expansion was, where it was under construction… They just yelled at them… they didn’t shoot or anything, but they ran them out of there. I don’t know if they left.

The  [settlement’s  civilian]  security  coordinator  came,  called  us,  deployed  us,  me and the soldier…“this and that, they are crossing the border, they are scouting, they are…” Like I know? In short, he yells at them, I don’t know if they left. But I remember he came, and started yelling at them: “get out of here, get out of here.” Later I go on patrol with him in the vehicle, so he sees a little girl playing at the entrance to the settlement, on the access road into the settlement but still below it, still outside the fence – it was totally not part of that settlement – but from below, in the valley. He sees a girl, I hear him yell something at her in Arabic, from the megaphone, something like “Rasak.” I didn’t understand. I go to him: what did you yell at the girl? So he goes: “If you come around here again I’ll break your head.” Something like that. The situation there is basically your commander is that civilian from the settlement who tells you what’s allowed and what’s prohibited, where they [the Palestinians] can be, where they can’t be – he gives you authorization to shoot in the air, although in principle I am the senior army commander – as senior as that is, right? – in the field he can tell them to shoot, and also, with discretion. But in principle, he delineates policy. It’s not some military authority, some company commander, an officer in the area, it’s the settlement security officer coordinator who decides what is allowed and what is prohibited. It’s a pretty funny situation when you think about it, where a civilian tells the army what its limitations are and what the laws are.”