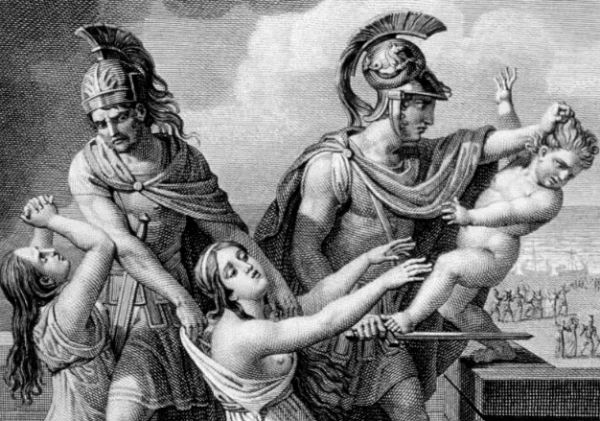 An engraving of the killing of Astyanax, as described in "The Trojan Women" by Euripides

As any cultured person knows, the word “tragedy” originates in the world of theatre. Ancient tragedies were plays, written in dialogue.

Contemproray tragedies are also written in dialogue, but they are not always works of poetry. The Israeli organization “Breaking the Silence” (Hebrew: “Shovrim Shtika”) is this week publishing its greatest tome to date, entitled: “Occupation of the Territories; Israeli soldiers’ testimonies, 2000-2010.”

The book’s 350 pages are filled with accounts given in Q&A form. One voice is that of a soldier, distraught with his own actions or with things he had seen while serving in the West Bank or Gaza. The other is that of a BTS activist, helping him complete the account.

All activists were once in the soldier’s own position. BTS is the voice of the IDF’s conscience. Others, here and elsewhere, will do a better job than I in describing the organization, as well as going through the collected accounts and analyzing them. Mine, as a cultural critic, is a different job. It would of course be a cynical act to treat the tome as a work of literary non-fiction and “review” it, but something has to be said of its impact on the reader, and that impact is that of a tragedy.

Allow me to translate a short portion of dialogue from beginning to end. It is one that does not even involve any killing or wounding. Its subject are orders given to soldiers as they take over houses of Palestinian families for various combat functions.

And then came the instruction: you may cause damage, but you may not steal.

What does that mean?

Because what would happen is that soldiers would simply steal.

What does that mean: “you may cause damage”?

Could I tip a closet?

For the sake of the mission – yes, to make sure that there’s nothing in the clothes and there’s no one behind it. That I could do, but I was not allowed to steal.

And where does one draw the line?

This is the thing, that sometimes people would do it for fun – shooting television sets, my paratrooper friends would tell me that they would lay on rooftops in Nablus and shoot solar water tanks to see how they’d explode, or people would steal CD players and steal dollars.

When the tragedy is real, when it’s life, there’s very little need for an experienced editing hand. I’m actually not fond of how BTS edit their reports. Their records are strongly in need of footnotes for those unfamiliar with IDF lingo, and could benefit from short summaries, to be added above each dialogue.

But here I go, treating this as I would a book. This is not a book. It’s not a play. It’s life and as such it edits itself: Notice how the soldier begins with the clear order not to steal, as though pointing a limit placed on the harm done to the residents of the occupied house. Gradually it appears that the restriction is pretty much meaningless. What isn’t stolen – will be demolished by gunshots.

Finally we learn that stealing occurs nevertheless. The moral spine of the soldier, which is this short play’s tragic hero, was broken down as soon as the order was given to enter the house. Like Oedipus, who gradually picks up the details of his own disaster from strangers, the soldier himself would only confront this truth much later, when speaking to a BTS activist.

The tragedy described in the book is too long for the stage, but the avant-garde directors of the occupation heeded the challenge and are producing it in the great outdoors theatre of Palestine for 43 years now. The voices booing them are drowned by the general applause, yet the critics are there. They’re taking record of what’s happening. They are making an effort to print and bind this information and put it at the hands of the public, all in order to end this theatre of cruelty and defend the human spirit.

Breaking the Silence: The testimonies (part I)