After being arrested in a Palestinian demonstration near Hebron some time ago, I was handcuffed, blindfolded and then sat in the direct sun along with another Israeli activist. After some time, an IDF commander arrived on the scene and asked one of his soldiers, “why are those two in the sun?” The soldier reported that he just put us next to some Palestinians that were arrested in the same demonstration. The commander, clearly upset with his young soldier, ordered that we be moved to the shade because “they are Jews.” Then he personally inspected the zip-tie handcuffs of the Palestinians, making sure that they were as excruciatingly tight as possible. This was one of my first concrete experiences in the West Bank in which I was able to see just how soldiers viewed Palestinians. It was as if they were not fully human or at least, not as human as Jews.

Purposeless is a word that is used often in the new Breaking the Silence collection of IDF soldiers’ testimonies from the past 10 years of occupation in the West Bank. Testimony after testimony tells a story of some experience where soldiers harassed, terrorized and “controlled” Palestinians for seemingly no purpose at all. Soldiers would raid a house, arrest an unwanted man or shoot unarmed civilians while forcing families to stand in the cold wearing only night cloths, for no reason whatsoever.

After telling their stories of abuse, many soldiers say they saw no purpose in conducting these actions. From an operational standpoint, there is no purpose in arresting an unwanted man or harassing a village with sound bombs at 4 AM in the morning. However, there is a greater purpose for the constant harassment of Palestinians. It is done to reinforce the notion that they are an occupied and controlled people as well as to indoctrinate young soldiers in the ways that the army understands the Palestinian population; as not completely human. Viewing Palestinians as less than human is a profound example of the moral corruption of Israeli society. 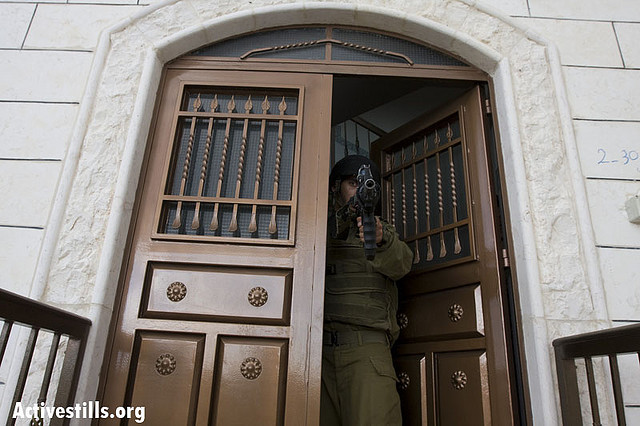 In order to occupy, with all the violations of the humanity of the occupied, the occupier must internalize a moral high ground. The “purposeless” arrests, night raids, and other violations of human rights are a necessary component for soldiers to understand their high ground.  The fact that most of the horrific crimes discussed in the testimonies were conducted by commanders and others in supervisor positions further reinforces this idea that “purposeless”operations are done for a clear purpose. Breaking the Silence has given us a window into the method of indoctrination in Israel at its most sacred level, that of the army.

One of the most recent testimonies from the book, reports of “purposeless” activities in Ramallah and Hebron in 2008-2009:

“We also had arrests that we were  tired of.  There was a feeling that they were purposeless, for example looking for people who cut the fence or people who threw stones or were  identified at demonstrations  against the fence or inciters. It was a feeling of purposelessness. If in Hebron there was a feeling that you were arresting an unfortunate person, the feeling here was that we were doing nothing. There was one arrest, I don’t remember in which village it started heating up, and there was chaos and I remember the company commander cocked his weapon and said they need to calm down, and the Shin Bet came in the middle of the village among a few houses of a large family.”

Testimony 22 evokes another picture of terror. Titled, “The battalion commander marched him barefoot”, a soldier recalls having his commander order a house raid in Gaza in 2002-3:

“We are taking everyone out of the house at four in the morning in the freezing cold and leaving them outside in the cold, in robes, without a minute of  warning to put on some clothes, and leaving them for a half hour outside until you do the search. Up to cases where they come with a Givati force in Gaza, they go in with the battalion commander; they find someone there who isn’t connected to anything, a house that’s not at the location they received, a different house. And of course in every home in Bet Lahia, outside of the house, there are pictures of Shahids. So he says to him: “What’s this?” And then he decides to take him with us and he’s barefoot. They walk three kilometers from his house to the border and he’s barefoot. He asked the battalion commander if he could put shoes on, sandals, he asked him in Hebrew and he goes to him: “No”! He started bleeding on the way.”

As I was reading this document in disbelief and sadness, I mentioned a couple of testimonies to my flat mate who was an IDF commander three years ago. I told him about one testimony which described how soldiers in Hebron would train for house arrests by selecting, at random, a Palestinian home. In the middle of the night, they would raid the house and arrest whom they pleased. After the terrorizing was over, the soldiers would release the innocent man (or men) that they captured and have an operational debriefing to inspect performance. My flat mate, rather dismissively, asked if I was surprised by this. “I used to do the same thing”, he exclaimed and continued, “They are doing the same right now somewhere out there in the West Bank.”

When soldiers, our national pride, bravely come forward and speak of what happens behind our walls and checkpoints, we have a privileged position to better analyze the national psyche. What is found is that the occupation has led to a moral corrosion of Israeli society which has almost reached a point of no return due to the fact that few in Israel will take notice of these important testimonies and the crimes in the West Bank show no sign of slowing down.

Breaking the Silence: The testimonies (part I)