Even after 11 years of struggle, the residents of Bil’in refuse to forget about the land that was taken from them. 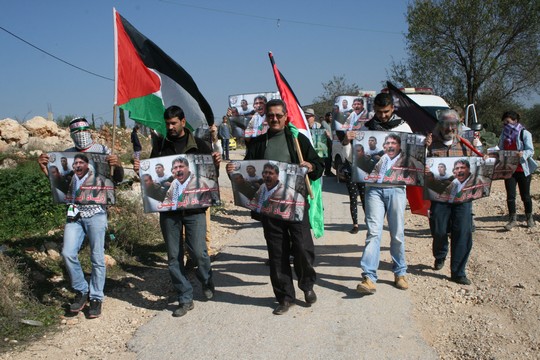 The year was 2006. The village Bil’in near Ramallah had already marked over a year of weekly protests against the separation barrier that cuts them off from their land. One day, during a hearing at the High Court of Justice over a petitioned against the route of the wall, Justice Aharon Barak wondered aloud: “Why do they protest there so often?”

Nearly 11 years have passed since the residents of this small village decided they wanted to oppose the theft of nearly 2,000 dunam of their land by the wall through unarmed, creative, popular protest alongside Israelis and internationals. Nearly 11 years, legal victories, difficult loses, a partial change in the route of the wall — and yet they are still protesting. Every week.

The goal remains the same: a struggle against the establishment of the wall on village land, and the annexation of nearly 1,000 dunam of land to the adjacent settlement. The weekly protests have undergone a change recently, following the ongoing violence across the country, and especially in the occupied territories. The Israeli soldiers no longer sit atop the new wall, which was built along the Modi’in Illit settlement bloc after the High Court ruled that the previous route needed to be changed. Now the soldiers stand where the old route used to be, far closer to the village.

The demonstrators no longer march all the way from the center of the village in colorful processions with songs and chants. Now they gather together in a small area out of the soldiers’ range. Hundreds of protesters no longer march here as they did previously. Only thirty residents, eight Israelis, four Japanese citizens and a group of Italians that came as part of an organized tour from a hostel in Ramallah, alongside a few Palestinian photojournalists.

‘A consciousness free of occupation’: Bil’in marks 10 years of struggle

Friday’s protest marked a year since the death of senior Palestinian Authority Minister Ziad Abu Ein, who died during a demonstration on International Human Rights Day after he was attacked by a soldier. The protesters in Bil’in held photos of Abu Ein, and quietly began to march toward the wall. 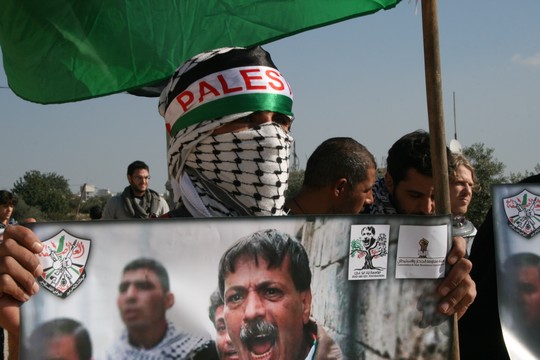 A resident of Bil’in protests with a poster of Ziad Abu Ein, who died during an unarmed demonstration last year, December 10, 2015. (photo: Haggai Matar)

It took less than a minute for the soldiers to announce that the area was declared a “closed military zone.” A minute later, the soldiers began firing large amounts of tear gas and sponge-tipped bullets, which wounded two and broke two windows of a car belonging to local photojournalist Haitham Khatib. The demonstrators retreated following the volleys of tear gas, and a number of young men began throwing rocks at the soldiers. The soldiers, in turn, ran after the youth and began shooting tear gas into the yards of the village homes.

After 10 minutes the soldiers themselves retreated, and the demonstrators returned to marching. Then more tear gas. This repeated itself until the soldiers gave up and retreated completely. Three of residents of the village and several supportive tourists went for a tour of the new wall and returned. 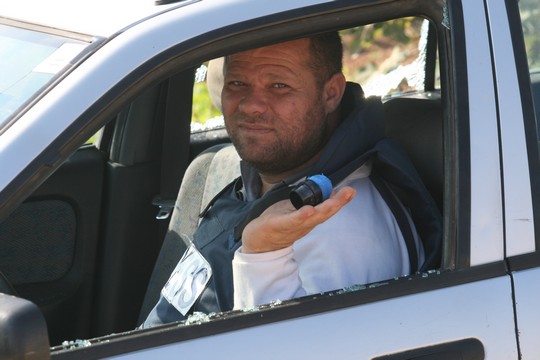 This is what the weekly protests in Bil’in look like. They are quieter than before, more minor — it has been years since the demonstrations have reached the Hebrew-language media. And yet, the residents have chosen not to remain silent in the face of the wall and settlements that were built on their land, to maintain and develop the possibility of popular struggle against the occupation.

Israelis also choose to join this popular struggle, not to give up on the connections that have been formed over the years, and to present an alternative to Israeli society: solidarity in a struggle over the future of this land, for peace, and for equality.

Meanwhile, one Palestinian was killed and 58 others were wounded in clashes on the Gaza border, according to Ma’an News Agency, which also reported that the IDF was forced to open fire after one of the demonstrators crossed into the no-go zone and attempted to destroy the security barrier. Ma’an also reported that 22 Palestinians were wounded in protests across the West Bank, including in Bethlehem, Ofer Military Prison, Silwad, and others.