The Israeli debate over the Kerry initiative has an unpleasant top-down feeling to it. 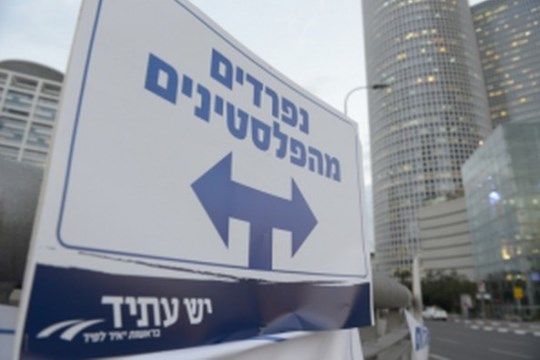 Is it only me who feels that the debate regarding a possible peace agreement with the Palestinians exists mostly among PR companies (from both sides), copywriters and graphic designers? I feel that there is zero grassroots activity and a maximum amount of billboards.

The fight between different advertisers was featured prominently on the front page of Haaretz on Wednesday, January 29th. On the upper left corner one can see the new campaign by Breaking the Impasse, under the title  “A strong state signs a deal,” which has been accompanied by its own billboard campaign. On the bottom, we have an advertisement by The Joint Headquarters, which supports coalition members who oppose a Palestinian state.

The video war is also on its way. The following is a new video released by the Joint Headquarters, which targets Likud members and Prime Minister Netanyahu. Danny Dayan, chairman of the Yesha Council (an umbrella organization of municipal councils of Jewish settlements in the West Bank), was very unhappy with this one, by the way [Hebrew].

On the other hand, leftist think tank Molad – which prepared the investigation for Channel 2 news on the regional council of the settlement of Efrat, and the way Israeli taxpayer money is channeled to Yesha Council campaigns against government policies – is promoting the video, which features the Channel 2 report [Hebrew].

Molad has a graphic/new media/PR arm called 61, which accompanies news developments with Facebook banners and graphics.

Graphically, there is no doubt that these are polished materials. The latest word in graphic design and user experience – or whatever the latest name for triggering the reader’s raw nerves is. But how long can one conduct a public debate in this manner?

One can add a somewhat artificial move by the Yesh Atid party to the ongoing billboard war: sending their Knesset members and party activists into the streets, carrying signs which read “separating for peace.”

It is all photographed too well – it rhymes and and fits the message perfectly. It is all well-financed, well-orchestrated and well-organized. Yet it tastes like plastic, and I think I know why it doesn’t seem real: because Prime Minister Benjamin Netanyahu does not communicate a real desire for change to the public. And Finance Minister Yair Lapid does not speak to his constituency at eye level on this issue. Even the screaming of Naftali Bennett doesn’t seem genuine, but rather a part of the usual game of spins.

Tal Schneider is a political reporter. This post appeared in Hebrew on Tal’s blog, the Plog, and was translated with the author’s permission.