What we can learn from the weird orders served to several leftist activists on Sunday. On police intimidation and the sham of ‘the only democracy in the Middle East.’ 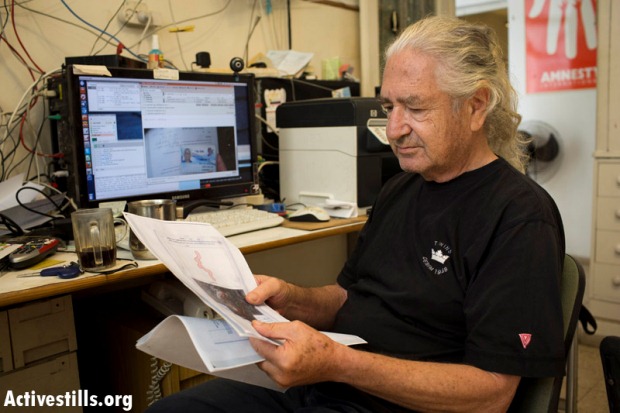 At least 11 leftist activists were surprised on Sunday morning when they were woken up by cops. The cops, all plainclothes and in groups of three, knocked on their doors between 6 and 7 in the morning, and handed them what they claimed to be administrative restraining orders, signed by the commanding general, prohibiting them from entering four villages in the occupied West Bank: Bil’in, Qaddum, Ni’lin and Nabi Saleh. Activist Alma Biblash reported that the policemen entered her apartment without a warrant, taking care to video not just her but her sister as well. The cops also waved in her face a file with her name on it. In another case, the cops woke up the parents of an activist who had moved out long ago. Activist Leehee Rothschild, also served with a warrant, was told they were issued under the 1945 Emergency Ordinances.

Commanding general? What the hell, you say? Oh. Despite Israeli propaganda claiming it is the only democracy in the Middle East, the 1945 Emergency Ordinances – defined by Menachem Begin, a noted leftist radical, as worse than Nazi legislation – are still in effect in Israel. They allow the military commander (in the case of all residents of Israel proper, that would be the Home Front Command) to do basically what he damn well pleases, or, to be more precise, to do what his ISA (AKA Shin Bet) handler damn well pleases he do. By writs signed by the Home Front Command, the settler Neryah Ofan was exiled from Pisgat Ze’ev, where he lived and worked; Tali Fahima was administratively arrested by such a writ; and the same writ enables draconian measures against John Crossman (AKA Mordechai Vanunu), even though he finished serving his prison sentence eight years ago. As part of the facade of the rule of law, the courts serve as a rubber stamp for those writs, though from time to time they sigh pathetically as they do so. The judges know full well which side the rabble will take, if it has to choose between the secret policemen and the general, or the judge.

What all of the above share in common is the fact they highly irritated the ISA. Ofan by riding in circles around the Jewish Department of the ISA and openly mocking them (they’ve been using administrative writs against him since 2005, but never took him to court); Fahima broke every Israeli taboo, crossed the lines, saw Palestinians as humans, and humiliated the ISA by refusing to serve as an agent; and Crossman, as we know, is responsible for the ISA’s worse debacle: failing to realize a nuclear technician is radicalized and about to leave the country and inform the world (insert insensible mantra) that according to foreign media reports (end insensible mantra), Israel has nuclear weapons.

But when the activists calmed down and actually read the papers they were served, they were stunned to find out this was a run of the mill closed-military-zone order, and that it was signed by the Central Command, not his colleague at Home Front. The spokesman of the SHAI police district (Judea and Samaria, i.e. the West Bank) went on to say that his people gave out 16 such writs, and that “the serving of the writs went on without incident, and at the moment we are unaware of any plans to disturb the peace as a result.” If you say so, Sherlock.

So what just happened? The most plausible explanation would be that the cops, being Israeli policemen, were clueless of the law they were supposed to enforce, and confused the closed-military-zone orders they were serving with administrative restraining orders. Attorney Michael Sfard said, in a phone interview, that Israeli courts have already ruled several times that Israeli activists cannot stand trial for violating those orders, since they are enforceable by military courts only; and, as part of the apartheid regime in the occupied territories, Israelis are not tried in military courts. A Palestinian who violated a closed-military-zone order can be dragged to court; his Israeli comrade cannot.

Sfard further said that as far as he knows, this is the first time that closed-military-zone orders – which are aimed at specific territories, not specific persons – were personally delivered. So what we have here is the policemen of the SHAI district – which is outside Israel – galloping around Israel, serving writs not written by an Israeli court but by the sovereign of the West Bank. Which, assuming Israel was not annexed to the West Bank, has absolutely no power in Israel.

This looks very much like a heavy-handed attempt at intimidating the activists: We know where you live, you’re in our sights, we have you on file, we can knock at your door at 6 a.m. Don’t piss us off and don’t try to use the fact that legally, we can’t touch you, or we’ll dig something up.

Something less plausible is that administrative restraining orders were indeed issued, that the cops were aware of them, and that they may be served soon. If that happens, we’d have the Home Front Command signing writs intended to prevent activists from disobeying orders of the Central Command – i.e., a clumsy attempt to indict people for violating closed-military-zone orders, which would only serve to remind us that we live in a military dictatorship which pretends, since such pretense is useful to it, that it is subservient to the law.

And Sfard’s final remark was even more depressing; There is a strong correlation, he says, between worsening attitude towards activists in the West Bank and military action in the Gaza Strip. The IDF uses the noise of the guns in Gaza to disguise actions in the West Bank which would normally draw critical attention.