UPDATE: Since this post was filed, the village of Al-Araqib has been demolished again – for the 9th time in a row. Reports speak of escalation in police and army violence, and information as yet unconfirmed even mentions rubber bullets fired at Israeli civilians. 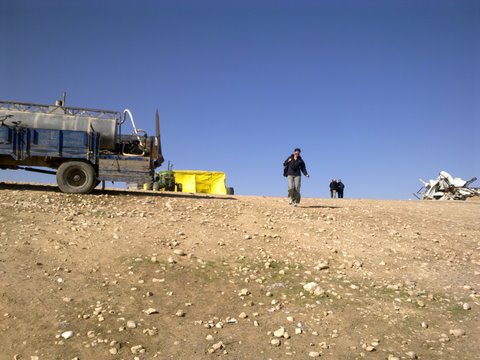 When people ask me “how are you?” these days, my first, instinctive answer is “well, there is a lot going on.” On Wednesday night, I spoke at a Hebrew University event organized by J Street U about democracy in Israel.  The discussion between myself and Professor Mota Kremnitzer (of the Israel Democracy Institute), was moderated by Mairav Zonszein – who began with a brief survey of current events related to Israeli democracy.  As her list went on and on – everything from the Parliamentary Inquiry Committee to investigate Israeli NGOs, to the recent death of Jawaher Abu Rahme in Bil’in, to Jonathan Pollak going to prison for riding his bike at a protest in Tel Aviv – I realized just how true my answer is. There has indeed been a lot going on – all of it underscored by an atmosphere of extreme tension surrounding our own work and the work of our organizations.

Eilat Maoz described it well in her article in Yediot Aharonot – when she revealed her dream that she was going to prison along with her partner Jonathan Pollak. She said that this dream can be explained away as the connection that develops between long term partners. But it can also, and perhaps more aptly , be analyzed as an expression of the permeating sense that anyone engaged in activity critical of Israeli governmental policies could find themselves in the same position as Jonathan.

Eilat hit the nail on the head for me – I have been up during the past sleepless weeks with precisely these thoughts – these McCarthyism-inspired fantasies of my own potential persecution.

And in the middle of all this, I had to take a day away and go to the Negev for a tour that I planned months ago.  Thursday morning, I tore myself out of my half-dream (I am smoking, it’s black and white, I am trying to sell a story about Bil’in to Edward R. Murrow) and piled into Hagai Elad’s car to go to Beer Sheva, where we were to pick up our colleague, ACRI human rights attorney Rawia Aburabia.

We arrive and are greeted also by political geographer Thabet Abu Raas. After a brief discussion, we head to unrecognized Negev Bedouin village of Al Araqib – one of the 37 Bedouin villages in the Negev that house 190,000 people – approximately half of the country’s Bedouin population. For every half hour that passes, the missed calls and text messages on my phone pile up (3 missed calls, 7, 12).  A lot is been going on.  Part of me is waiting for the day to end so I can get back into the noisy, busy mess of talking about democracy in Israel, defending the importance of civil society and so on.

But we arrive in Al Araqib and everything stops.  All the noise, the chatter, the strategizing.  All gone.

It is windy and sunny – we are in the Negev desert. We walk through pile after pile of demolished material – homes, cars, bicycles, fences.  This is what a village looks like after 8 demolitions since August. The colors are amazing – the white of the corrugated metal that once made the roofs of Bedouin homes, the wood from the frames, the rusty pieces of car engines and bike frames – the black plastic of broken water boilers. 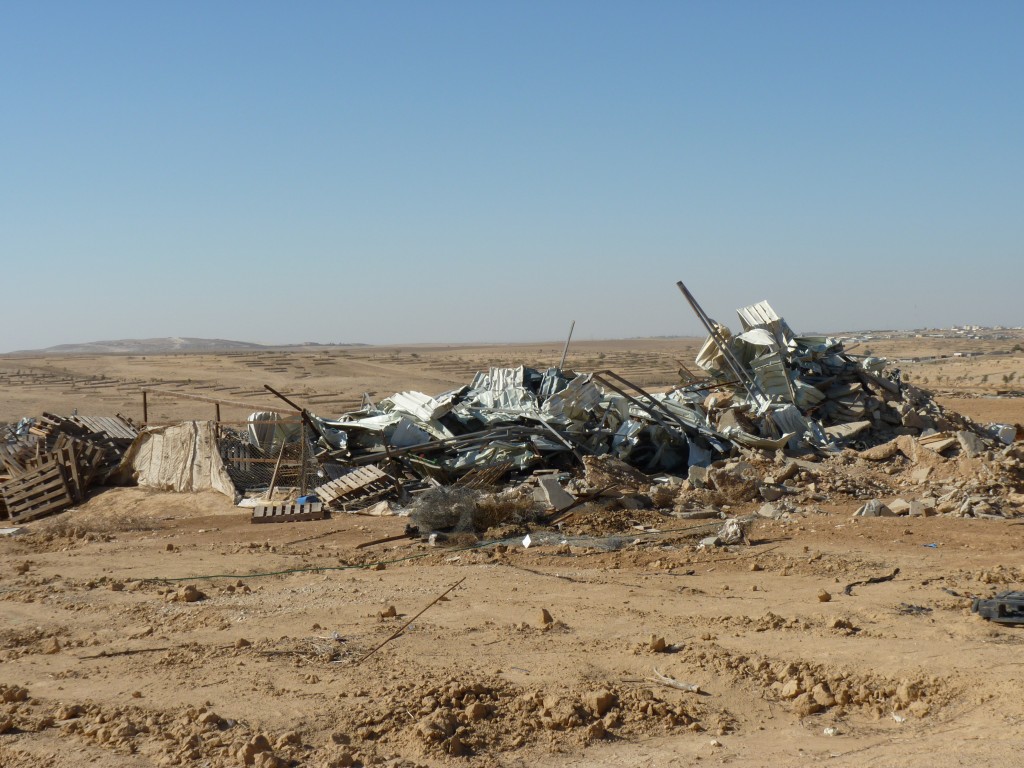 Rubble from demolition at Al-Araqib. Photo by Libby Lenkinski

Salim Abu Mdigem meets us and leads us to the only structure still standing – a simple wooden frame with a plastic tarp over it.  It is the current home of Aziz Abu Mdigem – who explains that he and his family are living in fear that even this structure will be demolished. They recently heard a rumor that Israeli bulldozers were coming back next week for a ninth demolition. I wonder why anyone would go to all this trouble just to knock over the one tent left standing.

To be clear, these people have absolutely nothing. There is no water, no electricity – there’s no structure left intact at all. And still they are under threat of demolition.  We ask them, “Why do you stay here? Why don’t you leave and go to a place with easier conditions?”  Their reasoning – that they have a historical connection to this particular land that they will forfeit if they leave – reflects the complexity of the Bedouin struggle for recognition in the Negev, described by Noam Sheizaf in his coverage of the initial demolitions of the village in August. Since 2005, the number of house demolitions each year has been escalating, with over 100 houses being demolished each year. In 2009, a total of 254 homes were destroyed and the number only rose during 2010.

Along the way, I hear on a side note all of the various ways my colleague Rawia is working on this struggle – attending joint meetings with village councils and other organizations on new legal and grassroots strategies for addressing Bedouin unrecognized villages, public awareness campaigns and more.

Over the past few weeks, I have been so heavily involved in the discussion of NGOs in Israel – the important role we play safeguarding democracy, rights and equality.  I have had a million and one conversations with people saying that the Israeli government has forgotten the value of a vibrant civil society that offers healthy and fair criticism of policies to a thriving democracy.  That limiting the space for us to operate only pushes Israeli society further away from its own democratic values. 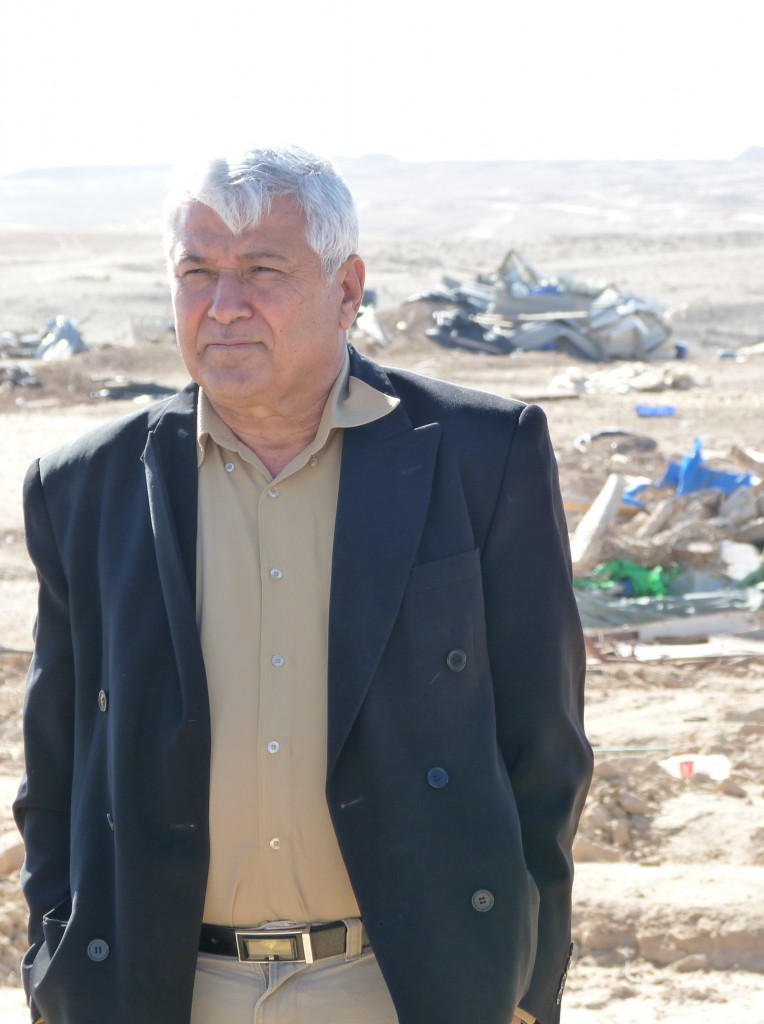 Sitting with Aziz and Salim of Al Araqib, with Rawia and Thabet – two of the leaders of the legal and grassroots struggle in the Negev, I came crashing into the reality that while I am busy fighting the rhetorical fight – an important and necessary one these days – people are waging an existential struggle for basic necessities like shelter and water – as well as national recognition and dignity.  I was so proud of the fact that while we are all banding together under the “democratic camp” banner – marching in Tel Aviv last night and utilizing the platform that has been forced upon us to speak about democracy – we are also still 100% engaged in the struggles of the various groups that we all work with, in Al Araqib and throughout the country.

Libby Lenkinski is the Director of International Relations at the Association for Civil Rights in Israel (ACRI) and a human rights activist.