Proponents of a strong democracy should welcome young citizens sounding their voices. But a prime minister who builds his campaign on fear mongering clearly feels threatened by anyone grouping together the words ‘hope,’ ‘truth’ and ‘politics.’ 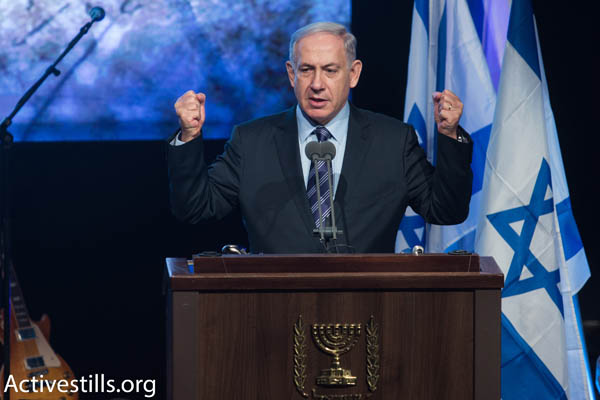 There is nothing Prime Minister Netanyahu’s Likud party finds so threatening as hope and truth. While the official campaigns of the two leading parties – the Zionist Camp and the Likud – stagger along with minimal substance, younger and vibrant progressive voices are starting to make themselves heard. The Likud recently attacked two of them, V15 and 61, and sought an injunction to shut them down until after the elections.

Likud not only accused the groups of breaking election campaign laws but resorted to their usual delegitimizaion toolbox – in this case attacking the organizations’ funding sources and hinting at a leftist cabal – which reveals that they are paying attention, and running at least a little bit scared.

V15- or” Victory in 2015” is a group of idealistic 20-somethings who are going online and door-to-door encouraging Israeli citizens not to despair over our demoralizing political culture, and to have enough hope to go out and vote on March 17. V15 claims it is not advocating that Israelis vote for any particular party, but are telling them to vote for change – which means a government not led by Netanyahu or Naftali Bennett.

The website 61 specializes in telling truth to power through biting, satirical, graphically designed montages, each skewering a particular government bluff or failure, mocking the politicians, but also bringing the background research to support its claims. 61 is the brainchild of Molad, a think tank and research institute led by a group of passionate 30-somethings, trying to bring reliable, evidence-based data and creative thinking to Israel’s political discourse and decision-making. (Full disclosure – I am the program director for Israel of the Moriah Fund, which funds Molad.)

Along with attacking Molad ,61 and V-15, Likud officials also went after One Voice, a 12-year-old movement created to rally support for the two-state solution. Likud MKs Ofir Akunis, Miri Regev, Tzippy Hotovely, Yariv Levin, and Netanyahu’s personal lawyer, David Shimron, sought injunctions against each of these organizations, ostensibly for breaking election campaign laws by having links to or indirectly campaigning for the Zionist Camp or Meretz.

On the surface these would seem to be legitimate challenges, but what gave the game away was Attorney Shimron’s charge that these organizations “have ties with the New Israel Fund.” Bashing the New Israel Fund is the pet pastime of the Israeli right, which uses it as the “bogeyman,” part of its broader strategy of trying to de-legitimize the funding sources of progressive causes and critics of the occupation. Shimron was later forced to make a public apology for linking the groups to the NIF.

For the record, the New Israel Fund raises funds from thousands of North American, European and Australian Jews, to support causes like women’s rights, Jewish pluralism, peace and democracy, equal rights for Israel’s Palestinian citizens, environmentalism, and integration of Ethiopian and Russian-speaking immigrants.

“We want to know who’s behind [these organizations] and who’s funding them,” Likud MK Tzipi Hotovely declared last week. Hotovely could go to the organizations’ websites, visit the government’s Registrars of Non-Profit Organizations or Companies in the Public Interest, or give them a call, as I did, and ask. Instead, as is her way, Hotovely preferred to invent anti-Zionist conspiracies.

What really irks the Likud is that these folks dare to expose the government’s failures and demand better leaders.

The attorney general had the wisdom to allow Likud leaders their moment of posturing for the cameras before filing their complaints deep in the junk heap where they belong. He has promised to review their motion after the elections, at which point no one will care. Perhaps he did not want this particular Pandora’s Box opened on his watch.

If the question of undue influence by foreign donors or non-party players is to be seriously raised, first up should be casino-magnate Sheldon Adelson. Adelson bankrolls a free daily newspaper, Yisrael Hayom, which serves as Netanyahu’s personal mouthpiece and cheerleader.

The attorney general would probably not be very eager to entertain motions by non-Likud parties by seeking an injunction to shut down Yisrael Hayom until after the elections, or to shutter the stable of NGOs and institutions the Right uses to promote its positions and vilify the progressive camp – Im Tirzu, NGO Monitor, the Institute for Zionist Studies, the Shalem Center, to name a few.

Proponents of a strong democracy should welcome young citizens sounding their voices in cyberspace and at the front door. But a prime minister who builds his campaign on fear mongering clearly feels threatened by anyone grouping together the words “hope,” “truth” and “politics.”

This makes it all the more urgent for Israeli voters to attend to the calls for change arising from our electorate.

Don Futterman is the program director for Israel of the Moriah Fund, a private American Foundation which supports Molad, the New Israel Fund, +972 Magazine and dozens of other NGOs working to strengthen civil society in Israel. He can be heard weekly on TLV-1’s The Promised Podcast.