The official reason for construction of the wall was Israeli security. After reviewing the history of the route in the first chapter of this series, and before inquiring whether it achieved its stated goal, we come now to the question of the wall’s effects on Palestinian society in the last decade. Chapter Two: the wall, the peace process, and Jerusalem.

I was little more than 18 years of age when rumors of the planned wall in the West Bank started spreading in activist circles around me. As its annexing route became clear, so did the need to join the very first Palestinian initiatives against it.

This is how I found myself one day, in late 2002, marching the streets of A-Ram, a Palestinian town bordering Jerusalem. The protest was aimed at plans to build a wall through the heart of town, and as local activists showed us the planned route I naively thought to myself that there must be some mistake. Looking at both sides of the streets I saw a town like any other, with houses, shops, offices and schools spread along the main road. How could a wall possibly go between them and cut the town in half? Yet I continued to march, until soldiers attacked the demonstration with extensive use of tear gas, which sent us running for cover in houses on either side of the street, and later – home.

Ten years later, an eight-meter high concrete wall splits A-Ram in two. Walking on the road by the wall, the very same road, you can now only see half the houses, the shops, the offices and schools you did before. The town, like the lives of thousands of its families, was split in two.

As we’ve seen in the previous chapter, the route of the wall was and still is a source for controversy within Israeli politics, and the debates over just how much land to grab are one of the main causes for the halting of construction. Yet the fiercest resistance to the route has always been the Palestinian one, backed by international support, and based on both the damage the route causes to Palestinian economy and society, and the deterioration of chances to form a sovereign state within pre-1967 borders. 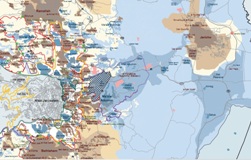 As mentioned in the previous post, the wall was planned to de-facto annex some 17 percent of the West Bank. Even the latest, more minimalist route, annexing but 8.5 percent, still takes over a considerable part of Palestinian territory, parts of it crucial for the viability of an independent state. The most radical example of this is in Mishor Adumim (Adumin Plain), where the unfinished route is liable to split the West Bank itself into two separate parts, preventing territorial continuity. As seen in the dotted purple part of the map here on the right, the route here has not received final approval, but general plans for it already exist, and the past few Israeli governments put a lot of effort into “cleansing” the area of local Bedouin communities, and promoting Jewish settlement. The nearby gap in the wall appears as if it’s just waiting for the rest of it to be built around the plains.

Soon after initial plans for the construction of the wall were made, the Israeli High Court rejected the principal petitions filed against its route, and accepted the state’s claim that it was merely a security measure, with no political implications. The court later recognized that it had been lied to by the state in some of these petitions, but did not retract its previous rulings.

The International Court of Justice, however, saw things differently. Following a request from the General Assembly of the UN, the ICJ published an advisory opinion in July 2004, stating that while Israel has a right to protect its borders, the route of the wall being built in Palestinian territories is in violation of several articles of the Forth Geneva Convention. In a vote of 14-1, justices asserted that:

Justices also called upon all UN member states to consider taking further action against Israel due to the route, but this was never done to this day. Israel itself refused to present its case to the ICJ, and to this day refuses to accept the advisory opinion.

Last Nail in the Coffin

Another major long-term influence of the wall on regional politics is the detachment of East Jerusalem from the rest of the West Bank, while “capturing” more than 200,000 Palestinian residents on the capital’s side of the wall. “The wall might be the last nail in the coffin of aspirations to make East Jerusalem the Palestinian capital,” says Sarit Michaeli, spokesperson for B’Tselem. “Of course a political agreement might somehow be reached, if anyone was even looking for it, but how would they go about it if they tried?” 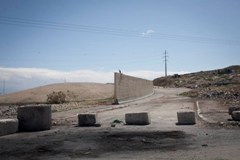 An opening in the wall in Adumim Plain (Oren Ziv / Activestills)

Aside from its political implications, one of the wall’s most devastating effects is on the very fabric of Palestinian society and economy, especially in the walled cities around Jerusalem, but also in the villages the fence runs through, and those stuck on its “Israeli side.” While the latter two will be presented in depth in the next chapter, we will now try to take a closer look at Jerusalem and its surroundings.

One of the difficulties caused by the wall is the harshening living conditions of those Palestinians who live in Greater Jerusalem, carry Israeli resident IDs yet are trapped “outside” of the wall. In Sheikh Sa’ad, for example, residents protest against a checkpoint into the city that is always closed. In Kufr Aq’eb, municipal garbage services are running thin and other basic services are also being cut or are already non-existent. B’Tselem reports that over the years, the dwindling services and growing hardships at checkpoints have pushed people out of their houses, looking for places to live within the wall, thus leading to both an increase in their cost of living, and to the tearing apart of families and friends.

The wall has also been financially devastating for Palestinian neighborhoods around Jerusalem, which up until ten years ago, flourished from their vicinity to the capital. “Dir Naballah, Abu-Dis, A-Ram, northern Bethlehem and Beit Jala – all these places have simply died out as area of commerce and transportation,” says Michaeli. “As if that wasn’t enough, being surrounded by a wall on three sides as some of these places are, of even from all sides like Al-Walaje, means a catastrophe for urban growth. There’s simply nowhere to expand the city into. This is something not necessarily felt in the beginning of the wall, but ten years later and in the long run – it presents a serious problem.”

The sealing off of Jerusalem also leads to severe limitations on access to the Muslim and Christian holy sites, to education and culture, and also to healthcare – as in order to reach the capital’s better hospitals one must get a special permit, and wait at a checkpoint to be transferred from a Palestinian ambulance to an Israeli one. The list goes on and on.

A Feeling of Nakba in the Air 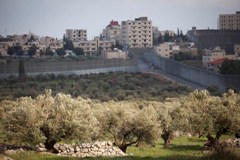 Bethlehem, and the road-enclave to Rachel’s Tomb (Oren Ziv / Activestills)

Traveling into Jerusalem from the south on route 60, most drivers probably don’t even notice the small dirt road exiting the highway to the right just before entering the city. Following this path leads you to three deserted buildings, standing in between Bethlehem and Jerusalem, and trapped on the wrong side of the wall. By their location one can only guess that these buildings used to house Palestinians from Bethlehem, barred from entering Israel, and who found themselves detached from their city, which is probably what led them to leave.

Not too far from these, one can also find an asphalt road, which once connected the birthplace of Christ to the main road, but since then construction of the wall drowns under vegetation. A small mound of earth allows a perfect view of the wall around Bethlehem, including the enclave that expands Jerusalem with one small road into Rachel’s Tomb – with high walls all around it, nearly touching the houses that were once free.

On one side of the wall there is an imprisoned population. On the other: deserted roads and houses. This view appears time and time again along the route of the wall, reminding the viewer of similar deserted areas one can still find around Israel, lying in deep ruin since 1948. Every such place tells the story of a life now banished, encircled with walls and fences, barred from return. The story of the transfer and the vacant lands is inherent to the understanding of the wall – and will be the focus of the next chapter.

Read the first chapter in the series here.