When a group of Jewish Israelis set out for the Holot ‘open prison’ in the Negev, they were hoping to sing Christmas carols to the asylum seekers. But by the time they got there, the things they saw and heard made it clear that there was nothing to sing about. 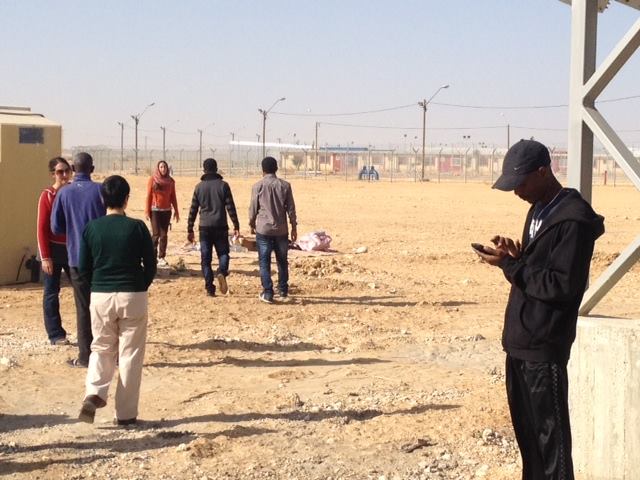 Asylum seekers and their visitors outside the Holot ‘open prison.’ (photo: Assaf Chen)

When asylum seekers from Eritrea and Sudan walked out of the Holot prison last week, they walked out of obscurity. Until then, even people like myself who had been involved in their community six years ago when they first arrived to Israel—and who, three years later, had protested against the Holot prison—had allowed them to disappear. The truth was, even though I live in the Negev, I wasn’t even sure exactly where Holot had been built.

At the same time, Christmas time was making me homesick for family and friends-who-knew-me-before-I-was-forty. I had this embarrassing impulse: I wanted to Christmas carol for the Holot prisoners. I knew that only some, Eritreans, were Christian, and that even they celebrated the Coptic Christmas on January 7th, and that anyway, neither they nor most Israelis would know the songs that I, an American Jew, had grown up on (Silent Night, Little Drummer Boy, O Holy Night…). But I felt, somehow, that it would bless them, and us, if we knocked on their door and sang these noels of love and devotion.

It was six years ago that my friend, Tsehaye showed me how if you want to reach out to people: you simply show up. Tsehaye had overheard me, a stranger then, on the telephone talking to Israeli NGOs about wanting to help African refugees, and he approached me, saying, “I am an African refugee.” Like many, Tsehaye had walked from Eritrea through Sudan and Egypt into Israel, all along risking his life, imprisonment, and paying enormous bribe money to human smugglers. He offered to take me to south Tel Aviv to meet his community. We went. After that, I visited people at the shelter once a week. It was there that I finally met the NGO workers I had been trying to connect with by telephone. But really, they were just people doing what I was doing and a lot more of it: learning what people needed, trying to help.

So it was with Tsehaye’s guidance in mind that I created an event on Facebook: “Caroling for Holot.” There was only one person I was sure would come: SH of +972 Magazine commenting fame. We had met each other commenting on the site and had been in touch for years, but until Thursday, had never met in person. After creating the event, I posted confident posts, though in truth, I suspected SH and I would be singing duets.

But Tsehaye taught me this, too: if you show up, somehow, it will be. And it was. Four others joined us. We had a mat to lay on the desert ground, a car full of food and gifts (hats, scarves, socks), and a packet full of Christmas lyrics. What more could we need?

One thing we were very curious about was this oxymoron: “open prison.” Israel calls it an “open detention center,” but it’s impossible to distinguish between Kzi’ot, the old prison the refugees call “the Palestinian Prison,” Saharonim, the other prison in which African refugees have been detained, or Holot, the new, “open” place, all three a part of one complex. In fact, prisoners refer to them interchangeably; I received a text message from a prisoner thanking us for our visit, referring to himself as “Emmanuel from Saharonim.” We were not surprised when we showed up to heavy security between ourselves and the prisoners; the gate was padlocked, the security intense, as they came out slowly, one by one.

We’d also received word that since the week before, not many prisoners remained in Holot, after the hundreds who had walked out had been punished by being put back in Saharonim.  So we were surprised to learn from the remaining 35 prisoners, all of whom seemed to join us that day that they prefer Saharonim to Holot.  Why? First of all, it’s nicer – Saharonim has televisions in the rooms and a library. Secondly, there is at least the hope of getting out of Saharonim.  From Holot (“Sands” in English)—you aren’t going anywhere. Ever. I was reminded of Solomon, an Eritrean refugee I had met in the Tel Aviv shelter so many years ago. He had told me that he’d been in a Sudanese prison for twenty years, but never had he been as depressed as he was now that he’d come to Israel. “At least then,” he told me, “I could dream of being free. Now, we are stuck. We can’t work. This is not a life.” 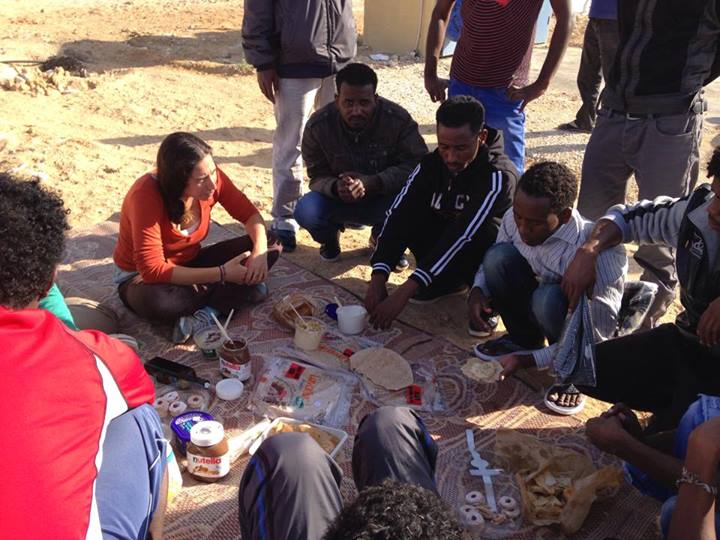 Two lawyers from Hotline for Migrant Workers who showed up to Holot at the same time as us explained it this way: “Israel calls this an ‘open center’; how can one be released from a place that is open?” Hopelessness is the strategy: if people have no hope, they might sign their own release forms to go back to their countries of origin – countries in which the human rights abuses are so bad that it is against international law to deport them. The fact that they’ve all been in Holot for one, two, or three years now with no chance of release and have chosen to stay should be proof enough for anyone who believes the Israeli government (which had the nerve to tell even The New York Times that most Africans here are economic refugees). If Israel had a refugee status determination process (for non-Jews) like every other democracy in the world, asylum seekers status could be determined objectively by the United Nations High Commissioner for Refugees. But Israel has no such policy. Really?” we asked the prisoners. “It isn’t a bit better to be in Holot, where at least you can take a walk?” But they are in the middle of the desert, not far from Nitzana Border Crossing to Egypt, adhering to three mandatory roll calls a day. There’s only one thing that makes Holot more advantageous than Saharonim, and that’s that they can leave if they have visitors. Until they put themselves back in the spotlight last week, no one had been visiting.

We actually had a great time picnicking and exchanging stories. They all speak Hebrew. I arrived in this country around the same time as them and although I’ve been embarrassed not to have learned more, I’ve never felt ashamed until I visited Holot. “It’s easier for us,” Amman told me. “Hebrew and Tigrinya are very similar.” In fact, Tigrinya comes from Ge’ez, the language in which Ethiopian torahs are scribed, in which older generations of Ethiopian Jews still pray.

Still, we had enough language between us for me to understand that their wives and children are living on the outside. “Holot is separating families, and for what?” they asked. They want to be with their children, who speak fluent Hebrew by now. They want to be learning and working. What should we bring them when we return? Toothbrushes and dictionaries, they responded.

We didn’t sing. It just didn’t feel right. When we saw them coming out, we scrambled to set up our mat, and later, once we’d all met each other, we weren’t about to break out in song. Holot is not Glee. Maybe when we go back for their Christmas on January 7th, we’ll greet them with these songs of love and devotion. Somehow I doubt it. Just to show up and connect—to make sure they know they aren’t forgotten, to keep pressure on the Israeli government to remember the values on which Israel is founded and implement a refugee policy like other developed countries—this is what we can do.

When we were ready to leave, there were still two unmatched socks that we’d brought as gifts remaining, meaning that someone must have taken a mismatched pair by mistake. But still, they were warm, new.  Really, we asked—no one wanted them?  No, they said; they didn’t match. I tried to remember if my own socks matched that day. But when all of your decencies have been taken, you hold on to what you can.

Ayla Peggy Adler lives in the Negev where she is writing a novel, Measuring Rain, about drought, sustenance, and love. She teaches scientific writing at Ben Gurion University and blogs bi-annually.