“Did I tear the screen that separated between my ordinary life and the backyard of the country I live in? I only know that what I have seen before my eyes will never disappear” 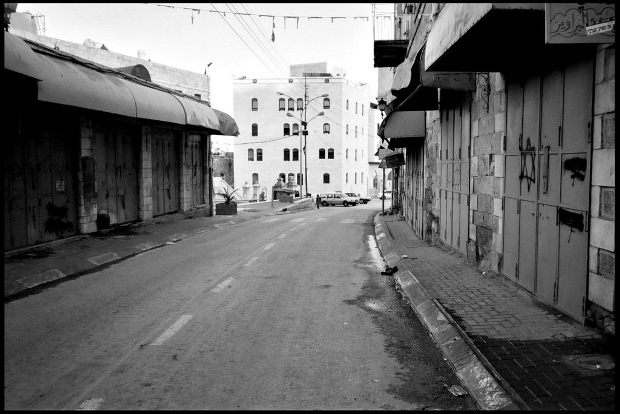 A Star of David, painted by settlers on an Arab shop in the empty Shuhada Street, Hebron (photo: scottmontreal/via flickr)

I live in a decent apartment in a popular city, or at least you can say a city that is expensive to live in. I live in the holy city. Jerusalem. I work. Not for minimum wage and not below the poverty line. I manage to float somewhere between being poor and belonging to the middle class. Ok, lets say lower middle class. Yes, this is where I’m at. Apparently. My food intake is decent. Everything is calculated, but fine. I have no complaints. I’m not lacking clothing. No brand names and nothing expensive or fancy, I don’t go out on shopping sprees every season, but my appearance is solid and aesthetic, in my opinion. I have family. I have friends. I’m not invited to parties too often, but sometimes I am and sometimes I invite. Not too much. I’m a reasonable woman.

I was always a leftist. I get it from my dad. But not only from him. I have my own opinions. I’m pretty educated. I don’t belong to academia and I’m not clueless either. I observe, I comprehend – I always voted Meretz or what came before it, like Mapam. I’m a reasonable woman.

I was always against discrimination. Not just against Arabs. Discrimination is the absence of justice and I want justice. I was always against the occupation. Immediately following the war that is being waged over 40 years now and is called the “Six-Day War,” Professor Yeshayahu Leibowitz totally convinced me. I always wanted to help the weak, or, as is politically correct to say nowadays, the weakened. A pretty positive and reasonable person, if you ask me.

Suddenly I entered the backyard. As if without knowing. Almost by chance. Cautiously, feeling it out, I joined the protestors in Sheikh Jarrah. But I didn’t get arrested there. I set out for Palestinian Jerusalem. The injustice became tangible and sharp. Painful. I visited agricultural areas in the West Bank, out there where the occupation hides out. Wonderful camouflage colors of tiled roofs and greened gardens in well-kept areas, with good road systems, clear signs with the names of the settlements; the Palestinians, concealed behind walls in their thousands, prevented from movement by checkpoints and blockades. There I listened to Naim, who described his life, the life of his family, in a low voice. He was choked up by tears but fought them back. Not me. I cried.

Then I got to Hebron. Hebron, the largest city in the West Bank  – there the occupation stares you in the face.There it is out in the open, clear as daylight. A Palestinian city once teeming with life and now the houses and markets are deserted and desolate. A ghost town. Hundreds of settlers expecting the city of the patriarchs to come back to life, between the concrete blockades, the soldiers, border police, the cruelty and the hatred that is impossible to grasp.

And Bilin. Bilin whose lands are being stolen for the sake of the orthodox settlement of Modiin Ilit, a settlement that is partly constructed on private Palestinian land, laundered after the fact. There, illegal construction is not bulldozed. There, the court launders construction. There, Jawar Abu Rahme was killed in a non-violent protest the IDF doles out lies. Finally, the most impoverished villages in the South Hebron Hills…the settlers, the army, the civil administration and the police engage in severe oppression. They destroy water cisterns, kick out the shepherds, destroy tents and tin shacks and classrooms, they physically assault, steal land and even kill. Every time Palestinians move violent settlers show up. The army shows up, waving its “closed military zone” order and that’s it. End of story. No water, no herding, no harvesting, no land…no life.

Did I tear the screen that partitioned my ordinary life from the backyard of the country I live in? Could it be that the screen was already collapsing anyway and I couldn’t avoid marching into what was taking place just beyond it? All I know is, what I have uncovered can never be concealed again. In the backyard of the country in which I live, harsh things are happening every day. In this backyard massive amounts of people live in poverty, fear, under cruel oppression. Sorry for the superlatives. But reality is much worse than these empty superlatives.

In the backyard, the sovereign is the settlers, and the reasonable people, who are still reasonable and hold different political opinions across the spectrum, have surrendered to the settlers. The settlements are taking over the country and the government is scared. Scared of settlers, scared of Lieberman, scared of tycoons, from which it draws its power. The government is scared its stability will be challenged. It exists as long as there is someone to maintain it. It must preserve the status quo – not to make decisions, not to take actions, lest its stability may be challenged. Lest it may end.

This letter was sent by its author, who wishes to remain anonymous, to Sheikh Jarrah activists. The original Hebrew version appeared on Solidarity Sheikh Jarrah’s website. Translation by Mairav Zonszein.