Scores of racist commenters rejoice at the sight of a news item about the tragic death of four young girls in the Hebron area. So why doesn’t anyone do anything about it?

This past Thursday, Israel’s Channel 2 News posted on a news item on its Facebook page about a tragedy in Hebron: four Palestinians girls had died after they were forgotten in a car (actually, the girls accidentally locked themselves while playing, and this did not happen in Hebron but in a nearby town, Taqumiya).

Scores of Israelis responded with appalling comments. Here’s a small yet unpalatable selection:

“Why only 4, I would have preferred 8” said Naty Asulin; “I am going to unlike your page. Why is this a tragedy? They are not from my people” (Shalom Dror); “The more the merrier. Why does this not happen more often?” (David Hagege); “Could they not have forgotten 5 more?” (Avial Abutbul).

This goes on and on.

Posting revolting comments online is of course nothing new, and by no means is the practice limited to Israelis. Racism and hate speech transcends all cultures. What is noteworthy – and perhaps as troubling as the comments themselves – is the willingness of the people making them to identify by their real name. Posting anonymously online at least reflects (if not outright shame) a fear of retribution and an awareness that such comments are not acceptable by most, and would not be tolerated in real life. It seems that this however is no longer the case – in Israel hatred against Palestinians has gone mainstream, its perpetrators no longer feels a need to hide. 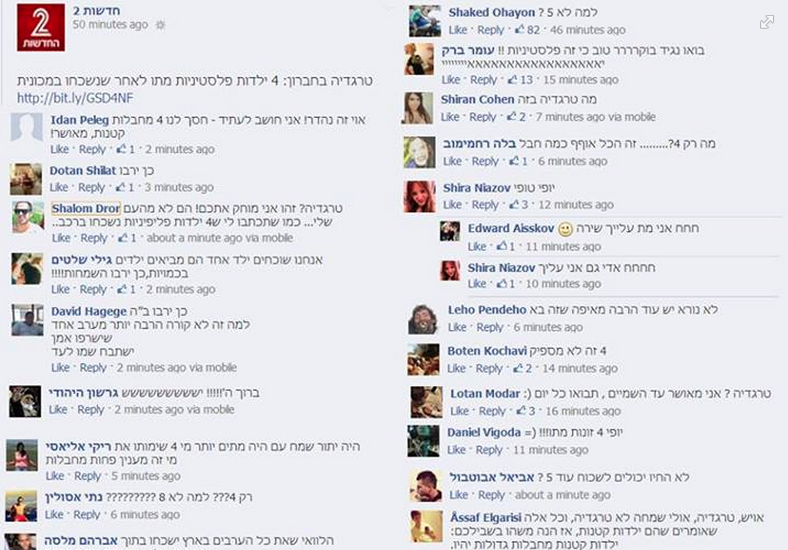 The original Channel 2 post and the comments were shared by an online activist who goes by the name ‘John Brown’. One sharp-eyed observer on Brown’s Facebook page pointed to a comment by Havazelet Ben Shlosh who wrote “what’s tragic about this story? Jubilation.” This is in line with the many other comments posted in response to the story, except that Havazelet works at a children’s events and entertainment company – ‘Child Star Moshiko-liko.” I rang Moshiko to ask him if he was aware of the comments made by Havazelet: “I am very angry at these comments. I do not distinguish between children of any nationality or religion. I spoke to Havazelet and made it clear she is not to post such things again. I find them extremely unacceptable.” He does not plan to dismiss her at this time.

Hate speech is illegal in this country, so one might expect Israeli police to display the same level of activism it did when arresting Palestinian-Israeli Razi Nabulsi for (alleged) posts he made on his Facebook page.

I wouldn’t hold my breath though.

Tomer Zeigerman is a PhD candidate in Political Theory at the New School for Social Research and is currently residing in Israel.