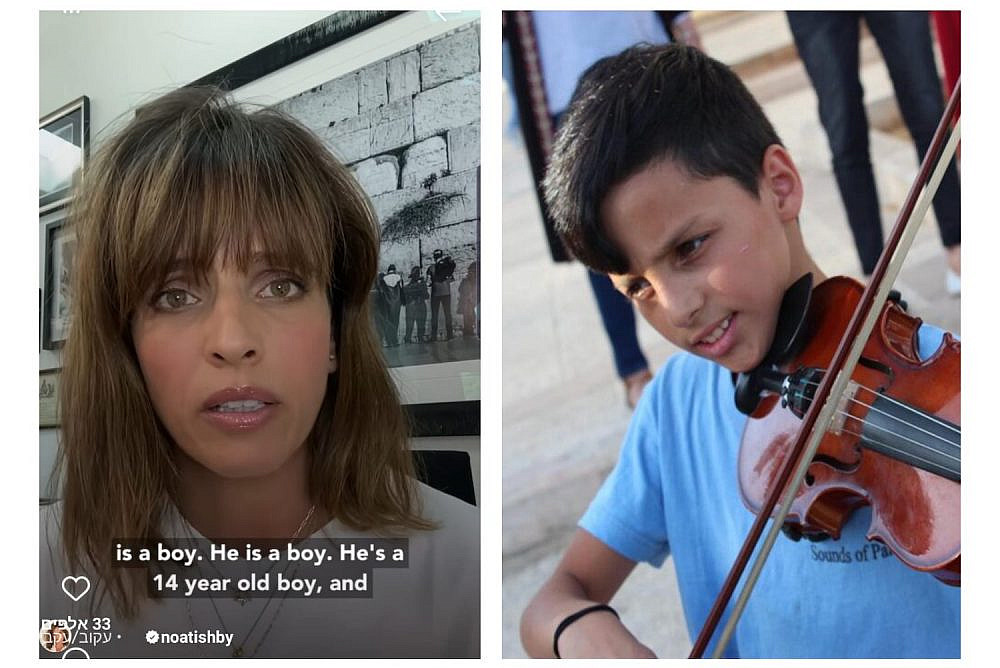 Are Israeli security authorities handing over investigation materials to online hasbara stars in order to score points on social media? It certainly seems so.

Last Friday, Israeli actress Noa Tishby, who this month was appointed Israel’s first-ever special envoy for combating antisemitism and the delegitimization of Israel, released a video on her personal Instagram account in response to a post by Palestinian-American supermodel Bella Hadid. Hadid had shared a story about Athal al-Azzeh, a 14-year-old Palestinian boy who was arrested two weeks ago by the Israeli army, who accused him of throwing stones — a charge Athal has adamantly denied.

In her response video, Tishby featured two photos of a masked Palestinian rolling a tire, which appear to have been part of the Israeli military’s investigation file on Athal — a fact corroborated by his mother, Jinan, who says she was shown the photos by Israeli interrogators several days before Tishby’s post. The investigation file, which is not public, was most likely handed over to Tishby by the authorities.

Athal was arrested on April 15 near Checkpoint 300 in Bethlehem in the occupied West Bank, as he was walking toward his grandmother’s home in Aida Refugee Camp, which is near to the separation wall. There was no protest at the site, but a few teenagers nearby had been throwing stones at the separation barrier as he walked by. 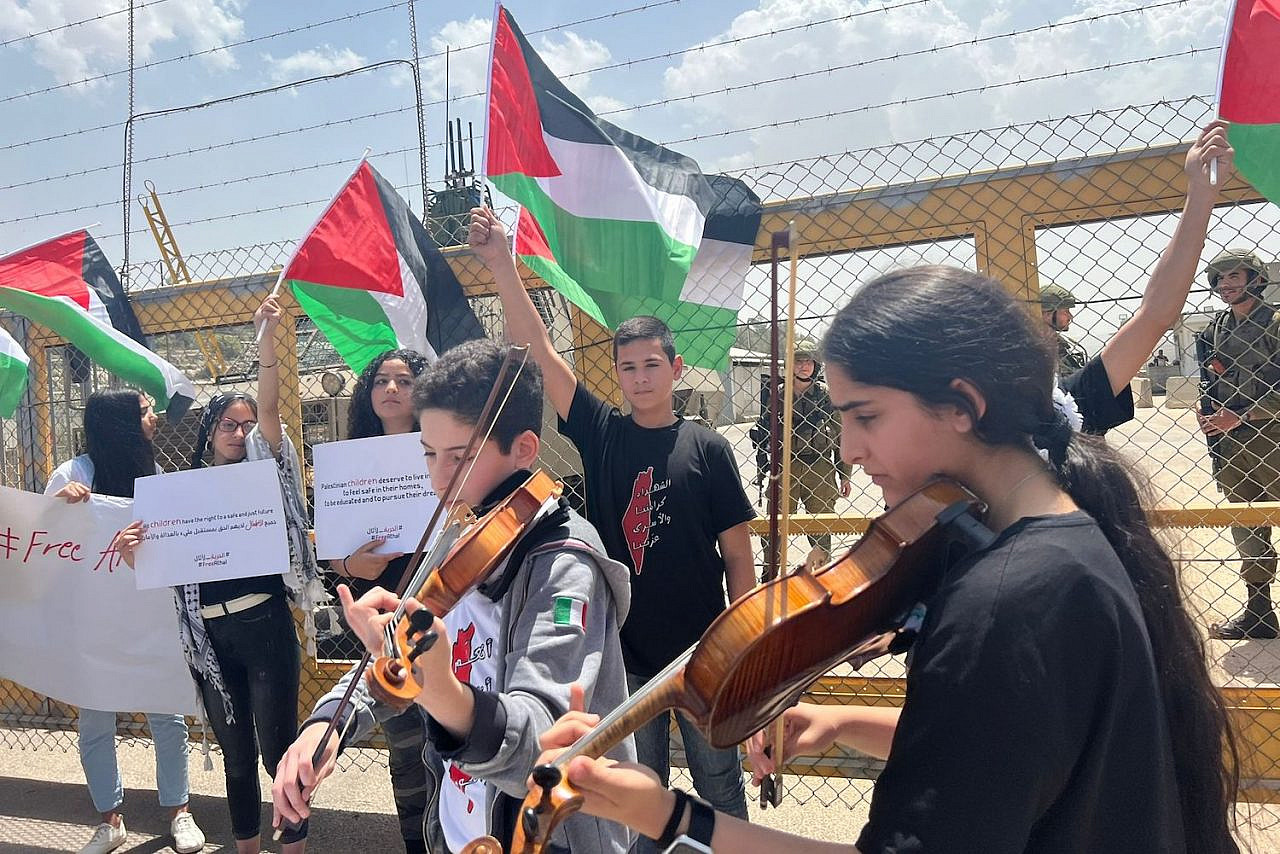 “He was in the wrong place at the wrong time,” Athal’s father, Ahmad, who works as an attorney, told +972. According to him, it was a few hours before the family finally received word from the Palestinian District Coordination and Liason Office (DCO) that their son had been arrested, after which they received a phone call from an Israeli military investigator.

“We were happy he was alive, that at least they didn’t kill him, especially at a time when we constantly hear about shooting teenagers,” said Ahmad.

Athal’s arrest garnered international attention after Bella Hadid shared a post about the case by left-wing Israeli activist Yahav Erez, which received over 16,000 likes. Erez’s post, which featured a photo of al-Azzeh playing the violin and sought to put pressure on the Israeli authorities to release him, stated that Athal was “being held hostage by Apartheid Israel.”

In response, Tishby — a longtime Israel advocate whose new envoy position falls under the Foreign Ministry — took to Instagram claiming that Hadid was “spreading antisemitism” by sharing Erez’s post.

“That’s not true,” Tishby told her followers. “He was not kidnapped nor is he being held hostage. He was arraigned on the 16th [April], saw a judge twice, and has a release date on the 24th. Athal was arrested for throwing rocks and burning tires, which is something he would have been arrested for in the United States or in any other law-abiding country in the world.”

Hi @bellahadid, it’s me again. I am here to correct you. Again. I’m going to say to you again: Bella please stop lying and demonizing Israel. But I know you won’t, so I guess I’ll see you soon.

By sharing the post, Tishby continued, Hadid was “spreading hate and misinformation, which is demonizing the Jewish state and flaming — yes, Bella — it’s flaming antisemitism,” adding that Athal should “focus more on his violin rather than on violence against Jews.”

Tishby’s video included photos of masked Palestinians which appear to have been taken by Israeli security cameras posted along the separation barrier, presumably during confrontations with Israeli forces. Jinan, Athal’s mother, said that Israeli interrogators had shown her, among other materials, the two photos seen in Tishby’s story after she was brought into the Atarot police station last Wednesday — several days before Tishby released her video.

“I saw the photos that went up on Instagram,” she recalled. “These were the exact same photos [they showed me]. They showed me the two images and wanted me to say it was my son, but I told them that it wasn’t. They called me a liar.”

Since his arrest, Athal has had four hearings at Ofer Military Court, one of which took place last Tuesday. He has been charged with stone throwing and setting fire to tires. “My son did nothing and denied all the accusations against him,” Jinan said. “They continued to pressure him in the investigation by using psychological tactics in order to force him to confess.”

Ahmad said that when he met his son at Ofer, Athal had told him that the interrogators threatened to keep him in prison “forever,” yet Athal refuses to admit to the allegations. “It annoys them,” Ahmad added. “I am a lawyer myself, and very often we spoke at home about the law. He knows this.” Athal also told his parents that should he refuse to confess, they too would be brought in for interrogation. The authorities made good on their promise and called in Jinan last week.

Violating the right to a free trial

Unsurprisingly, and despite Tishby’s claims, Athal was not released on April 24, but rather was brought in for a hearing at Ofer, where his remand was extended.

“I saw [Tishby’s] post. I hoped it was real and that he would be released, but unfortunately he wasn’t,” Ahmad said. “I don’t have any hope, but who knows. I want to continue to believe that maybe God will help and the judge will order [Athal] released.”

Ahmad himself posted two comments on Tishby’s Instagram video before and after Tishby’s claimed release date. Among other remarks, he wrote (edited for clarity): “You allow yourself to be unprofessional and to be a speaker for the Israeli intelligence. You are spreading lies about an innocent 14-year-old boy.” When April 24 passed, he posted another response: “Athal was tortured by your army, and the mother of Athal was taken through a hell of interrogation pressuring her to convict her son — any answers from you on that? While you are enjoying tanning on the beach, we Palestinians are being tortured by your government.”

At a hearing held Tuesday in Ofer Military Court, Judge Noam Breiman ordered Athal be released on NIS 4,000 bail, as well as third-party bail of NIS 5,000. Legal proceedings will continue and Athal is likely to be indicted at the end of May.

The judge ruled that the stone throwing taking place as Athal walked by was not directed at Israeli soldiers but rather at a guard tower, and that due to its physical size it is doubtful whether the stones could have caused any significant damage. 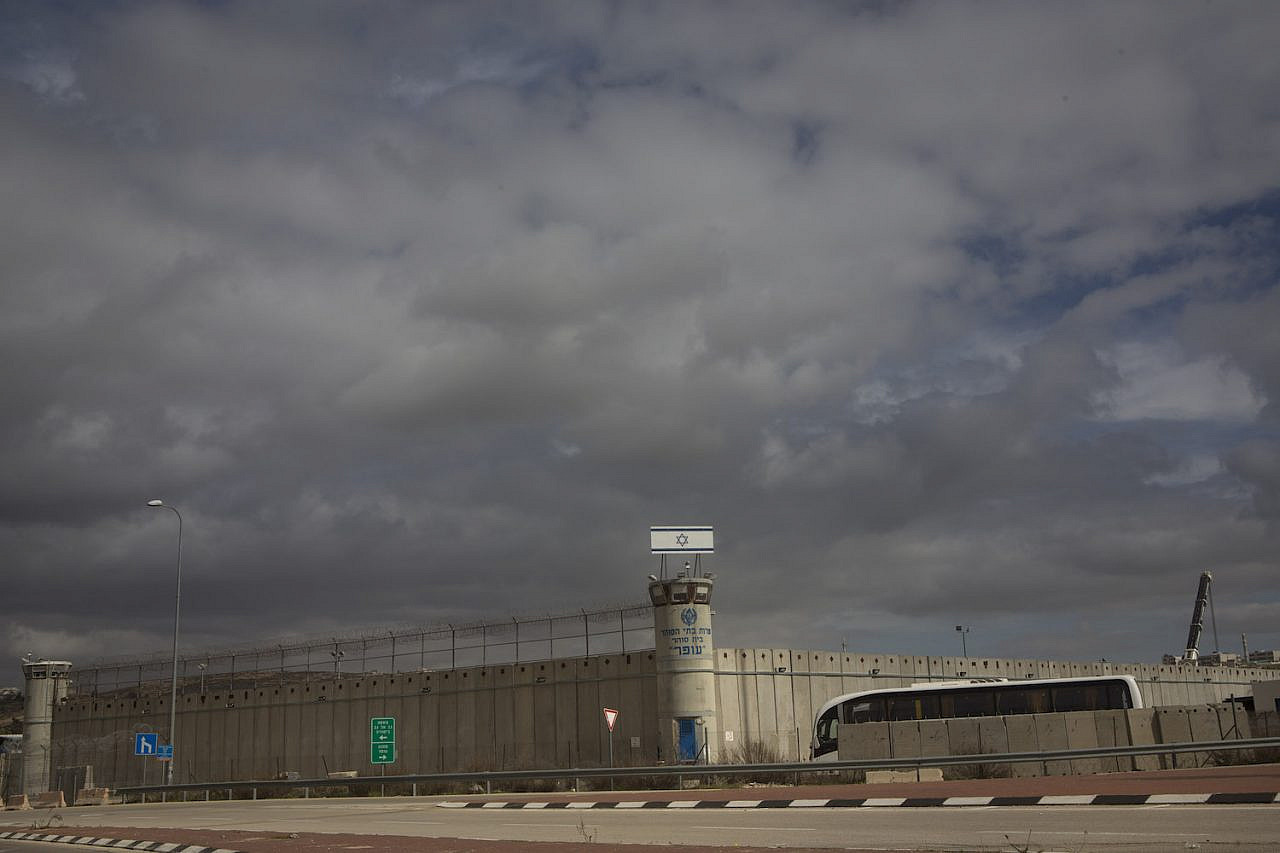 Just this week, Haaretz reported that, according to army figures from between 2018 and April 2021, 96 percent of convictions in Israeli military courts ended in conviction, and 99.6 percent of those convictions were obtained through a plea bargain. This dominant trend is evident in Athal’s case, as with the army and the military court system apparently trying to pressure him to confess to the charges during interrogations, paving the road for a plea deal.

Riham Nassra, an attorney who represents Palestinian detainees in military courts, said that publishing investigative materials before an indictment is issued, as Tishby did, is illegal, and indicates that the materials had in fact been leaked. “Even if those materials were somehow presented at the court hearing, it was illegal for them to be released — this violates the right to a fair trial, especially when it comes to a minor whose hearing is held behind closed doors and may also disrupt or harm the investigation.”

The Israeli Foreign Ministry, which oversees Tishby’s position as Special Envoy for Combatting Antisemitism, stated: “Noa Tishby’s video was published in response to a deceitful video that was posted on social media with deliberately false information regarding the arrest of a young Palestinian, in order to tarnish Israel’s image and delegitimize its actions. In coordination with various bodies, we conducted an examination of the facts that formed the basis for Noa Tishby’s response. The published photos do not reveal the detainee’s face and therefore there is no impediment to their publication.” Notably, the Foreign Ministry did not explicitly deny that they had handed over the materials for Tishby to publish.

The IDF Spokesperson offered the following response: “Athal al-Azzeh was arrested on April 15, 2022 after participating in a riot during which he set fire to tires and threw stones at a military guard post. On April 26, 2022, an indictment was filed against him.”