We often quip that being a Palestinian is a crime. Judging by the hundreds of Palestinians who are in administrative detention — detained without charge or trial — that statement is not too far off. 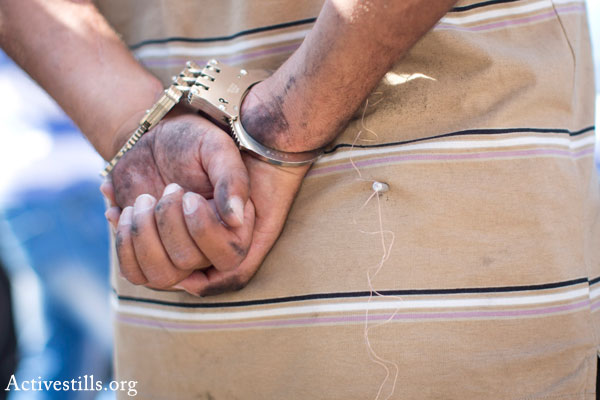 Illustrative photo of a man being arrested after police used a tazer (Activestills.org)

Take two recent incidents as prime examples: a Palestinian driver collides with a crowd of people getting off a train, killing a child. He is killed on the spot and the authorities immediately announced that he has a record of “security related offenses.” I don’t know if he did it on purpose or not, but after the collision, his exited his vehicle and ran. Why wasn’t he arrested? Why was he not given the chance to defend himself? Could he not just have been driving recklessly? Instead, he was shot and killed.

The other incident occurred in the Palestinian village of Sinjil, where an Israeli settler ran over two girls walking along the side of the road, killing a five-year-old girl. Was this an accident? Possibly. Will there be an open investigation? Very unlikely. And most importantly, the driver wasn’t gunned down as a terrorist moments after the incident.

And this isn’t a one-off. Whenever a Palestinian is suspected of killing an Israeli, he is convicted, jailed or killed without what would be called “concrete evidence”in a democratic nation, or even a semblance of a real, fair or open trial.

And it doesn’t usually just end there. Now the family that has lost a husband and a father, for an event for which he may or may not be responsible, but in which the family played no part, has their home destroyed. Then the man’s close relatives who obviously played no part in the event  — otherwise they they would have met with his same fate  — get nasty little marks put onto their secret police files, making it very difficult for them to get permits to enter Israel or even travel abroad. (Generally speaking, when a Palestinian is killed by Israeli forces, their close relatives’ entry permits are revoked out of fear that they will seek revenge.)

So one Palestinian allegedly (judging by the way Israeli news articles are written, “allegedly” is a word that doesn’t exist in the Hebrew language) commits a crime, and several dozen people pay the consequences potentially for years to come.

This is the same justice system that allows for the detention of hundreds of Palestinian children every year. And while my hypothetical example was of the act of killing, you don’t really have to have committed any crime to end up on the wrong side of an Israeli detention facility. Any public political expression by a Palestinian, for example, is a crime. A Palestinian taking his sheep to pasture too close to a settlement is a crime. A Palestinian defending himself from a settler attack is committing a crime. In the Jordan Valley, where water is scarce, collecting water from an overflowing pump, is a crime.

We often quip that being a Palestinian is a crime. Judging by the hundreds of Palestinians who are in administrative detention — detained without charge or trial — that statement is not too far off. 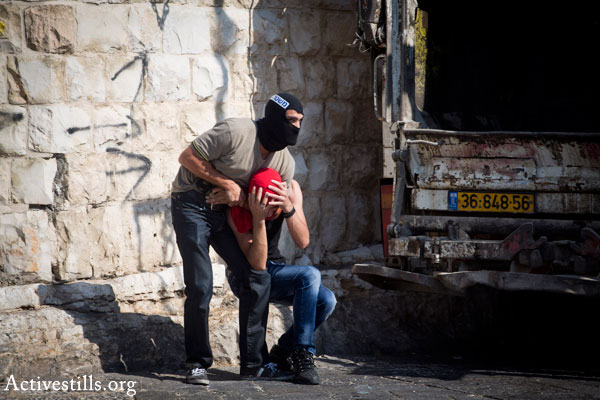 Hundreds of meters away, behind their fences, live the settlers.

Case in point, the self-confessed killers of Mohammed Abu Khdeir, the Palestinian boy they doused in gasoline before burning alive. The team of killers includes one adult and two minors. And whereas Palestinian minors are detained with adults for merely throwing stones, these murderers continue to be treated as minors.

There are Israeli settlers who routinely attack Palestinians as the latter pick their olives. There are settlers in Hebron’s Tel Rumeida neighborhood who are constantly harassing their Palestinian neighbors. Israeli human rights organizations supply Palestinians with video cameras, so there is actual footage of these attacks, but that has lead to almost no convictions. Thomas Hobbes wrote in 1651 that in the absence of law, the resulting human nature is terrifyingly chaotic, and nowhere is that clearer than among the settlers of the West Bank, who act without fear of ramifications.

What I am trying to say here is that the double standards are frustrating. Yes, I realize that we live under occupation, and under occupation you can’t really ask for justice. But the result is a frustrated populace that due to ongoing restrictions feels increasingly that they have nothing to lose. I’m not saying that when a Palestinian kills an Israeli that they should be let off the hook. What I am saying is treat them the same way you would treat an Israeli who kills a Palestinian.

President Reuven Rivlin says it’s time to admit Israel is a sick society in need of treatment. But that’s not going to happen in the absence of rule of law, and more importantly, justice. As long as a double standard exists whereby rabbis like Dov Lior can spew hate speech with no recourse. As long as the Israeli army comes to the aid of or turns a blind eye to settlers attacking Palestinian’s, as long as Palestinians are killed rather than arrested, the “treatment” President Rivlin seeks isn’t going to come.