The past two Israeli governments successfully turned the issue of African asylum seekers into a threat posed by infiltrators, who were subsequently criminalized. A short examination of the country’s history with infiltrators, however, can give us some important insights. 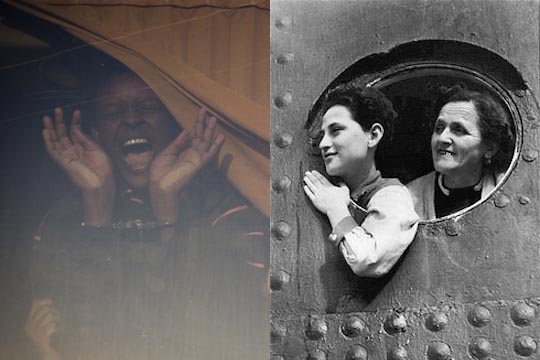 African asylum seekers are arrested and put onto a bus in Israel, where authorities have not granted them refugee status in 2013, Jewish asylum seekers in the port of Havana where they were denied asylum in 1939. (Photos: Activestills, U.S. Government)

Interior Minister Gideon Sa’ar, who’s in favor of expelling refugees from Africa, devised a catchy slogan – “A country of all its infiltrators” – in order to condemn those who defend asylum seekers in Israel. By using that concept he is trying to show the absurdity of those who support giving refugees asylum and rights – because nobody wants us to become a country of infiltrators. An historical examination of those who previously knocked at the gates of this the country, however, can give us some important and surprising insights.

Some of them were Jews who managed to flee and infiltrate across the borders of countries under a Nazi regime or Nazi occupation in order to reach this country and after an agonizing journey, become legal citizens.

The next infiltrators Israel received, not necessarily welcomingly, were Jews from Arab states who slipped through their countries’ borders after Zionism brought the pot of nationalism to a boil. Hundreds of thousands of Arab Jews found refuge in Israel and became its citizens.

Not all Israeli Jews at the time wanted to prevent the refugees’ return. In 1956, Rabbi Binyamin, one of the founders of Brit Shalom, issued a compassionate plea: “To our infiltrating brother… From now on, don’t call him an infiltrator; call him an illegal immigrant, because you unknowingly bore redemption in your own illegal immigration. You are not hated, not an enemy, not a foe, but a brother and comrade. Thus shall you be treated: we shall rehabilitate you among us, as one of us, among your people, wherever you choose.” If only we could believe it.

The 1954 Prevention of Infiltration Law created the legal framework to prevent the return of Palestinian refugees. It was updated a week ago in order to criminalize the African refugees in Israel today. This law daringly leaped across and bridged decades to reflect the state’s consistent approach to the non-Jewish infiltrator. The law that made Palestinian infiltrators threatening and dangerous has also transformed African refugees into criminals.

The tone of Sa’ar’s slogan recalls  – perhaps intentionally – “a country of all its citizens,” the phrase by former Balad party chairman Azmi Bishara, who aimed to advance civil equality and challenge the Jewish character of the state. It’s as if Sa’ar is saying he’ll have “neither a country of all its infiltrators nor of all its citizens.” Sa’ar isn’t opposed to Israel taking in infiltrators, but he wants to filter them, to sort them into Jews and non-Jews, according to his Zionist ideology. The Jews should be accepted and the non-Jews should be left on the outside. It doesn’t matter whether they are natives of this land or refugees from wars in Africa.

Had we been true to the legacy of Rabbi Binyamin and accepted both the Jews and non-Jews, we would have been able build something better, even if were to fall short of full redemption.