Your favorite pastime is a part of the occupation. 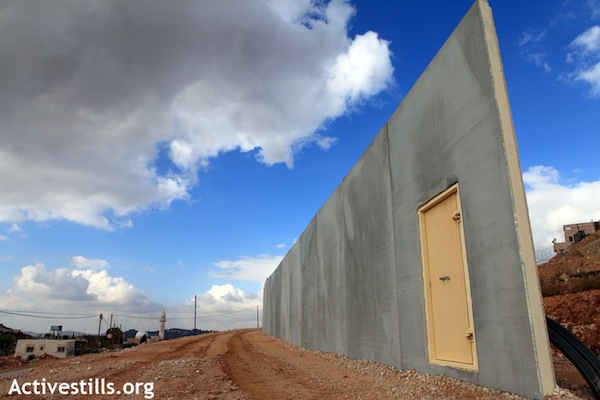 A partly constructed portion of Israel’s separation wall, in Walaja, December 7, 2010. Israel is a de-facto one-state, with different rights to the non-Jewish minority population under its control (Anne Paq/Activestills.org)

Arguably the most popular political debate on Israel/Palestine is the one taking place between supporters of the two-state solution and those who support a one-state idea. A piece by Professor Ian Lustick in the New York Times won a lot of attention recently, and it’s not surprising: from our own modest experience here at +972 Magazine, I can state that we have noticed long ago that pieces based on the idea that “the two-state solution is dead/not dead” or “the one-state solution is possible/impossible” win a lot of attention and get many comments.

However, my own feeling these days – which is also based on my own contributions to this debate – is that this is a false question, a waste of time and political energy, which currently serves to prevent any form of a just and peaceful solution.

The whole line of thinking on “the death” of the two-state solution is a bizarre abstraction. How can one determine when an idea has become impossible to implement? What makes a certain threshold – say, number of settlers – an absolute tipping point, beyond which it is impossible to divide the land into two?

In real life, the probability of an idea being implemented is a question of political circumstances and political power. Under certain political circumstances, it is impossible to evacuate a handful of settlers, while under others, we can imagine not 100,000 (which has become the new “possible” threshold in recent years) but one million leaving their homes – the way the French settlers left Algeria after one-and-a-half centuries there.

Therefore, it is not surprising that “the death of the two-state solution” argument appears as a sort of political Fata Morgana – it is always a few steps ahead of us, yet we never seem to get there. But if we haven’t yet arrived at the “death of the two-state solution moment” when the 500,000th Israeli Jew is moved east of the Green Line, or when the Palestinian Authority is broken into two entities, I suppose we are able to continue speaking about this moment for many more years.

More importantly, the conversation vis-a-vis both solutions is meaningless, as these two labels – “one state” and “two states” – only seem final and coherent in nature. In reality, however, the people using them hold extremely varied interpretations. The two-state solution proposed by Benjamin Netanyahu is very different – in every aspect – than the two states described by the Geneva Initiative or the two-state solution that some Palestinians consider. Again, the two-state solution will never die because we can always reinvent the notion of what a Palestinian state is.

The entire conversation over “the coming death of the two-state solution,” phrased in future terms, serves a single purpose – to prevent a fact-based discussion on what we have had for a very long time now: a single, united regime on the entire land between the Mediterranean Sea and the Jordan River, where roughly half of the population (Jews) have full rights, while non-Jews are allocated more limited legal rights, according to a complicated mechanism of citizenship and residency (some have almost as many rights as Jews, while some have close to none). This is not an abstraction nor a judgment – it is the political reality. Yet describing reality this way carries very serious moral and political implications, which many people and organizations have a serious problem with. Thus, they prefer to deal with imaginary abstractions – talking about what could or couldn’t be rather than what is.

> Click here for +972’s special coverage of the diplomatic process

Things are not less abstract when people discuss the one-state solution (though supporters of this idea are less inclined to delude themselves about the current state of affairs). My general impression is that when the Israeli Right speaks about the one-state solution it is referring to a Jewish state, not unlike Israel today, with a larger Palestinian minority. Furthermore, when most Palestinians speak of a one-state solution, they imagine a Palestinian state with many Jews. As any visitor to the country might have noticed, both societies are extremely nationalistic – you only find consistent post-nationalism in intellectual and elite circles, which is kind of expected.

My feeling is that people argue about solutions because it is (a) easy; (b) fun, especially for intellectuals; and (c) helps them avoid tough political choices. For example, Israeli supporters of the two-state solution tend to see their country as a democracy which will cease to remain at the moment (which never comes) the two-state solution is no longer possible. You won’t ever get a J Street or Peace Now statement saying “Israel is not a democracy, but it could become one if it evacuates the Palestinian territories,” even though such a statement is just as correct (and in my opinion more so) – than one which states that Israel is a democracy, but one day could cease to be so. For one-staters, the debate is a useful distraction from having to deal with real on-the-ground trends in both societies that seem all-the-more consumed by the project of securing their very nationalistic models.

So please, no more one-state vs. two states. An honest approach to politics, I believe, must begin with a real evaluation of the current reality on the ground (de facto one state, albeit not a very democratic one), and the creation of political force for change. Since every person and party speaks of a different solution anyway (even when they use the same labels), we should only scrutinize actual plans set forth by the political parties. In other words, both communities on the ground will need to evaluate and approve real agreements when they are reached.

Related:
One or two states? The status quo is Israel’s rational choice
The peace industry’s slippery slope
Oslo years, a view from the ground