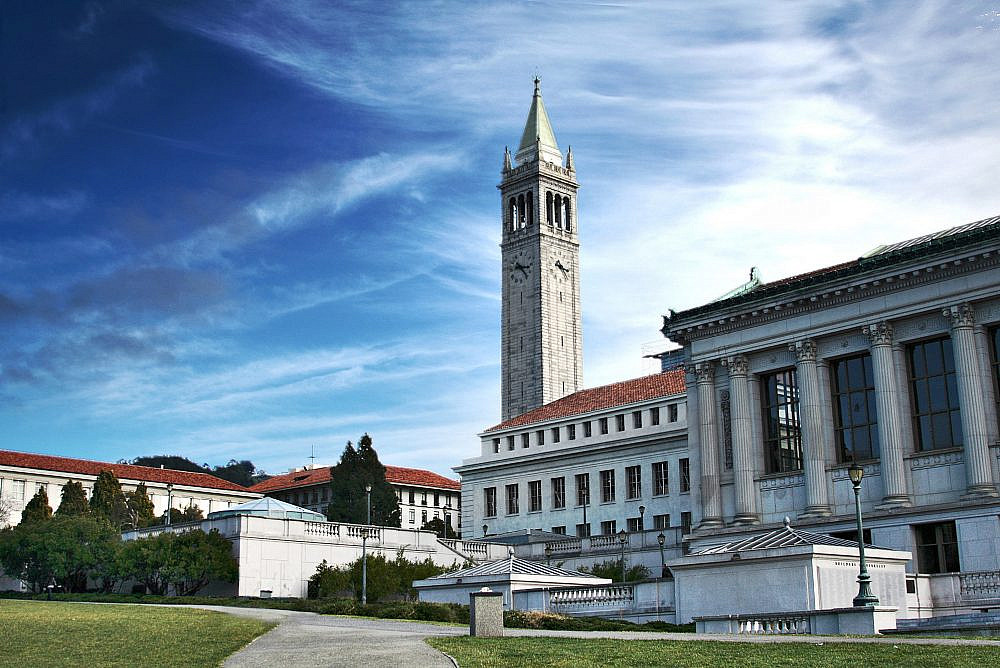 Controversy erupted at UC Berkeley Law School in recent weeks as students, administrators, and unaffiliated activists debated the relationship between antisemitism and anti-Zionism. At the end of August, Law Students for Justice in Palestine (LSJP), a student group at Berkeley Law, initiated a campaign urging other groups at the law school to adopt an anti-Zionist pledge in their bylaws. These organizing efforts provoked fierce backlash, above all regarding the provision calling on groups not to invite pro-Israel speakers.

The university administration was quick to respond to the pledge, which was adopted by eight other groups alongside LSJP. The dean of the law school, Erwin Chemerinsky, wrote to the leaders of all student groups to express his concern: he warned of a threat to “freedom of expression,” while also noting that “singling out the state of Israel for special condemnation, or questioning the very legitimacy of its existence, is considered by many Jewish students to be a form of Antisemitism.”

Angered at the dean’s reference to antisemitism, which they viewed as illegitimate, LSJP doubled down on the pledge, publishing a long letter explaining their position. Another letter, signed by “Jewish Anti-Zionists at Berkeley Law,” was published in support of LSJP’s pledge, disputing the charges of antisemitism.

Debates like this one have long been a fixture of American university life — including at Berkeley — and have become increasingly common in recent years as left-wing student groups seek more active forms of solidarity with Palestinians. In turn, Zionist organizations have responded by mounting formidable legal and political defenses of Israel and pro-Israel students on campus, often involving inflammatory accusations and political stunts which redirect attention away from the issue that initially sparked the debate. The current situation at Berkeley is no exception.

After the exchange of letters at the end of the summer, the controversy seemed to die down. For over a month, there was hardly any media coverage of the new student bylaws. But this relative quiet was upended when, on Sept. 28, the Jewish Journal published an op-ed by Kenneth Marcus, a Berkeley Law alumn and pro-Israel legal advocate, under the headline “Berkeley Develops Jewish-Free Zones,” charging that the adoption of the bylaws was plainly antisemitic. 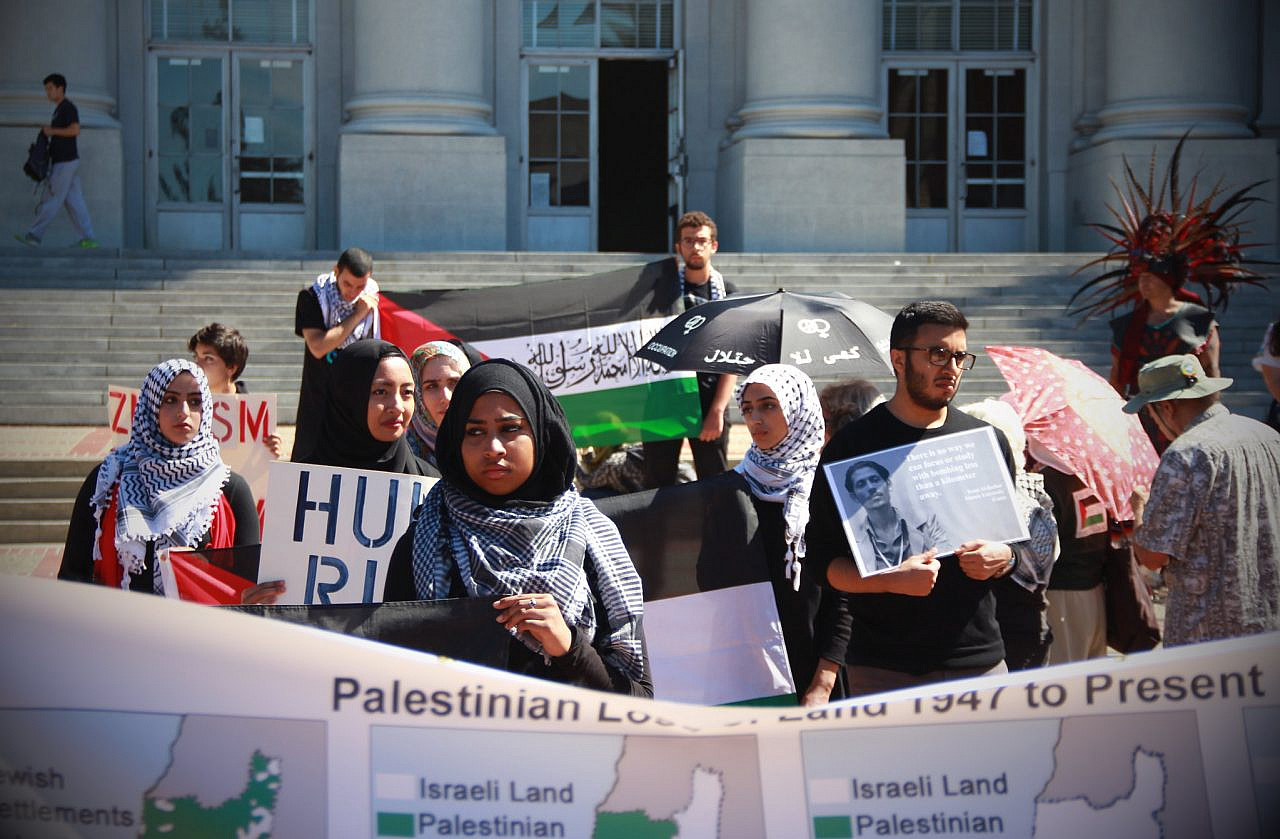 Protest by Students for Justice in Palestine at UC Berkeley, Sep. 23, 2014. (Ariel Hayat/Flickr)

“The students should be ashamed of themselves,” wrote Marcus. “As should grownups who stand quietly by or mutter meekly about free speech as university spaces go as the Nazi’s infamous call, judenfrei. Jewish-free.” Yet the pledge does not mention Jews or Judaism, nor does it exclude pro-Israel students from joining the groups or attending events sponsored by them.

The media firestorm was fierce and swift, adopting Marcus’ line unquestioningly. In the days following the publication of his op-ed, Marcus appeared on Fox News to further press his case, while conservative writers in Newsweek and National Review echoed his charges of blatant antisemitism. The right-wing Israeli tabloid Israel Hayom gave the story front-page coverage, under the headline “Campuses of Hate.”

But the outrage went beyond the media. Barbra Streisand tweeted a link to Marcus’ article, asking, “When does anti-Zionism bleed into broad anti-Semitism?” Dozens of American-Jewish groups called on Berkeley to “take all lawful and necessary steps” to prevent its student groups from “discriminat[ing] against Jews based on any aspect of their Jewish identity, including their Zionism.” Ritchie Torres, an otherwise progressive Democratic congressman representing the Bronx, spoke on a congressional panel about the controversy, citing it as “an example of how anti-Zionism in policy translates into antisemitism in practice.”

Coming in the wake of similar stories at other US campuses, the episode at Berkeley illustrates all the more clearly how pro-Israel actors transform local controversies into public legal disputes in order to advance their ideological agenda. +972 reached out to LSJP and the other eight groups that signed the pledge for comment, but did not receive any responses.

This story’s familiar contours owe much to the structure and environment of university campuses, according to Dylan Saba, a staff attorney at Palestine Legal, a nonprofit that defends the civil and constitutional rights of pro-Palestine activists. On the one hand, he told +972 Magazine, “college campuses are a place of rapid political development and a lot of organization and political activity.” Yet universities are also “dependent on [donors and alumni] for their own financial viability,” Saba added, with the combination of left-wing student activism and the institutional and financial concerns of the university creating “a tinderbox.” 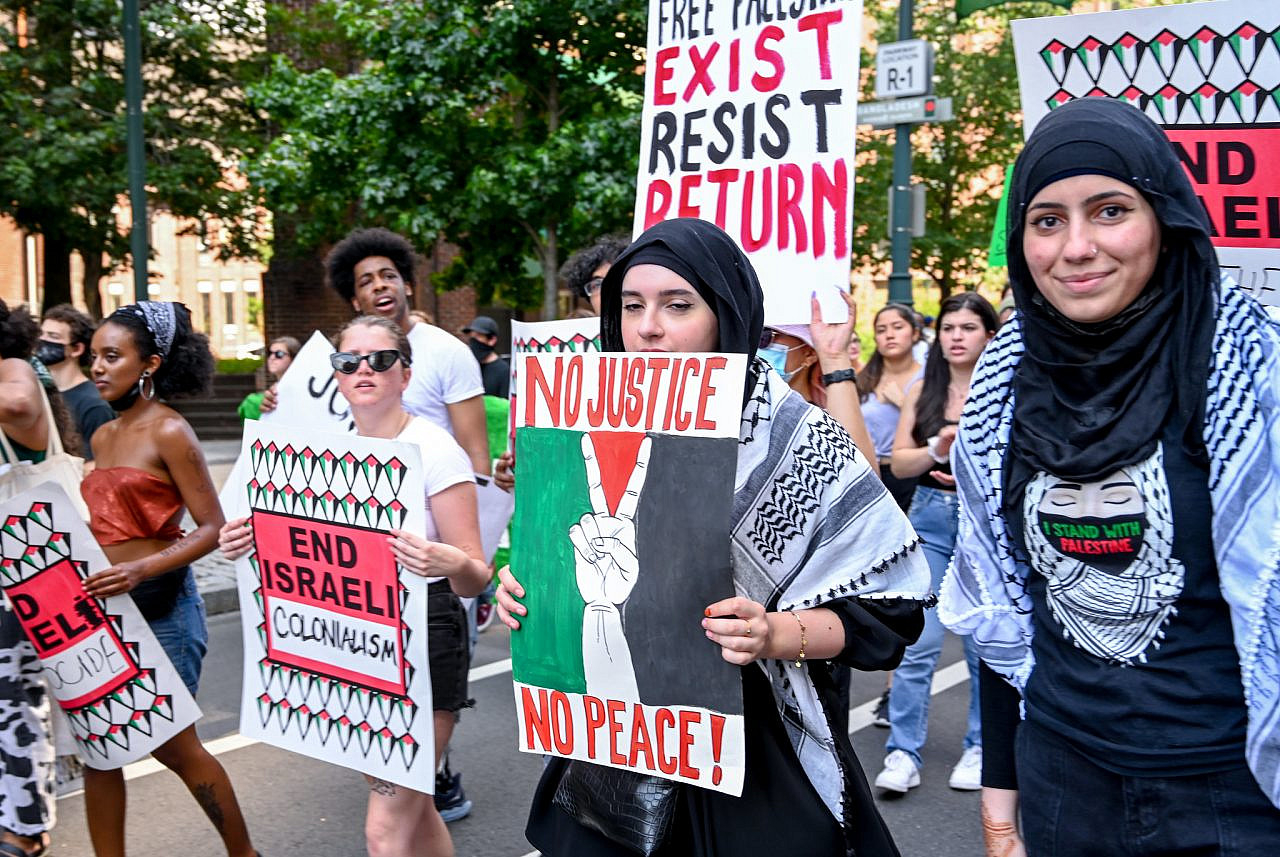 Saba, who was a member of LSJP while studying law at Berkeley, noted that universities have long been a bastion of left-wing activism, from the events of “May 68” in France to the movement to boycott apartheid South Africa. As young Americans, including young American Jews, grow increasingly disenchanted with Israel and Zionism and more strongly supportive of Palestinian liberation, the Israel-Palestine debate on U.S. campuses has taken on new life.

But a closer look at the Berkeley case reveals the underlying dynamics that are crucial to sustaining the frequency and explosiveness of these campus controversies. Over the past decade, right-wing actors have increasingly tried — at times successfully — to codify into law Zionism’s inseparability from Judaism, such that anti-Zionism is automatically held to be antisemitic.

Kenneth Marcus, whose Jewish Journal op-ed revived the controversy at Berkeley, has been a key player in this legal transformation. In 2012, he founded and became chairman of the Louis D. Brandeis Center for Human Rights Under Law, a legal advocacy non-profit that believes “the leading civil and human rights challenge facing North American Jewry is the resurgent problem of antisemitism and anti-Israelism on university campuses.” Much of Marcus’s work has focused on incidents stemming from disputes over anti-Zionist organizing and teaching on campus — which he continued at the federal level when President Donald Trump tapped him to lead the Office of Civil Rights (OCR) in the Department of Education.

As head of the OCR, Marcus spearheaded an effort to reopen a closed legal case against Rutgers University, which had been accused of antisemitic discrimination under the controversial definition of antisemitism produced by the International Holocaust Rememberance Alliance (IHRA), an intergovernmental organization devoted to Holocaust education, research, and remembrance. Marcus also sought to stop recording data on race in preschools while expanding the search for data on religious discrimination. During his time in government, Marcus was the subject of an investigation — following a complaint filed by Palestine Legal — for violating OCR protocols.

Marcus’ singular focus on Israel and anti-Zionism reached its zenith when Trump signed the “Executive Order on Combating Anti-Semitism” in Dec. 2018, which was interpreted by left-wing and right-wing analysts alike as primarily targeting anti-Zionism on college campuses under the mantle of anti-discrimination law. Marcus was widely understood to have laid the groundwork for the executive order, and the OCR later listed “administering President Trump’s historic Executive Order on Combatting Anti-Semitism through rigorous enforcement” as one of his major accomplishments in office. 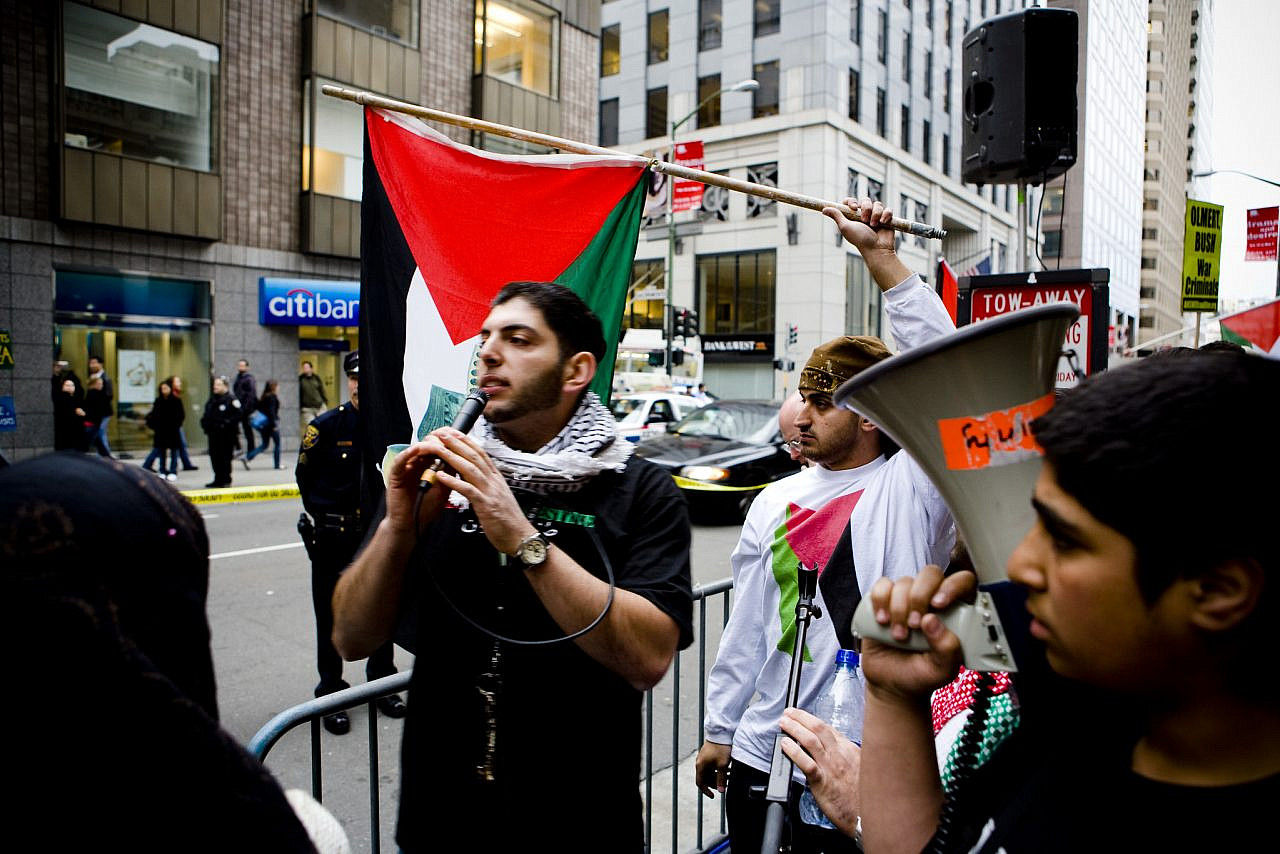 UC Berkeley activists protest in front of the Israeli Consulate in San Francisco, California, denouncing the Gaza siege, and calling for cutting the US funding to Israel, March 7, 2008. (Hossam el-Hamalawy/CC BY 2.0)

Palestine Legal’s Saba told +972 that anti-discrimination law is not meant to encompass political stances such as Zionism. Unlike race, sex, or sexual orientation, “Zionism is not a protected class. You don’t have a right to be a Zionist without criticism,” he said. But legal efforts by Marcus and others to conflate anti-Zionism with antisemitism would effectively turn Zionism into a protected class by defining it as an essential part of Judaism.

In Saba’s view, ensuring that political ideologies remain open to critique is crucial for democracy. “If the constitution protected people from discrimination…for holding political views, then the status quo would be permanently held in place, because no one would be allowed to organize politically,” he said.

‘A Canary in the Coalmine’

According to Noura Erakat, a human rights attorney and associate professor at Rutgers who was also among the founders of LSJP in the early 2000s, the attempts to codify the IHRA definition are a direct response to the growing recognition of Israel’s apartheid policies toward Palestinians — especially following the Knesset’s adoption of the Nation-State Bill in July 2018. Since then, Israeli human rights groups B’Tselem and Yesh Din, as well as international human rights groups Human Rights Watch and Amnesty International, have all produced deeply-researched reports accusing Israel of committing the crime of apartheid in some or all of the territory under its control, following in the footsteps of Palestinian groups that have long made that claim.

“The IHRA definition, which had been percolating before, is now being used to respond to these findings,” Erakat told +972. “How else are these institutions of power going to fight back against coordinated findings [that Israel is] an apartheid regime?” 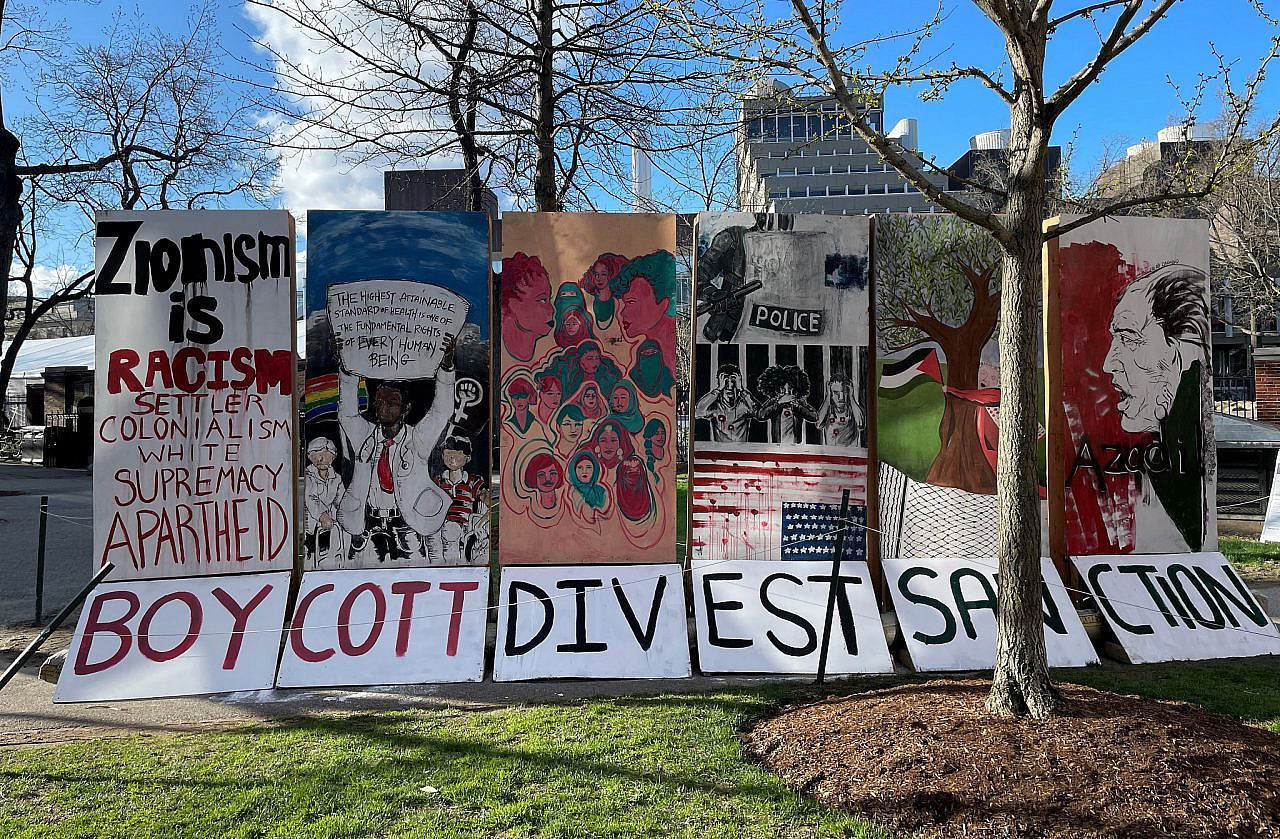 As of now, it is unclear what legal impact the executive order, which remains in effect, has had on campuses. But the conflation of anti-Zionism and antisemitism has remained government policy even after Marcus’ resignation from his post at the OCR in July 2020. Soon after Biden’s election, Secretary of State Antony Blinken wrote to the president of the American Zionist Movement that “the Biden Administration enthusiastically embraces the 2016 International Holocaust Remembrance Alliance’s Working Definition of Anti-Semitism.”

In the weeks since Marcus reignited the controversy, UC Berkeley has attracted no shortage of inflammatory political posturing. Noa Tishby, an Israeli actor who was appointed by Prime Minister Yair Lapid as Israel’s first Special Envoy for Combatting Antisemitism and Delegitimization of Israel, appeared at an event held by a Zionist student organization at Berkeley under a banner reading: “Anti-Zionism is Antisemitism.” She explained that she decided to come to Berkeley because of Marcus’ op-ed.

The following week, a conservative nonprofit called Accuracy in Media drove a truck depicting Hitler through Berkeley’s campus, emblazoned with the words: “All in favor of banning Jews, raise your right hand.” Groups on both sides of the controversy over the pledge condemned the stunt.

Like most such controversies, the Berkeley case will likely die down in the coming weeks. “These things come and go in waves,” Erakat told +972. But she sees this specific episode as “a test case” which could have consequences far beyond Berkeley. “It’s no surprise that the efforts are being concentrated at an elite institution, targeting these students, because it will have reverberations,” she said. “It’s a canary in the coal mine.”

Nate Orbach is a writer from Boston who is currently based in Jerusalem. Twitter: @NateOrbach