Hoping to boost the liberal image of country, Israel has increased efforts to use the gay community for advocacy and PR assignments. 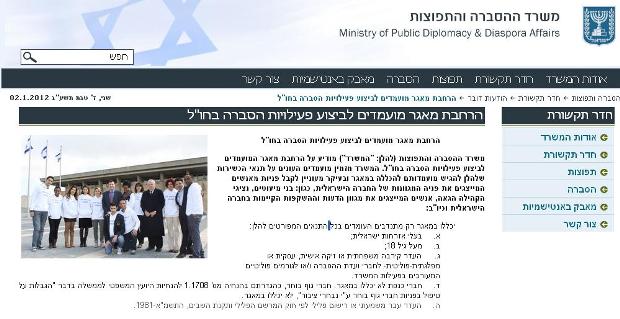 Prime Minister Benjamin Netanyahu was the first to appoint a government minister in charge of propaganda, advocacy and international public relations. Minister Yuli Edelstein has taken this position at the head of the Hasbara office so seriously that he has even asked Netanyahu to be relieved of other government duties so that he can concentrate on advocacy and propaganda.

Edelstein, a member of Likud, is known for his rightwing views. Recently, he posted a status message on his Facebook page referring to the Arabs as a “despicable nation.” Asked by +972 blogger Yossi Gurvitz to clarify this statement, a spokesperson for the minister said that Edelstein did in fact mean “all the Arabs.”

Yet this doesn’t keep the minister from to look to some of those despicable Arabs to represent Israel abroad. In an ad published recently on the Ministry’s official website, Arab and gay candidates were invited to apply for advocacy work abroad.

The office for Hasbara and Diaspora […] is announcing the widening of the pool of candidates for Hasbara [propaganda] activities abroad. The office invites candidates who are meeting the following requirement conditions to send an application for the pool, and especially would like to receive applications from people who represent the diverse faces of Israeli society, such as members of minority groups, representatives of the gay community, people who represent the variety of opinions in the Israel society, etc.

It should be noted that Minister Edelstein and his party are not very hospitable to gays either. When Yisrael Beiteinu introduced legislation allowing marriage-like status for non-Jews, Likud joined the Orthodox parties in blocking an attempt by the left to add gay and lesbians to this arrangement. Yet it’s no secret that Israel has found the gay rights issue especially useful in its propaganda campaigns.

In recent years, speakers for Israel have been advised to compare the status of gays in Israel to Muslim countries, and advocacy groups give prominence to this point in their publications; Israel is using targeted advertising campaigns for the gay community, and has recently put a four-page ad in the last issue of Attitude, the most popular gay magazine in Europe. A few months ago, a PR man connected to Prime Minister Netanyahu’s office promoted a Youtube video in which an LGBT activist named Mark encouraged human rights organizations not to support the Gaza-bound flotilla. Mark was soon exposed by the site Electronic Intifada as an Israeli actor.

A recent op-ed in the New York Times titled “Israel and ‘Pinkwashing’” dealt with the efforts to use the gay rights issue to conceal the massive human rights violations in the West Bank and Gaza. This piece drew heavy criticism from Jewish writers – including liberal ones – and was even cited by an aid for Netanyahu in a public letter detailing Netanyahu’s decision to decline an offer to author an op-ed in The Times.

Read Also:
Hasbara: Why does the world fail to understand us?

Correction: An older version of this post stated that Edelstien is from Israel Beitenu. He is a member of Likud.