Hundreds of settlers launch dozens of attacks against Palestinians across the West Bank, in the wake of two Palestinian attacks that left four Israelis dead. Rights groups demand the army intervene to protect Palestinians from settler violence. 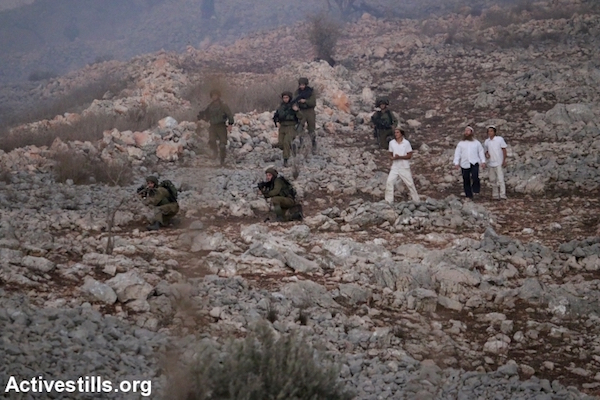 Israeli settlers carried out dozens of violent attacks across the West Bank over the past two days in the wake of the murders of four Israeli civilians by Palestinians.

In the northern West Bank village of Bur’in masked settlers were filmed rolling boulders and burning tires down a hill toward Palestinians.

Groups of settlers, at times accompanied by the Israeli army, threw stones at and attacked Palestinian residents, who threw stones back at them. The settlers also set fire to a number of Palestinian-owned agricultural fields.

The soldiers did nothing to stop the settler attacks, instead choosing to shoot tear gas, rubber bullets — and reportedly live ammunition — against the Palestinians defending their property.

Acres of fields and olive orchards were damaged in the settler arson attacks. 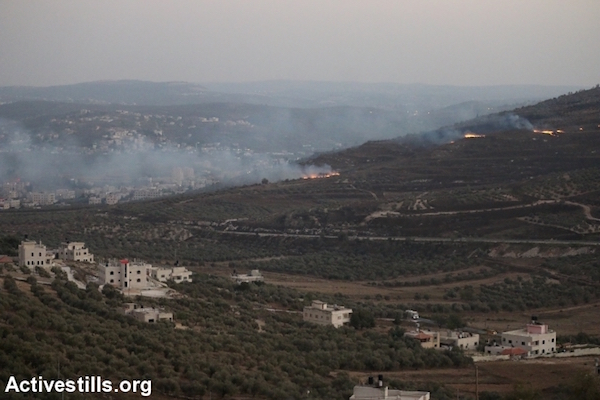 A view of Palestinian-owned fields that were set on fire by Israeli settlers in the West Bank village of Bur’in, near Nablus, October 3, 2015. (Ahmad Al-Bazz/Activestills.org)

Elsewhere in the northern West Bank, settlers gathered along major highways and threw stones at Palestinian vehicles, shattering windshields and resulting in a number of injuries, according to Israeli human rights organization Yesh Din.

Settlers also reportedly surrounded a number of Palestinian houses and pelted them with stones.

In one case, a Palestinian woman and her children traveling in an ambulance were pelted with stones near the Israeli army’s Huwwara checkpoint near Nablus.

The Israeli military has a clear obligation under international law to protect the Palestinian civilian population, including from Israeli citizens. Human rights groups like Yesh Din have long protested what they call “standing idly by,” whereby the army does nothing to stop settler attacks against Palestinians.

“Yesh Din condemns the revolting murder of Itam and Na’ama Henkin and hopes that the murderers will be caught quickly, are put on trial and sentenced to prolonged sentences,” the human rights organization said in a statement.

“However, the murders do not justify acts of revenge against an innocent population,” the statement continued. “We call on the army and police to fulfill their duties and protect the Palestinians from these aggressive acts.”

Rabbis for Human Rights and B’Tselem put out similar statements.

In Hebron, a large group of settlers marched through the streets of the segregated city chanting “Death to Arabs” and reportedly attacked Palestinian-owned homes.

Elsewhere in Jerusalem, a Palestinian man was reportedly attacked by a Jewish mob and struck a bystander with his car while trying to escape.

Racist right-wing activists held a rally in Jerusalem on Friday in response to West Bank shooting attack, demanding that the government exact revenge upon Palestinians. Two people were arrested for incitement at that event. Notorious ultra-nationalist right-wing activists Baruch Marzel, Itamar Ben-Gvir, and Benzi Gopstein prominently attended the rally, according to Walla!.

Meanwhile, Palestinians in the Ramallah area Saturday night were said to be blocking all access roads leading to the home of the man who killed two Israelis in the Old City Saturday. Earlier, Israeli authorities notified his family that they would demolish the family home. By blocking the roads, local youths were attempting to stop the army from carrying out the demolition.

Israel uses punitive home demolitions against Palestinian murder suspects, a practice rights groups describe as collective punishment because it harms people who were not involved in carrying out any crime. The Israeli Supreme Court, however, has repeatedly approved the practice, accepting the state’s argument that it serves as a necessary tool for deterrence.