Until few days ago, I wasn’t able to vote. According to the Israeli system, I still cannot vote. However, my friend Liel Maghen asked to vote in my place, an act that if taken en masse, has the potential to shock and challenge Israel’s policies of oppression like never before. 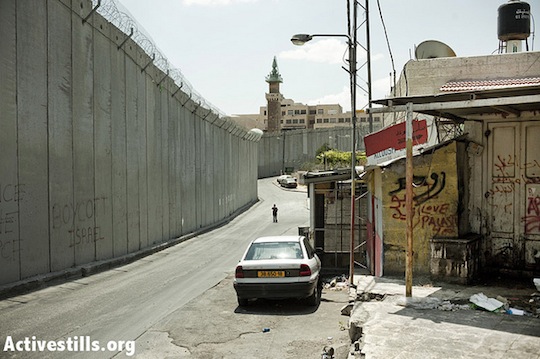 Many Palestinians in Jerusalem are watching the Israeli elections unfold before their eyes without being able influence their outcome. After 1967, Israel annexed Jerusalem but didn’t annex its population. Palestinians in Jerusalem became “residents” in their homeland. They were given some rights but were given no way to influence the government or its policies that regulate every small detail in their lives.

My life is a good example. I am a Palestinian, born and raised in East Jerusalem, yet I have no right to vote in Israel. In addition to not having the right to vote, I have no right to build on my land and no right to celebrate my identity. If I choose to live abroad for a while, I am not allowed to come back. When I was 16, I lived two miles outside Jerusalem and I was told my Jerusalem residency would be revoked if we didn’t move to East Jerusalem. We had to leave our house, which we owned, to move to rental home in the center of Jerusalem. On our way to Jerusalem we passed by the Ma’ale Adumim settlement, which is also couple of miles outside Jerusalem. However, Israeli Jews can live there with in settlements with no objection by the government that they are living outside Jerusalem. It was yet another reminder that I am not an equal under Israeli law. Settlers can live anywhere, but I cannot. Even in my homeland, someone else decides where I am allowed to live or not live.

My residency in Jerusalem is conditional and according to Israeli law it is quite easy to lose. A few years ago, I started working for extended periods of time in the U.S. Soon after, I was told by the Israeli Interior Ministry that if I stayed abroad for too long I would lose my residency. Later I was told that if I receive American citizenship, which I am eligible for, I would lose my residency in Jerusalem. I could lose my right to ever come back to live in Jerusalem. I watch my American Jewish friends move to Israel and they receive two citizenships under the law of return; I cannot even get one. In order to travel, the Israeli government gives me a travel document, on which it is written that I am Jordanian.

Ah my intractable wound!
My country is not a suitcase
I am not a traveler
I am the lover and the land is the beloved.
The archaeologist is busy analyzing stones.
In the rubble of legends
he searches for his own eyes
to show
that I am a sightless vagrant on the road
with not one letter in civilization’s alphabet.
Meanwhile in my own time I plant my trees.
I sing of my love.
It is time for me to exchange the word for the deed
Time to prove my love for the land and for the nightingale.

It is not that I am excited about the current elections, which are likely to bring in a government that doesn’t uphold my values. It is the principle that I refuse to be stripped of my human rights. Some might argue that Palestinians in the West Bank can vote for the Palestinian Authority. However, the PA functions more like a municipality than a state. In effect, the Palestinian Authority has no control over borders, immigration issues, airspace, water, and electricity, and cannot even issue a birth certificate or identity card without the Israeli government’s approval. The laws governing all aspects of Palestinian life are decided in Israel and not by the Palestinian Authority. Others might point out that many Palestinians citizens of Israel don’t vote. However, they do have the right to vote but choose to not use it. I personally disagree with those Palestinians who don’t vote because we must speak up, organize and mobilize. Voting is part of that strategy.

The current stalemate in the peace process has created a reality of one state with an ethnocentric democracy. We live in a state where millions of people are denied their rights to influence the government that controls their lives. Many Palestinians live under military law and military rule and are denied basic rights in the legal system.

I am not advocating a one state solution in this article. I am simply refusing to exchange my basic rights for everlasting negotiations and continuous oppression. The excuse that my rights are taken away because the negotiations have not brought about a solution yet is unacceptable to me. I will not have my basic human rights put on hold until negotiations produce results. I ask Israel to treat me like a human being, to give me equal rights and to treat me like a human being. If Israel would like to negotiate until a two-state solution is viable then they should do so. All I ask is that my basic rights are respected, and for an end to the occupation. Israel and the PLO can then take their time negotiating.

Until few days ago, I wasn’t able to vote. According to the Israeli system, I still cannot vote. However, my friend Liel Maghen asked a few days ago to vote in my place. I told him whom to vote for and he is casting his ballot according to my choice. When Liel told me that he wanted me to vote in his place, I wasn’t surprised. He is a true liberal democrat who is willing to let go of his privilege in order to support equal rights for Palestinians. I have seen him do it before through his relationships with Palestinians. I can only imagine what would happen if more people like Liel take the same step, if they said: “If you don’t give equal rights to my Palestinian friend then I will give up my right to be equal with him or her.” Imagine if tens or hundreds of thousands did that. The Israeli system would receive a shock, a challenge to the policies of oppression like never seen before. Ordinary people can challenge the system and create a new reality that proclaims true democracy.

Israel cannot control another people and still claim to be a democracy.

Related:
Who gets to vote in Israel’s democracy?