Netanyahu, Bennett and Lieberman all promised Israelis quiet and prosperity without having to end the occupation. This is what we got instead. 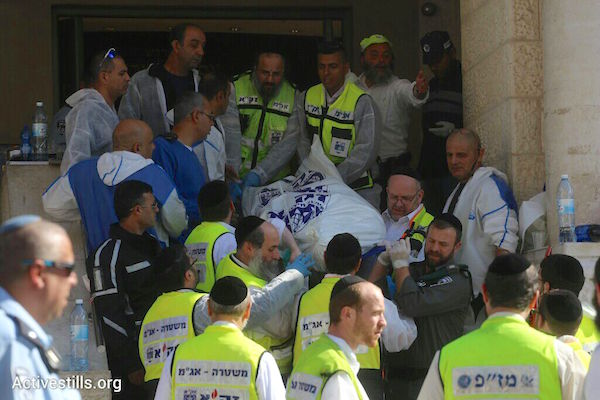 Following this morning’s horrifying terror attack, it’s not so difficult to imagine how Naftali Bennett, Avigdor Liberman or Benjamin Netanyahu might describe the current government if they weren’t its leaders. You can almost see them showing up at the scene of the attack and screaming into the microphones denouncing the “wicked government,” recalling every last pogrom in Jewish history.

But no dice. Netanyahu has been prime minister for five years now and Liberman and the settlers, his partners in it. This is all taking place on their watch. If they think that Mahmoud Abbas is the problem — as their public statements declared this morning — then they should deal with him. We all know that’s not going to happen. This government needs Abbas much more than the Palestinians need him. The Palestinian leader has a dual role: he maintains quiet in the West Bank, and is also the punching bag the Israeli Right uses to explain away its reverberating failures.

Netanyahu promised Israelis prosperity and quiet without having to solve the Palestinian conflict. That has been his promise since the 1990s. To Netanyahu, terrorism is just card we’ve been dealt, and only military force can resolve it. There is no problem with continuing to build in the settlements, including inside the Palestinian neighborhoods of Jerusalem, because there is no connection between the settlements and the actions of the Palestinians. That’s what Netanyahu has been saying for decades already — both to the world and to Israelis. There’s no reason to give Palestinians their rights because that endangers Israel: they can make due with “economic peace.” It’s okay to discriminate and legislate against Israel’s Arab citizens. Hell, they should be saying thank you that we even let them live here; things are much worse in every other country in the Middle East. The government is here to serve the Jews, and the Jews only. And if we continue to act this way, aggressively and determinedly, we’ll enjoy stability, security and economic prosperity. That’s Netanyahu’s theory, and the Israeli public bought it because the price was so low and the payoff sky high. We’re not responsible for anything that happens and we don’t have to make any compromises on anything.

At this point any reasonable person should realize what nonsense Bibi has been selling. In recent years Netanyahu has benefited from mere coincidence: Palestinians were tired from the intifada; Abbas decided to try the diplomatic track; the Arab world imploded; and Israel’s high-tech economy was booming. It seems as if Netanyahu has been delivering, but none of those things had anything to do with him. It was all an illusion, an ongoing deception. Since this June we have woken up to the true meaning of Netanyahu’s vision, in which Israel rules over 6 million Palestinians — Israeli citizens, East Jerusalem residents, the subjects of military rule in the West Bank and those besieged in Gaza — and the only thing he’s offering them is more of the same: the cruel hand of the military law, discrimination, violence, land expropriation, home demolitions, mass arrests and bombs from the sky.

For half a decade Netanyahu and Jerusalem Mayor Nir Barkat have been selling us lies about Israel’s unified and prosperous capital, all while 40 percent of its residents live in impoverished neighborhoods and are not represented politically, aren’t given building permits or even full municipal services. Some of those neighborhoods have been shoved eastward into a strange no-man’s land on the other side of the wall, an area into which neither the police nor the municipality dare to venture. At the same time, with the encouragement of the city and under the protection and cover of the police, settlers are being put into the hearts of the Jerusalem’s Arab neighborhoods, and right-wing members of Knesset are marking new targets for their projects — the Temple Mount, Silwan and Mount of Olives. After all that, is anybody really surprised that Palestinians have no trust in the police? That they view the municipality as their enemy? 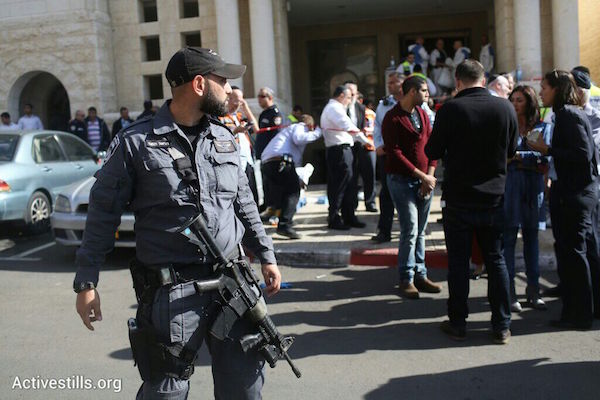 Nothing can justify the murder of worshipers in a synagogue. The murders should be condemned, and Jerusalem’s residents, Jews and Arabs alike, deserve absolute personal security. But it’s no time to be sanctimonious: the overall responsibility is the government’s. Netanyahu, Bennett and Liberman’s vision — the same vision that is being put into action with the help of Livni and Lapid’s acquiescence — is one of civil war between Jews and Arabs; a war that sometimes crawls under the carpet and sometimes explodes with violence. Nothing beyond that. Not two states and not one state, not warm peace and not cold peace — simply nothing. Just stricter laws against stone throwers, laws against the “release of terrorists,” laws against the Arabic language, new prisons to hold all of the new arrestees, gradual annexation, and ensuring the Palestinian population remains relegated to a status as second-, third- or fourth-class citizens.

That’s the plan. That’s how they think they’ll quiet can be attained. That’s how they think “the Arabs will learn to accept us,” even though history and all logic prove exactly the opposite. Oppression begets violence, which begets more and harsher oppression, which begets even more terrible violence. “Holding onto the occupied territories will make us a nation of murderers and murder-victims,” read an advertisement by the lefty political movement Matzpen, three months after the Six Day War in which Israel conquered East Jerusalem, the West Bank and Gaza.

There is a simple truth here that needs to be reiterated: it’s entirely possible that a just political resolution with the Palestinians won’t guarantee peace and quiet, certainly not in its first stages. But only in such a deal, and in such a deal alone, lies the potential for a better future.

Instead, we are caught in the implementation phase of the Israeli Right’s political plan — both in Gaza and in Jerusalem. This is what Netanyahu and Bennett’s “solution” looks like. They might blame the PA and the Israeli Left and the High Court and the world for their inability to deliver, but this is their doing. Or more accurately, this is what the beginning of their doing looks like. The rest will be much worse — for Israelis and Palestinians alike.

Related:
There’s nothing static about the West Bank ‘status quo’
No one left for Bibi to blame – except, of course, Abbas
One- or two-state solution? The answer is both (or neither)