The olive harvest is historically a period when settler violence against Palestinians and their trees increase. The name of a local settlement from which two youths were arrested last week is spray painted onto the mosque’s wall. 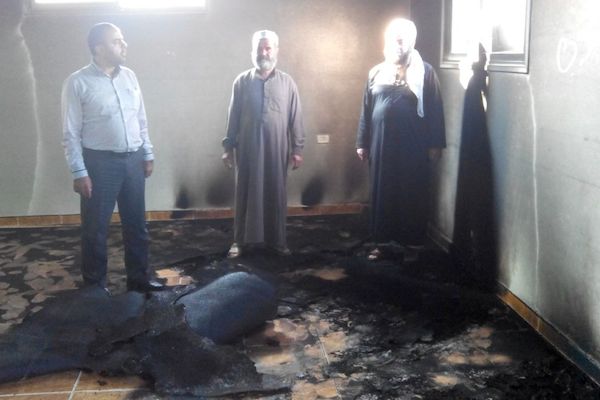 Palestinians survey the damage inside Aqraba’s mosque, which was set on fire early Tuesday morning, October 14, 2014. (Photo by Rabbis for Human Rights)

A West Bank mosque was set on fire and vandalized early Tuesday morning in what on the surface appeared to be a hate crime attack by Jewish settlers.

The vandals set fire to the village’s mosque and spray painted nationalist and racist graffiti, including the name of a nearby Israeli settlement, Tapuah. The mosque’s floor, walls and holy books were damaged by the fire and smoke.

Two settlers from Tapuah were arrested in recent days on suspicion beating a Palestinian women harvesting olives in the nearby village of Yasuf. Olive trees were also vandalized in Aqraba and Burin, a village that has taken the brunt of harvest-related violence in recent years. 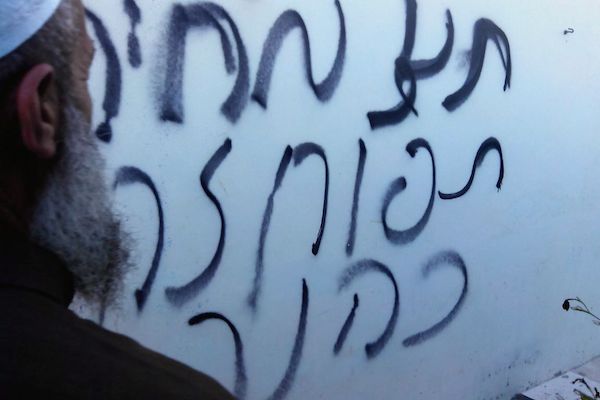 Graffiti left at the scene of the mosque arson in Aqraba reads: “Price tag; Tapuah is Kahane”, October 14, 2014. (Photo by Rabbis for Human Rights)

The olive harvest, which began earlier this month, is historically a time when settler violence against Palestinians increases.

“From the moment the olive harvest begins, we witness a series of serious incidents involving attacks on harvesters and damage to trees,” explained Noa Cohen, a researcher for Israeli human rights NGO Yesh Din. “This recurring phenomenon is a result of failure to enforce the law.”

Since 2005, according to Yesh Din data, police failed to prosecute 99.6 percent of all reported cases of damage to Palestinian olive groves and trees. Out of 246 investigations Israeli police opened in those years, only four resulted in indictments.

Read also: Settler violence: It comes with the territory

“The numbers highlight the lack of deterrence regarding attacks on olive trees owned by Palestinians: only four indictments over the course of nine years, and hundreds of cases investigated are tantamount to permission from the authorities to continue attacking the livelihood of thousands of families,” Cohen added.

Despite pledges by Israeli politicians to crack down on settler violence against Palestinians, colloquially known as “price tag” attacks, and the establishment of a police unit dedicated to fighting the phenomenon, it persists and effective law enforcement remains elusive.

Last year +972’s Larry Derfner reported in depth on settler violence and why it is not being stopped, both by Israel and the international community. Read his report here.