What is the difference between warning about Arab hordes heading to the polls and warning of Arabs being democratically elected to parliament? 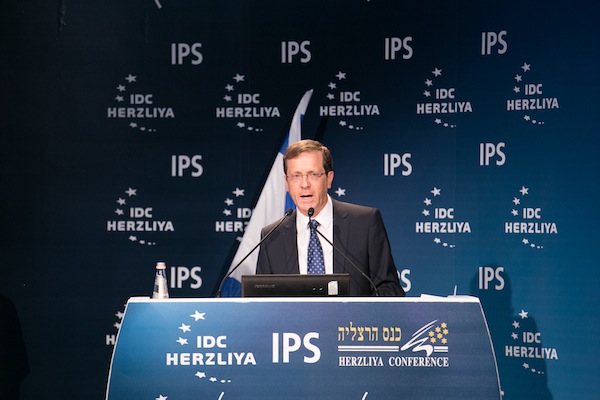 A few days after Benjamin Netanyahu swept the elections — partly attributed to his election-day racist warnings about Israel’s Palestinian minority — I wrote a piece about his rival, Isaac Herzog, who was lugging his own brand of anti-Arab racism along with him on the campaign trail.

Throughout the race, Herzog positioned himself as an alternative to Netanyahu who would reach a peace agreement with the Palestinians, save Israel from looming international isolation, and return the country to its rightful place among the community of nations. In reality, Herzog refused to consider forming a coalition with the Joint List, joined the right-wing chorus by voting to disqualify MK Haneen Zoabi from the elections, and released a video featuring former intelligence officers lauding him as someone who “understands the Arab mentality,” and who “has seen Arabs in all kinds of situations” (including “in the crosshairs”).

Some might counter that in the current climate, a “dovish” underdog has little choice but to turn into a hawk during elections. I accept that premise: politicians always have and always will make election promises they do not keep. But if there was any doubt that a racism lies deep down in Herzog and his ilk, it was belied on Sunday evening when the Zionist Union leader warned attendees at the Herzliya Conference of the “demographic emergency” facing Israel:

There you have it. The leader of the Israeli opposition, the great white hope of the Israeli Left, the man who was supposed to rescue Israel from itself, thinks only Jews are worthy of being elected prime minister in the Jewish and democratic state. What is allowed for Jews is, at best, hardly afforded to Palestinians. At worst, it is a prized possession that must be protected from non-Jews at all costs. After all, what is the difference between warning of Arab hordes heading to the polls and warning of Arabs being democratically elected to parliament?

At this point, Herzog is doing us a favor by making it clear that the issue does not lie specifically with him, or even Netanyahu for that matter. The consensus worldview in Israel — which has historically been propagated by the Zionist Left — is one of separation between Jews and Palestinians. This is not because Israelis and Palestinians “need a divorce” as famed Israeli author Amos Oz, a prominent voice the Zionist Left, has stated on numerous occasions. It is because the Jewish majority cannot abide any real Palestinian power — political or demographic — in the Jewish state. Don’t believe me? Just ask the same Amos Oz how he feels about a one-state solution:

It turns out that the great “liberals” of Israeli society aren’t so much worried about a lack of a peace deal between Israelis and Palestinians as they are of becoming a minority. In this sense, peace and an end to the occupation aren’t an end in and of themselves, but a vehicle for maintaining and making permanent a demographic majority that will ensure Jewish rule over a country where 20 percent of the population is not Jewish. Most of all, however, Herzog and Oz’s warnings are a promise that if and when the occupation does in fact end, Israel will not be transformed into a fundamentally different project.