More than 7,000 Palestinians, including hundreds of minors, are currently in Israeli prisons. Honoring prisoners and ‘freedom fighters’ isn’t just a Palestinian tradition, however. Israelis do it, too. 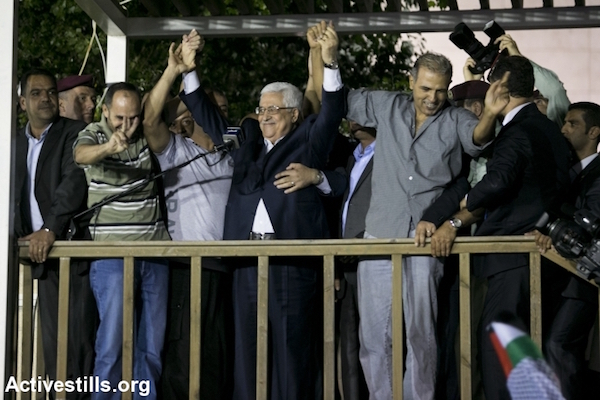 For many Israelis Palestinian prisoners are “terrorists,” whose imprisonment is the natural order of things. But for Palestinians they are freedom fighters who sacrificed their liberty for the good of the Palestinian struggle for liberation from Israeli military occupation.

Since the year 2000 over 90,000 Israeli arrests of Palestinians — including 11,000 minors and 1,300 women — were been recorded by the Palestinian Prisoners’ Club, a prisoner support NGO. The Israeli army, which under the law of occupation is the sovereign in the West Bank, has not hesitated to arrest the elderly and children, laborers and businessmen, students and teachers, journalists, government officials, and even elected parliamentarians, 65 of whom Israel has arrested since the year 2000 — six of them remain in Israeli prisons.

Read also: Marwan Barghouti is planning a comeback — from behind bars

Palestinians also commemorate the hundreds of compatriots Israel is holding in administrative detention without charge or trial, and the thousands of administrative detainees who have been released. They highlight the plight of dozens of sick prisoners. They highlight the plight of dozens of prisoners the IPS holds in complete isolation from other human beings. They remember the thousands of prisoners who were exposed to violence during their arrests and imprisonment. They remember the hundreds of Palestinian minors currently in Israeli prisons, including dozens under 16 and those who haven’t been allowed to see their families for various reasons.

Since last October, when the current wave of violence began, Israel has arrested over 4,800 Palestinians, including 1,300 minors. That means that almost every night, dozens of people are pulled out of bed, brought by combat soldiers — often violently — to interrogation rooms where they are humiliated and sometimes hit. They are pushed to inform on other Palestinians, pressured to confess to things they often didn’t do, and then put on trial by military officers who send them to prison for months or years.

It is worth mentioning, of course that honoring prisoners and freedom fighters is not something only Palestinians do. Jewish “underground fighters” from the British Mandate period still receive payments from Israeli authorities to this day, seven decades after their release (Hebrew). “Prisoners of Zion” also receive payments from the state (Hebrew). Prisoners are celebrated by the state and their sacrifice is taught to Israeli children in schools (Hebrew). Thousands of people each year visit the “Museum of Underground Prisoners.” The Israeli government invests significant resources in treating and rehabilitating former prisoners (Hebrew). The list goes on.

The image of the prisoner is present in many areas of Palestinian life in the occupied territories. Almost every family has some connection to a prisoner or detainee. For them prisoners are not criminals but freedom fighters, exactly as Jews saw their own prisoners prior to the establishment of the State of Israel. Prisoners’ Day is a national day of commemoration meant to embrace those who sacrificed their personal freedom for the good of a national struggle for independence, with hope that they will one day return home to their families when the Israeli military regime in the occupied territories comes to an end.