Despite the great turn out (around 15,000), some disturbing things took place at last night’s protest that the major news outlets will not report on. At first I was pleasantly surprised to hear slogans and chants in Arabic, something I don’t remember ever hearing at a protest in Tel Aviv. It seemed almost too good to be true. There were also Palestinian flags being waved, also something you do not usually see. (At best, you see signs, like those belonging to Gush Shalom, that show an Israeli flag side by side with a Palestinian one.)

However, then the news broke: two activists from the Anarchists and the Sheikh Jarrah Solidarity movement were arrested by police. One was told it was because he was in possession (not even waving) a Fatah flag. The policeman informed him that if he threw it out, he could spare arrest, but he refused. Here is video of the police searching him and then arresting him. He was released later on that night.

The other activist, seen in the photo here below, was reportedly treated with severe police brutality. It is not clear why the police attacked and arrested him. 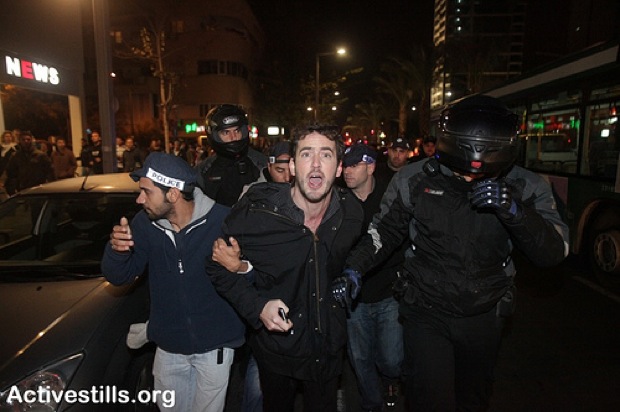 Fellow activists gathered around and demanded he be released, which eventually he was. In both cases, the fact that they were released shortly after being arrested only strengthens the fact that the arrests were gratuitous and likely had zero legal basis.

In another incident, while I was walking against the traffic of the protest, towards the back of it, I noticed several policemen hovering around a large man with a kippa (yarmulke). I tried to listen in and managed to hear that he was caught with a knife. He was claiming it was an everyday knife he uses (to peel fruit on the go?) and could not possibly be used to hurt someone. The police were not really interested in hearing his version of the story, are were already going through the bureaucracy of arrest. It is not clear whether they found him with the knife pulled out, in which case he clearly was presenting a threat, or whether they stopped him because he looked suspicious and decided to search him. Either way, what is a guy dong carrying around a knife at a massive protest? Here are two pictures I managed to take of him. I apologize for the poor quality: 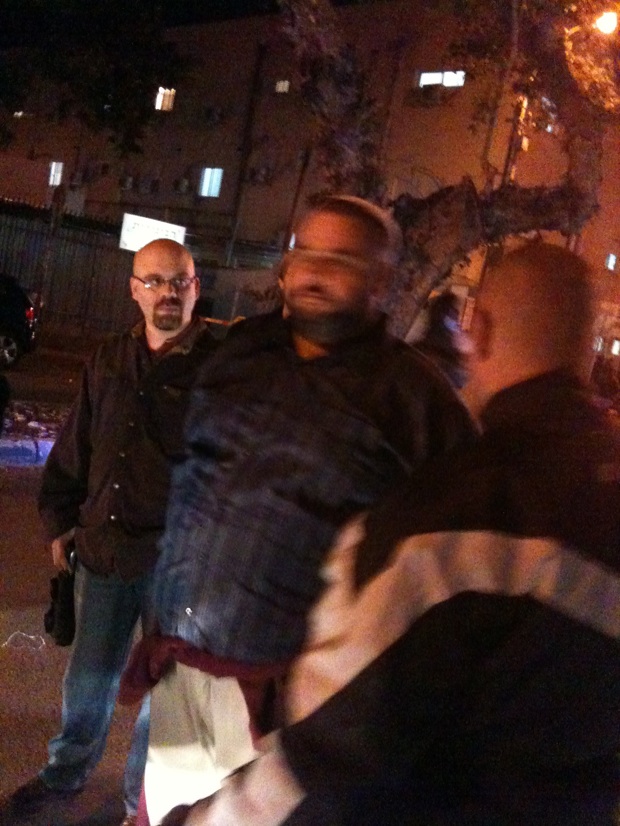 Man arrested at protest after being caught with a knife. (Photo: Mairav Zonszein) 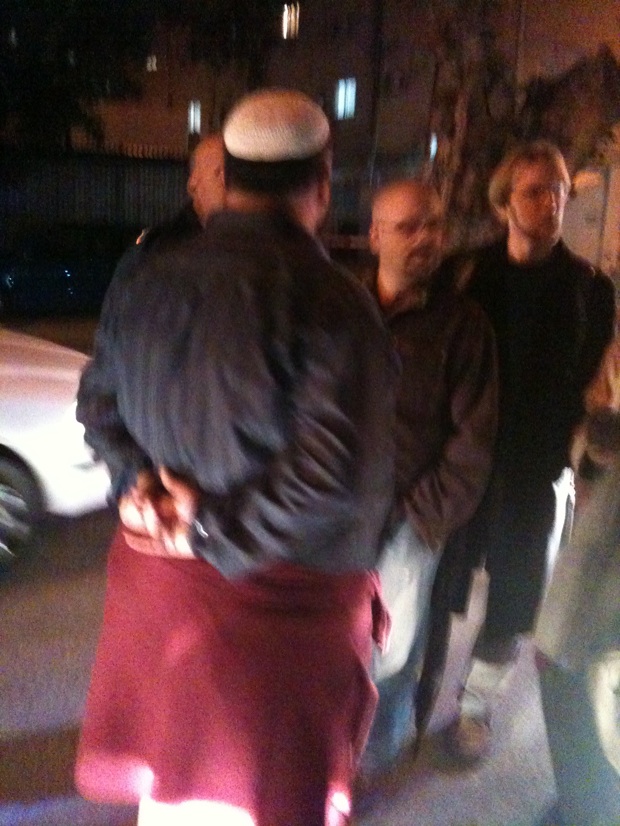 And just some thoughts about the protest:

The fact that the demonstration’s main slogan was “Democracy – since it’s still possible!” is quite sad. It beckons the question: What is the point on the spectrum in which a country veers so far away from democratic standards and practices that it can no longer be called a democracy? Is it not safe to say that when a protest is organized strictly in the name of democracy itself, we have reached that point?

Furthermore, as important as it is for people to take to the streets for a few hours on a Saturday night in such dire times, it may have the reverse intended effect. The message of the protest, that we will not allow the right to take over the country and kill democracy, is misconceived. As Noam Sheizaf recently wrote, there is this notion that there is an “authentic” Israel that is good and democratic and it is being hijacked by an extreme minority. However, maybe a more challenging and profound analysis is needed in order to realize that there is something systematic, at the core of this country’s defining values, that has paved the way for such racism and fascism to flourish, and that demands serious treatment.

We cannot continue to insist that Israel is Jewish and democratic and then organize a protest every time racist events or repressive legislations take place. It is like sweeping the problem under the rug until the next dust bunny shows up.