What we’re seeing today is not a new intifada, but an ever-more sophisticated version of the one Palestinians have been fighting all along.

In a pre-interview with a television news producer yesterday, I found myself stammering over a familiar question: as a Palestinian, do you have any hope for the future?

Steeped in the day-to-day of our “conflict” with Israel, I find it difficult to respond to such banalities – not least because I’m in no position to represent all Palestinians.

So after attempting something articulate with the producer, I decided to get in touch with my friend, Emad Burnat, the Oscar-nominated director of 5 Broken Cameras and as good a gauge as any of the situation in the West Bank.

If you’ve seen his film, you’ll know why. In it, Emad documents his West Bank village’s nonviolent struggle against Israeli land grabs. Produced from more than 700 hours of footage, the documentary features intimate portraits of Bil’in’s leading nonviolent activists, who maintain a remarkable sense of hope amidst the violence and tragedy that surround them. But here’s the thing: the earliest of the film’s footage dates back to 2005, when common wisdom had it that the Second Intifada was over. 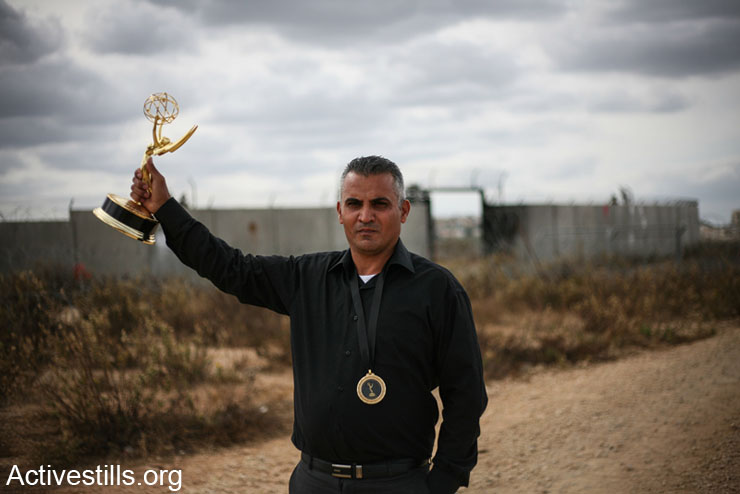 Five broken cameras director and Emmy Award winner, Emad Burnat, holds his award in front of the Israeli wall, during the weekly demo against the wall and occupation in the West Bank village of Bi’lin, Novmber 29,2013. The village celebrated return of Burnat to Bil’in in today’s weekly demonstration.

So when I asked Emad today if a third intifada was coming, his response wasn’t surprising. Instead, it reminded me of something he published just before his appearance at the 2012 Oscars:

“I come from Palestine. I have lived my entire life under military occupation, and I have no memory of a time without struggle.”

Ask anyone in the West Bank or Gaza and they’ll tell you: Israel’s menacing stranglehold over every aspect of their lives has never ebbed, and neither has Palestinian resistance to it.

From the daily struggle to access their lands, their schools, or their places of worship in the West Bank, to braving the persistent hum of drones and the “shrill of sorties” over Gaza, Palestinians have never abandoned their quest to “shake off” the manacles of occupation.

If Western journalists need images of keffiyeh-clad young men sporting slingshots and stones to call that an intifada, yesterday’s day-long clashes with the Israeli army should satiate them. But make no mistake: in villages like Bil’in throughout the West Bank, in Jerusalem and Gaza, the Palestinian intifada – like the Israeli policies it resists – has never paused.

If anything, it has grown to include a groundswell of international support, as evidenced by the runaway successes of the BDS movement and the growing roster of artists refusing to perform in Israel.

Of course, none of this can spare Palestinians the current ravages of Israel’s ongoing occupation. But taken together, rather than a “new intifada,” these efforts represent an ever-more sophisticated version of the one Palestinians have been fighting all along. Its inclusiveness, its principled nonviolence, and its momentum are indeed cause for this Palestinian to hope.

More on the kidnappings:
Three kidnapped Israeli teens found dead in the West Bank
Our problem with selective sympathy for young victims
How the public was manipulated into believing the teens were alive