Something so basic, so normal, so human — like going home late from work, visiting family or a loved one in another town — becomes an overwhelming and frightful task in the face of the occupation. 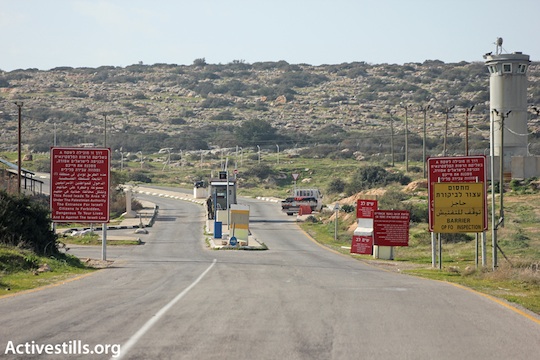 An IDF checkpoint in the West Bank [illustrative photo, by Ahmad Al-Bazz/ Activestills.org)
Last night, when I was headed from Ramallah to Bethlehem, I went through a checkpoint. As the service taxi I was on slowed down and approached the checkpoint, I saw an unusually large number of soldiers. There were two armored jeeps and a police car. I counted more than 10 soldiers. They were searching a small car. A man, presumably the driver, was on the ground on the side of the road, handcuffed and blindfolded.

The scene was disturbing to say the least. A ripple of fear ran through the passengers on the service taxi, even though the soldiers didn’t stop us. Everyone craned their heads to see what was happening. Once the man was out of sight, passengers continued to shift in their seats and speculate about what was happening.

The image of a human being, bound and left on the ground, stayed with me all night. When I woke up this morning, I wondered about the man. What happened to him? Was he detained? How will he feel driving at night in the future?

A lot of Palestinians I know don’t travel between West Bank cities at night. For one, public transportation shuts down fairly early in the West Bank. Secondly, the army seems to be more active at night than it is during the day (although, the daytime is difficult in other ways – as I wrote about here) and this creates an environment of fear that is especially pinned to the night.

A Palestinian colleague explains to me that the tendency not to travel or go out at night started during the First Intifada, “when there were curfews, when people stayed in and parents were overprotective because going out meant facing soldiers.”

“It’s that fear which is…” he trails off and taps his chest to show how it’s been internalized. He says that when friends ask him to go out at night, it’s reflexive for him to suggest they stay in instead. “When you grow up like this since you’re a kid it affects you. The generation that is young now is the one that grew up with this.”

But, as the scene at the checkpoint last night suggests, it’s not just the people who came up during the Intifadas. On a personal note, my partner, who holds a green ID, was coming to visit me one evening and was taken off a service taxi at a checkpoint and arbitrarily searched by soldiers. Something so basic, so normal, so human — like going home late from work, visiting a friend or family or a loved one in another town — becomes an overwhelming and frightful task in the face of the occupation.