A tourist map of Jaffa presents a reimagined, Zionist version of the city: Jaffa 2.0 is a boutique neighborhood of Tel Aviv, with a smattering of ‘local’ (read: native) color. But the map itself simply represents a much broader process of destruction and reconstruction. 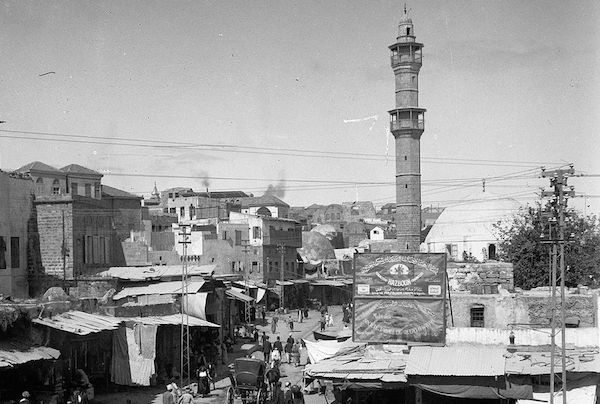 The market place in Jaffa, circa 1900. The photo was taken from the Clock Tower Square, with Mahmoudiya Mosque in the background. (Library of Congress)

If you go into Jaffa’s tourist information centers (run by the Tel Aviv-Jaffa Municipality) and ask for a map, you’ll receive a colorful, user-friendly guide promising to tell you the best places to go to sample Jaffa’s food, markets, history and more — and in four different languages, no less.

The problem is that the version of Jaffa the map presents is a narrow, carefully-curated one, of chic boutiques, European-style art galleries and a smattering of Christian history. None of those four languages are Arabic, and a quick scan of the rest of the official tourist information center’s materials also reveals a dearth of Arabic.

On one side of the map, a zoomed-in view of the Old City, only two Muslim sites are labeled: the al-Bahr Mosque (also known as the Sea Mosque), thought to be the oldest in Jaffa, and the Mahmoudiya Mosque next to the flea market. 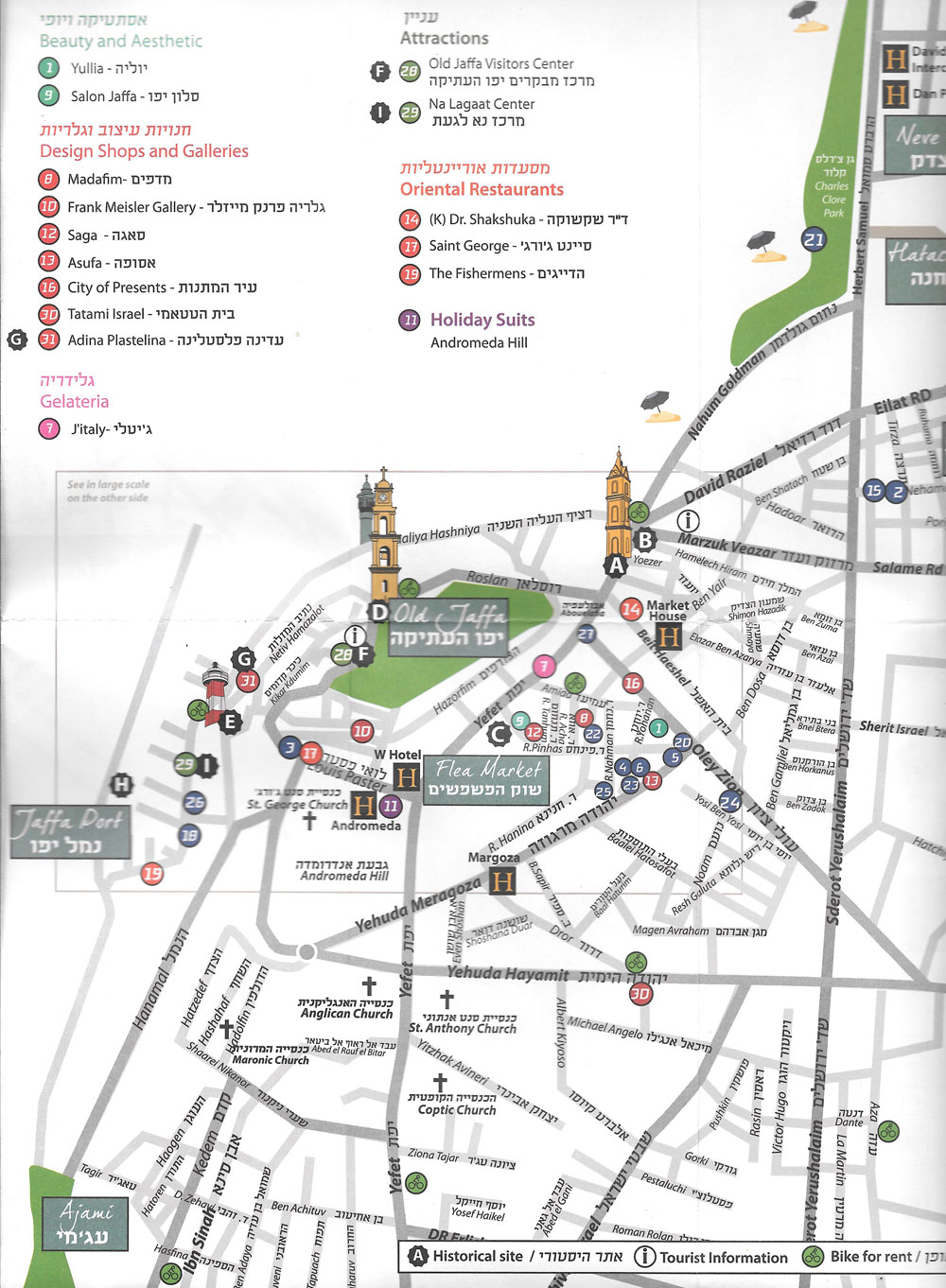 The map distributed by the municipal tourist center in Jaffa.

Only the al-Bahr mosque gets a minaret icon — which on one side of the map is partly obscured by a church spire and on the other side is the same color as the background. Neither mosque receives an explanation in the map’s key. On the zoomed-out side of the map, the Mahmoudiya Mosque does not appear at all.

Meanwhile, numerous churches are labeled with either an icon of a cross or an image of a spire. Several Christian sites receive explanations in the map’s key, which also refers to “Jewish and Christian traditions.” The words “Palestinian,” “Arab,” and “Muslim” do not appear in the map’s key or descriptions once. The word “oriental” does feature, however— as a category of restaurant, which fits neatly into the colonialist model of either erasing or subsuming the native culture and then passing off the safely fractured remnants as ‘local color.’

Zoomed-in view of the city’s logo

When asked about the map — which features the logos of city-owned tourism and development companies — a municipality spokesperson first denied that the logos appear, then accepted that they do but said that it had no official ties with the map. Instead, the city spokesperson told +972 Magazine, “municipal bodies with logos on the map pay for their complexes to be detailed on the map,” but do not influence its content.

(Incidentally, a quick scan of the Tel Aviv municipality’s tourism website reveals that, as with the map, the words “Arab,” “Palestinian” and “Muslim” do not appear once. There is, however, a special page devoted to “Jaffa and Christianity.”)

None of this is an accident, and the map — problematic as it is — is not itself the issue; it simply represents the outcome of a broad set of processes and attitudes. (A tourist map of Jerusalem recently highlighted in Haaretz is also an experiment in exclusion.) Jaffa has, for some decades, been undergoing a process of gentrification, which one can track moving south through the city as new, high-end apartment buildings pop up one after the other. The effect here, as with all gentrification, is to push out the original residents — in this case, Palestinians — who can no longer afford soaring real estate prices.

But there is more to it in Jaffa than just physical reconstruction: its history is being refurbished at the same time as its streets, itself a process that began with the foundation of the State of Israel. Jaffa in its previous form — a major regional port, a thriving center of trade and historic Palestine’s largest city — was an inconvenient contradiction to the Zionist narrative. In the Israeli imagination, Jaffa was a deprived backwater that was “liberated” by Zionist forces in 1948 (which is how the conquering of the city is described on tourist plaques).

The city of Jaffa became a palimpsest in the hands of those crafting the Zionist narrative: multiple layers of its history have been scratched away in order to create a story fit for a nation in the process of building itself. Seventy percent of the structures in Jaffa’s Old City were destroyed between 1960 and 1985, according to historian Menachem Klein, completely gutting its Arab history and presence. The Old City is, in fact, not old at all: it’s been mostly reconstructed and turned into a quaint “artists’ village” comprised of Jewish artists. (Similar processes have taken place in Safed and Ein Hod.) Pisga Park, that green expanse on the tourist map, covers much of the ruins of old Jaffa. This is vandalism on an industrial scale, but such destruction is inevitable within the context of a colonial project that seeks control over both physical and conceptual territory. Israel has developed mythologies in the same way that it develops land, such that each ground-breaking on a new building site shatters not only the earth but also the history that was displaced to make way for the ‘new world.’ Whether deliberate or not, the error spotted by Palestinian sociologist Salim Tamari on a visitor map at the entrance to Jaffa Port, on which the viewer’s location is marked “You are here!” in English and Hebrew, and “You were here!” in Arabic, is particularly illustrative.

And it’s not just Arab and Palestinian history that has been wiped off the map: Jaffa’s Jewish history also had to make way, according to Menachem Klein, author of Lives in Common: Arabs and Jews in Jerusalem, Jaffa and Hebron.

“Those who founded Neve Tzedek [Tel Aviv’s “first” Jewish neighborhood – nr] hated Jaffa, so they left it, according to the Zionist narrative,” Klein told +972 Magazine. “They set up the narrative for the establishment of the state — Tel Aviv represents the independent Jewish state, dividing ‘ourselves’ from ‘them,’ building something ‘European’ and not ‘Oriental,’ and ‘liberating’ Jaffa.

“Arab Jews lived inside Jaffa, and Tel Aviv depended on Jaffa for produce — which goes against the whole Zionist mythology,” Klein continued. 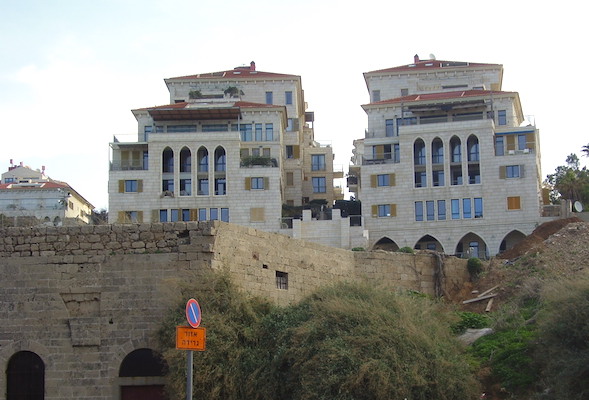 Andromeda Hill, a collection of luxury apartments next to Jaffa port, January 28, 2011. Opened in 2000, the site blocked access from Yefet Street — one of Jaffa’s main arteries — to the sea. A petition filed by civil rights groups in 2007 won residents the right to pass through the complex between 8 a.m. and 10 p.m. (Avishai Teicher/CC 2.0)

Highlighting Jaffa’s Christian presence is a related, but discrete part of this reconstruction and Zionist reimagining. As a recent tour through the city with Israeli NGO Zochrot highlighted, the preferential treatment of Jaffa’s Christian Palestinians began when it was conquered in 1948 and the nascent Israeli government began expropriating properties throughout the city.

Even as many Palestinian homes and institutions were seized, church property was left in the hands of its original owners. This was largely part of a divide-and-conquer policy, a fundamental colonial tactic. By leaving churches in the hands of Jaffa’s Christian Palestinians, the Israelis hoped not only to encourage collaboration, but also to promote a sense of division — because the city’s Muslim residents would naturally wonder what their neighbors had done in order to be able to hang on to their assets. It should be noted too, however, that the newly-formed state of Israel was also loath to attract negative attention from the church’s powerful friends abroad.

The combined effect of these various processes is to recast Jaffa as no more than a boutique neighborhood of Tel Aviv, with a smattering of Christian history and scraps of dismantled, ‘local’ (read: native) color. As Klein points out, there is a very narrow, proscribed place for Palestinians in this Zionist creation: “They are ‘allowed’ to be in Abu Hassan and Abulaffiya [a hummus joint and a bakery respectively, both popular with Israelis – nr]. But there is no room for a Palestinian quarter in the geographical and cultural map of Tel Aviv, the city that pretends to be cosmopolitan.”

During its nineteenth-century heyday, Jaffa was locally referred to as “Um el-Gharib” — the mother of strangers — due to its ability to attract all-comers to its shores. Decades of destruction and reconstruction, and of erasing and rewriting, are transforming Jaffa into a stranger to itself.