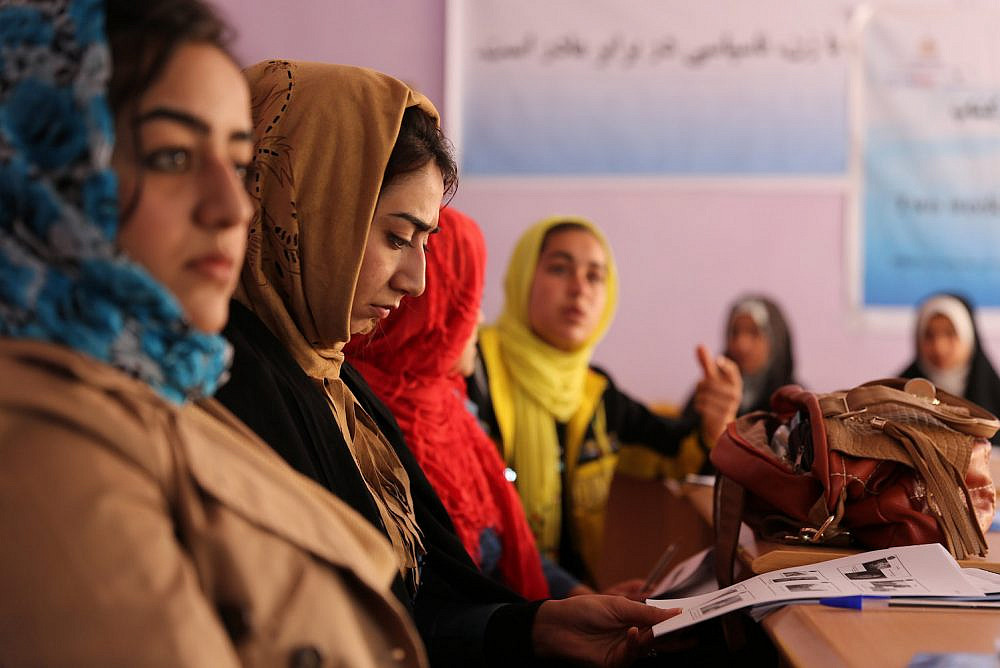 In the wake of the U.S. military withdrawal from Afghanistan in August, U.S. politicians and media pundits alike have argued that Afghan women’s rights are now in peril as they weather life under the repressive and cruel Taliban. Many have gone on to make the case that the United States’ presence as a force for securing women’s rights was in fact a necessary one, further reinforcing the idea that in the end, the United States was a benevolent force in the country.

While Afghan women activists and leaders have fervently resisted the Taliban’s resuscitation — as demonstrated by the many protests that have taken place in cities like Herat, Kabul, and Ghazni over the past few weeks — this hardly signals the view that the 20-year U.S. occupation was liberatory. In fact, as many activists have been clamoring for years, the United States played a significant role in exacerbating existing structures of corruption, warlordism, and bribery that allowed the Taliban to return as a major political player, two decades after they were ostensibly ousted from power.

Despite the wanton violence the United States and its allies wreaked on Afghanistan through their military intervention, bookended by one of the most chaotic military withdrawals in contemporary history that has left hundreds of thousands of people stranded under a regime they had no part in bringing to power, it remains difficult for the American public to frame the U.S. mission in Afghanistan as anything but a gift to the Afghan people. Though the invasion and occupation were done without the meaningful consent of Afghan civilians, self-determination and sovereignty are now being depicted as opportunities that the United States has afforded Afghanistan in the wake of its irresponsible exit.

The notion of “benevolent governance” as a system of power relations refers to the idea that certain forms of authoritative rule are an expression of generosity on the part of those who rule, usually under the pretext that a given population lacks the infrastructure, reasoning, and public will to rule themselves. It is a discourse through which imperial projects justify themselves as anchored in an ethics of care as opposed to what they really are: a politics of exploitation, extraction, and geopolitical grandstanding. As Women’s Studies scholar Carole Stabile and Media Studies scholar Deepa Kumar have noted, “suffering women are subjects for political and public concern only insofar as their suffering can be used to advance the interests of US elites.” 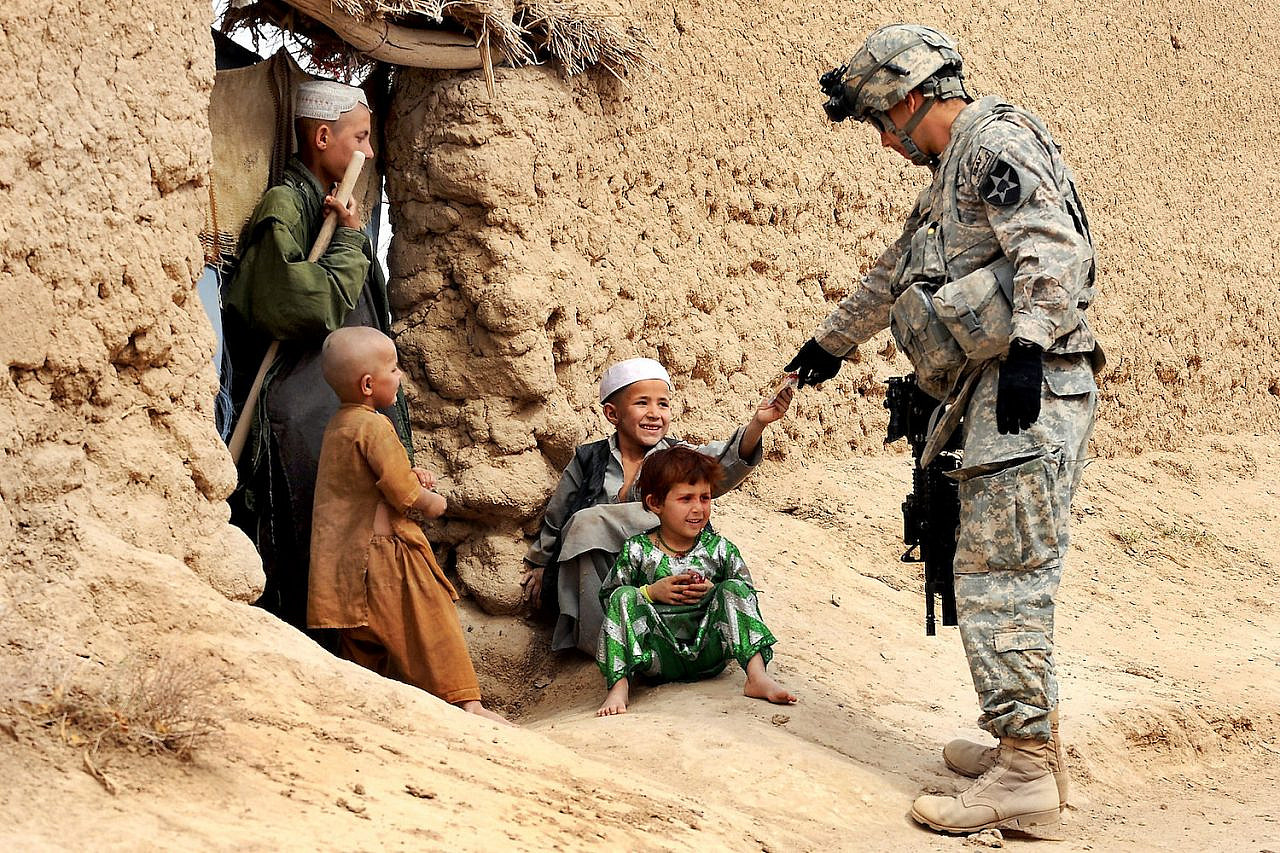 Benevolent governance has also been used by the Taliban to explain its role as a “caretaker government” in the wake of the U.S. withdrawal, demonstrating how the rhetoric is also weaponized by developing nations and terrorist networks alike. It is a rhetoric premised on the idea that populations are simply passive victims desperate for aid and support.

From the frying pan into the fire

From the beginning of its intervention, benevolent governance has been the U.S. government’s discourse of choice to justify militarized humanitarianism in Afghanistan. Former first lady Laura Bush’s infamous 2001 radio address one month into Operation Enduring Freedom is a prime example of how the language of care is inextricably bound with the language of war. As Bush noted, “Because of our recent military gains, in much of Afghanistan women are no longer imprisoned in their homes. They can listen to music and teach their daughters without fear of punishment…The fight against terrorism is also a fight for the rights and dignity of women.”

While Operation Enduring Freedom was framed as a mission of women’s empowerment, Afghan women have experienced a multitude of violences at the hands of the United States and the corrupt political entities it empowered over the last 20 years. The spectrum ranges from U.S. drone strikes in civilian areas to compounding the role of corrupt warlords and former Taliban sympathizers in the national government. War, as many scholars have shown, is in itself a form of gender-based violence, and in the case of Afghanistan, many women have suffered under the hands of warlords and their empowerment through U.S. bribes. As Afghan activist Malalai Joya has said: “Unfortunately, they [the United States] pushed us from the frying pan into the fire as they replaced the barbaric regime of the Taliban with the misogynist warlords.” 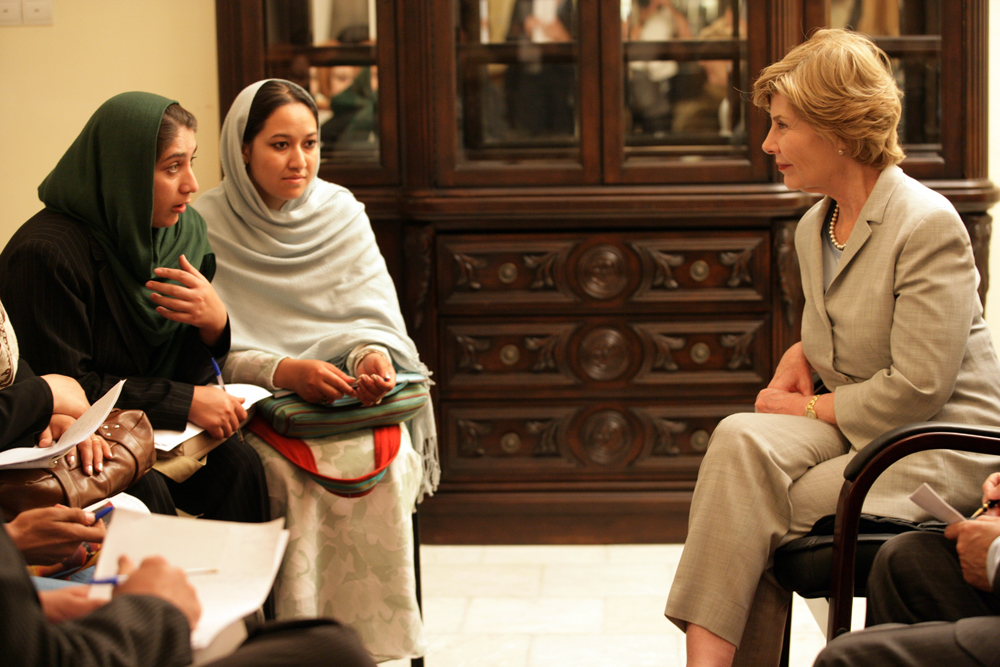 Mrs. Laura Bush speaks with faculty and students from Afghan universities and international schools, Sunday, June 8, 2008, during an unannounced visit to Kabul. (Shealah Craighead/Courtesy of the George W. Bush Presidential Library and Museum)

The U.S.-led intervention was based on the idea that with enough military strength, the United States could bomb the Taliban out of existence and create a new landscape in which Afghan women would become empowered subjects, as measured through a distinctly white liberal feminist illusion. This discourse relied on situating Afghan women as both a homogeneous entity and as passive recipients of liberal feminist ideals. Immediately after Sept. 11, images and videos persistently circulated showing the horror of life for Afghan women under the Taliban, with a hyper focus on women’s wearing of the blue burqa as the ultimate sign of their repression and the need to bring them into the 21st century.

The rhetoric of benevolent governance has persisted and renewed itself throughout the U.S. mission in Afghanistan. For example, in the wake of the 2014 Bilateral Security Agreement under President Barack Obama and the announcement to reduce American military presence by 2016, many policymakers and NGOs objected to the plan, saying that women’s rights were in a precarious position. Yet such policymakers never cited women’s rights when drones killed upward of 400 Afghan civilians, according to conservative estimates. Such objections did not emerge when the Massive Ordnance Air Blast (MOAB) bomb was launched in April 2017, wreaking environmental destruction throughout Nangarhar province. Never mind, too, the ecological damage wrought by the thousands of cluster bombs on Afghanistan’s natural environment.

The ‘generosity’ of colonial interventions

The use of women’s empowerment as a pretext for imperial domination is an old story. The construction of a geographic imaginary, in which the West is a site of liberation for women and the East a site of oppression, is a longstanding dichotomy weaponized by empires to sanction, and in many ways cover up, their broader political and economic agendas.

In turn of the century Egypt, for example, the British government claimed that Egyptian women were being oppressed by a hyper-patriarchal culture and needed the British to bring them into the modern era, given how supposedly advanced Victorian British women were at the time (which was an illusion, given the repression and disenfranchisement of the female subject in Victorian England). In the early 1900s, as shown by Algerian writer Malek Alloula, the French government commissioned photojournalists to take photos of Indigenous women in the Kabyle communities of southern Algeria as veiled and locked behind windows; these were later revealed to be staged photos, in order to show the French public that colonial interventions were key to bringing Algerian society, and women in particular, into modernity. This same ideology has been key to the Israeli settler colonial project in Palestine: following the 1917 Balfour Declaration, the British systematically employed the rhetoric of benevolent governance by situating Zionist settlers as responsible for the “civilizing mission” in Arab Palestine. 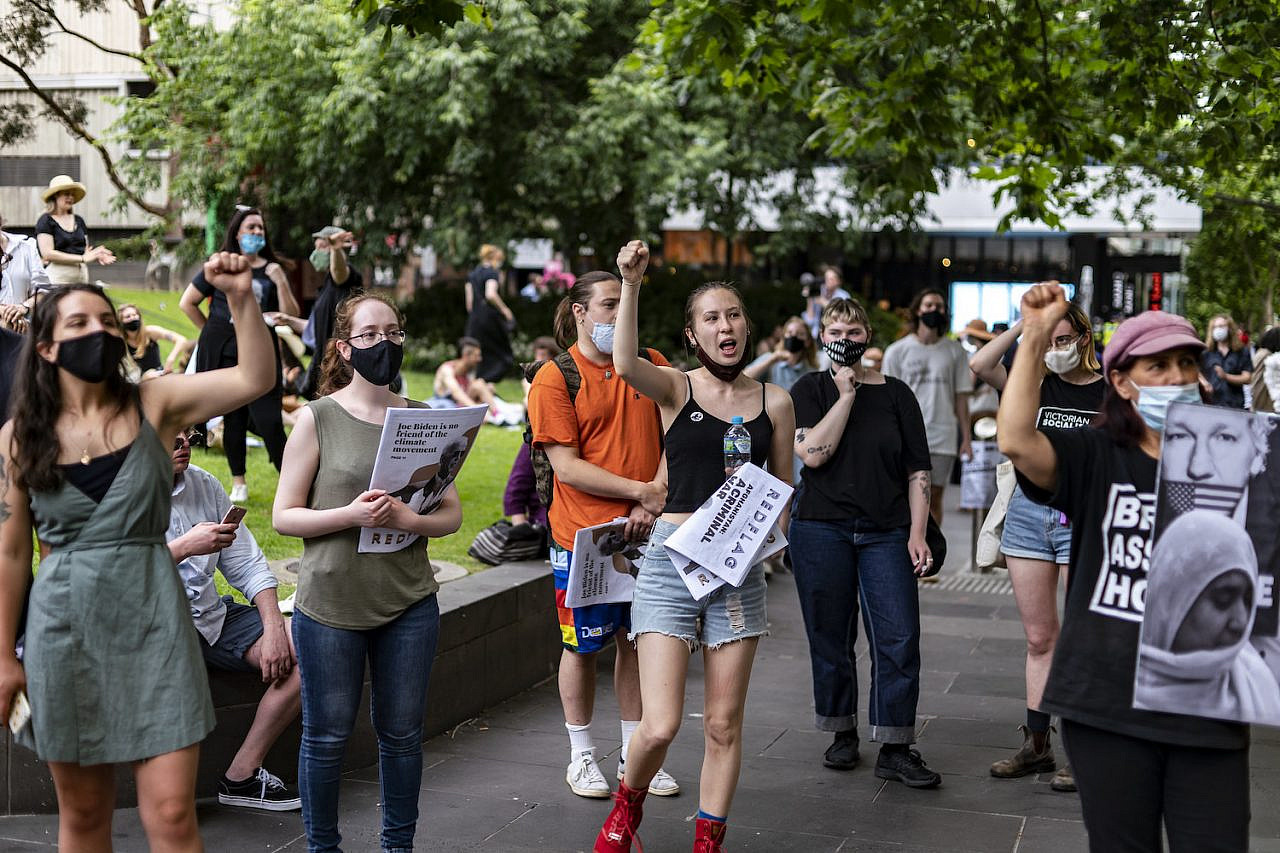 Members of the Melbourne Antiwar Alliance protest and call for justice for war crimes committed by the Special Air Service (SAS) in Afghanistan, Melbourne, Australia, November 27, 2020. (Matt Hrkac/CC BY 2.0)

While Afghanistan has not been subject to the same dynamics of settler colonialism as Palestine (in terms of the dispossession of land and the permanent settlement of non-Palestinians), it has been subject to similar logics of dehumanization that gave license to prolonged military occupation. As Palestinian scholar Noura Erakat has shown in her book “Justice for Some,” a key to the occupation of Palestine was the initial premise that the Palestinian people as a society did not exist, and those that did were depicted as savage and barbaric. In the wake of the Israeli-Egyptian siege on Gaza, Afghan American collectives have expressed their solidarity with the Palestinian people based on their similar experiences of enduring military rule, the dehumanization of Indigenous life, and multiple generations of uprootedness.

What all these discourses have in common is that they situate colonial interventions as rooted in an ethics of benevolence and generosity, rather than of subjugation, dominance, and power. While the United States may have framed its mission around the exportation of freedom, and later nation-building, in the end its “successes” came in the form of enriching private American contractors who made fortunes in the industries of mineral extraction and other development projects, and enriching American defense contractors, including in the munitions industry.

Despite the erasures of violence produced by the U.S. narrative around Afghan women’s rights, a distinctly anti-imperial feminism still exists among many Afghan women activists both in Afghanistan and in the diaspora, and continues to gain momentum. Diasporic groups are not hesitant to call out the U.S. project in Afghanistan as one that brought about more pain and suffering to the Afghan people than it did hope and possibility. Protests throughout the United States over the past month have been a marker of that discourse.

As those in the Afghan diaspora desperately seek to evacuate their loved ones and find some sort of relief for those who managed to get to transit countries, and as Afghan nationals await news of whether and how they might exit the country, the violence of 20 years of benevolent governance has never been clearer.

Helena Zeweri is assistant professor of Global Studies at the University of Virginia. She received her Ph.D. in Cultural Anthropology from Rice University and master's in Near Eastern Studies and Anthropology from New York University and The New School. Helena’s research centers on refugee mobilities and border control policies, migrant women’s activism, and global humanitarianism, with a focus on the United States, Australia, and the Afghan diaspora.