During a recent interview with Charlie Rose in New York, Israeli Finance Minister Yair Lapid tacitly reveals why the Israeli-Palestinian conflict endures and why Israel will only accept peace on its own terms. 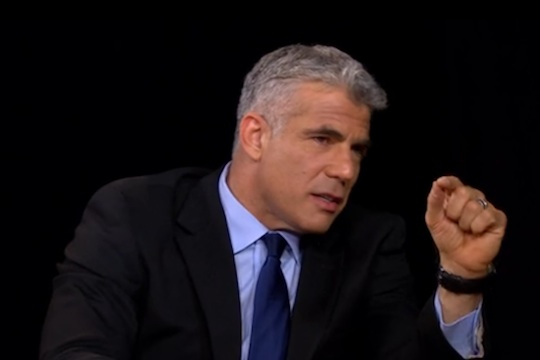 Over the past week or so, as the United Nations General Assembly brought leaders from around the world to New York, several of them made their way onto American political talk shows.

Charlie Rose, one of America’s best and most watched interviewers, hosted a number of political leaders from the Middle East, including Bashar al-Assad of Syria (from Damascus) and Hassan Rouhani of Iran. Rose also interviewed three major politicians from Israel: Benjamin Netanyahu, Tzipi Livni, and Yair Lapid.

Lapid, in particular, sat with Charlie Rose for extended coverage, receiving a lot of attention for a public show at the 92Y in New York. The event actually overshadowed an interview with Rose from earlier in the night on his show that I thought was more interesting. While the majority of the interview was an expose of Lapid as a journalist turned politician, there is a telling six or seven minutes near the end that should be watched closely.

Rose begins on the Palestinian issue by inquiring as to the differences between Lapid and Prime Minister Netanyahu over Palestinian recognition of Israel as a “Jewish” state. Lapid replies by saying that such recognition is not important. “My father did not come to Haifa from the Budapest Ghetto to get recognition from Abu Mazen [Mahmoud Abbas],” he quips.

Lapid says the Israeli non-Jewish minority should have its rights, like any minority, but that Israel is a Jewish state, and he aims to keep it that way. He delves into the demographic threat facing Israel, saying “if we continue to rule three or four million Palestinians, the identity of Israel… will vanish.”

We need to separate ourselves from the Palestinians. It is not marriage that I am seeking, it is a decent divorce.

All of this is not new, but the really interesting part begins after 44 [it is easy to skip ahead].

Rose catches the significance of that statement, inquiring:

Are you saying you can’t have justice for the Palestinians and security for the Israelis?

This is where Lapid begins to get a little flustered, not losing his cool, but clearly not knowing how to answer without being completely forthright. He says that justice and security are possible but that the two parties want different things and therefore it takes time.

Rose continues to press him, asking, “What about the Palestinians’ interest in justice are you not prepared to give them – if you were prime minister or King David.” Lapid continues to squirm, at which point Rose calls Lapid out for being evasive and then lets him off the hook.

Although seemingly innocuous, Lapid reveals exactly what he means by “wanting different things” and “it taking time,” later in the interview. When Rose asks him about settlements in the West Bank and Jerusalem, Lapid says that there is a major difference between the two and that Israel will never divide Jerusalem. Rose says then you cannot have peace, to which Lapid retorts:

I will give you an example. For years and years everybody thought that without the Right of Return the Palestinians will never, never do anything. And then Abu Mazen six months ago or eight months ago sits on an interview on Israel’s Channel 2 — not BBC, not Charlie Rose — but Israel’s Channel 2 and says, ‘I understand now that I will never go back to my home in Safad,’ which is Israel, mainland Israel.

So what happened? What happened was the Palestinians realized there is a total consensus against the Right of Return, and if they really want to have a state, they will have to give up on this. It’s the same about Jerusalem. The question is, do the Palestinians want their own state?

This statement says it all.

The entire power dynamic and the futility of negotiations is laid bare. The Palestinians and the Israelis have two different conceptions of peace: the Palestinians justice, the Israelis security. Security is how we, Israel, define it. Security is no Right of Return. Security is a united Jerusalem under full Israeli sovereignty. And until the Palestinians give up on their concept of justice, like they did with the Right of Return, yet still cling to uselessly with Jerusalem, they will not have a state of their own. It doesn’t matter that the actual consensus is clearly with partitioning Jerusalem. Once enough time has passed and we continue to change the facts on the ground unilaterally, the Palestinians will come around.

It is clear that this is how Israeli politicians see it. They will take what they want by force and negotiate what they don’t want as a matter of form. The question is how far the Palestinian leadership is willing to capitulate by lending their consent to this method through signing off on it at the negotiating table. Based on what was revealed in the Palestine Papers, that may be pretty far. Although, it is hard to say how much legitimacy the Abbas-led government has in striking a deal, especially one that gives up the Right of Return for millions of people, something enshrined in international law. Maybe Abbas, like Arafat before him, is unwilling to be browbeaten into signing a permanent deal that gives up Palestinian rights — which Israel has then used to create the dominant narrative of themselves as doing whatever it takes to make peace and the Palestinians as “never missing an opportunity to miss an opportunity,” and Palestinian leaders as willing to negotiate but never willing to sign a deal out of duplicitous motives.

As Lapid says even later in the interview after completely negating the significance of Jerusalem to the Palestinians and the entire Muslim world:

Jerusalem is our capital and we will not negotiate about this. Well, we will negotiate but we will never give up on this.

Negotiating is fine because talk means nothing. The important thing is to know that Israel is in control.

Related:
At annual conference, Palestinians and Israelis turn ‘return’ into reality
Looking beyond the ‘curse’ of partition