A homeland is not a piece of cultivated land, nor the object of a war for pride. Homeland is not nationalism. Love has no place where land is a tool for control. Homeland is an idea through which we mold our hopes and our most secret fears. It is an unconditional love. 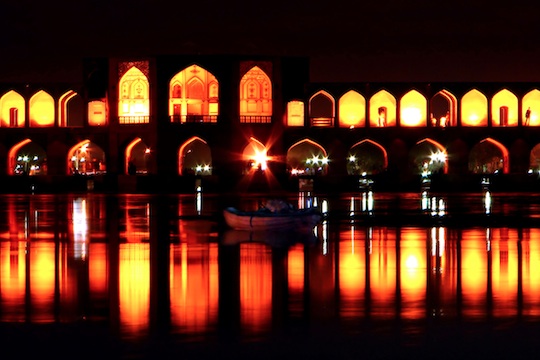 I often find myself yearning for Iran. Despite the fact that my feet have never stepped there, my mouth has never tasted its water, my lips have not sipped from its goblet. There, in the diaspora, where the dream of the promised land still burned and echoed. The longing that was part of us even before man met women, a longing for what does not exist – for a borderless purity amongst humans. The mullah (rabbi) stands at the gate of the city during every holiday with complete devotion, his face tilted toward the West – toward the sea – mourning a hill of stones and broken memories, quietly praising and calling for Zion. In his mind’s eye he sees the tribes of Israel and the Land of Judea and the Mediterranean – there he shall not pass.

My father shrinks into the blue, fur arm chair and sinks into a song of homesickness for a homeland left behind. “My Iran, my life and soul.” He glances upward, imagining the pathways of his childhood, weaving together notes and letters to form a pearl necklace of suffering. He is motionless. Like a national monument, he collects remnants of moments and gives them vitality. Soon his eyes will open and a sigh will leave his mouth.

“I am like a victim of your land / and helpless without you / every beat of my heart is the whispering of Iran,” the singer eulogizes the homeland, and my father continues, “Without you my home is full of sorrow / every moment is grief, the distance drives me mad / God knows that this world is a prison without you / life is dark and cold.” Indeed, Iran is the homeland of many expatriates, not all of them Muslims. Different religions, tribes and cultures are tied together to the forgotten homeland which has been painted black and white.

The task of wandering to a distant homeland was commanded of us, even before we became a nation, in one sentence that changed our fate: “Go from your homeland and the homeland of your father to a country that I shall reveal to you.” And here, thousands of years later, I wonder to myself, as Jews who returned to our homeland, aren’t we supposed to feel an even stronger connection to nature, to humans, to the living and the air around us? Our hearts have been filled with songs of the homeland and love for the Land of Israel, built by the fearless pioneers who sought to redeem the land of the swamps, ever since we were little. Are not the history and literature books full of songs of praise such as “Ein Li Eretz Aheret” (“I Have No Other Country”) and the famous “El Artzi” (“To My Land”), in which the Hebrew poet Rachel confesses that she did not do enough for her country.

Yoram Taharlev nicknamed it a “homeland with no shirt, a barefoot homeland.” Uzi Chitman called for “Eretz Ha’Tzabar,” (Land of the Tzabar) and even Aviv Geffen called it “Uri Ur.” But no, the promised land disappointed. Friends of mine who up until recently claimed “I love the country, not the state,” can now be found waiting in endless lines for a foreign passport, or at the very least a long-term visa. And like a beggar at the gates, divested of my memories and of the images of my forefather’s land, I am forced to bear a burden that is not my own. Creating a love for the homeland out of nothing, instead of creating new meaning for living in my country, Israel, through the eyes of my forefathers.

A letter of longing from Zion to Iran

Pain is the father of creation. It is woven into our being, into books, songs and prayers. Often I find myself incessantly switching stations on the radio, until I find an Arabic station and sink into the trills of the muezzin. Quarter tones, the deeply layered singing, carved out of a deep place of pain, remind me of the songs of my home.

“My heart wants to return to Isfahan…
I am still here, but my heart is there / all my prayers and desires are there.”

As a boy I loved the elegy for Isfahan, the birthplace of my parents, but I never wondered why. It is possible that I considered the city as holy as Jerusalem, where belief and holiness move us to a memory we have never experienced. I sit and stare into my father’s eyes. I am filled with jealousy as those eyes yearn for a homeland that was taken away, for the sounds that arise from the oblivion and fill the room. The glory of a faraway kingdom, stories of bravery about giants and ghosts who walk among humans. Stories about simple people and their simple lives. That same yearning for a homeland that prevails in my family excites me to the point that it seems as if it is inherited. Or perhaps they borrowed this trait from their Shi’ite neighbors, another persecuted minority who will one day reach salvation. Persian is a holy language to me – it empowers my mind and stimulates my creativity. Songs for Iran, which are sung by Iranian expats, those same songs I grew up on, penetrate my body and strum into my soul, despite not understanding most of the words.

MK Hanin Zoabi, with whom I do not see eye to eye, once claimed that Jews in Israel do not understand the love for a homeland. “Loving the homeland means loving and respecting its history and that of its indigenous people. One who loves his homeland does not cut down trees nor build ugly fences and does not ruin the natural view. This is not love, this is a project that says ‘we are the masters and we want to erase the other group that exists here’.” This is true. A homeland is not a piece of cultivated land, nor the object of a war for pride. Homeland is not nationalism. Love has no place where land is a tool for control. Homeland is an idea through which we mold our hopes and our most secret fears. It is an unconditional love.

My love for Zion and Jerusalem has nothing to do with blue and white and is not based in the history books of my childhood. Its origins lay in adopting the love for a homeland from my father. From Iran to Zion. From Isfahan to Jerusalem. There is an uncertainty about a father instilling forgotten love and continuity to his son. Like the poet Khalil Gibran wrote:

Your children are not your children.
They are the sons and daughters of Life’s longing for itself.
They come through you but not from you,
And though they are with you yet they belong not to you.

This is the legacy I inherited from my father.

It is ironic that the land Abraham left for the Promised Land is the same land he misses while being in the Promised Land. Zion is my homeland, and I will love it forever. But every time that I direct my desire toward Jerusalem, the holiest of holies, I will slightly divert my eyes to Iran and tilt my head to hear the echoes of the mullah praying for the Land of Israel, that which he will never see.

Avraham H. Muthada is a writer and student of communications and journalism. This post first appeared in Hebrew on Café Gibraltar.