The rhetoric of Christian Zionists consistently places loyalty to the modern state of Israel above the example and teachings of the Jesus born in Bethlehem whose birth Christmas celebrates. It’s time to stop calling such groups Christian Zionists and instead use the term Zionist Christians, to more accurately reflect their priorities. 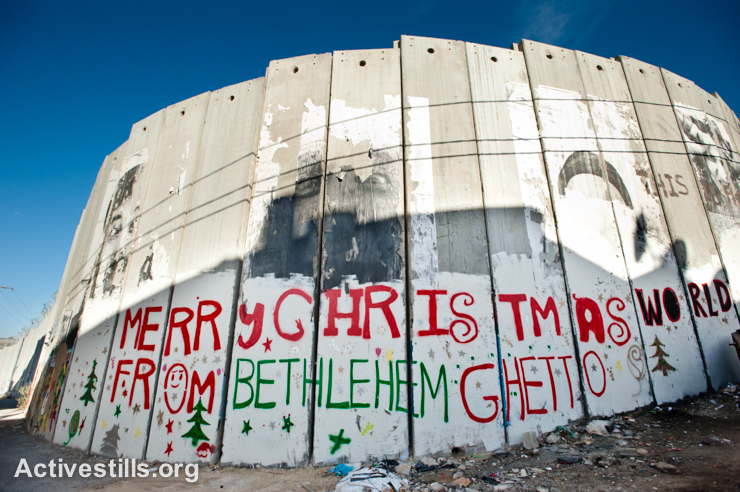 For the last two years, Christians United for Israel (CUFI), the largest Christian Zionist organization in the U.S., has sent email blasts urging their supporters to fight back against the Boycott, Divestment and Sanctions (BDS) movement by buying Christmas ornaments “Made in Israel.” Or rather, by receiving these ornaments as a reward for a tax-deductible donation. One message urges supporters to “commemorate the birth of Jesus Christ with this symbolic ornament that was made in the land where Jesus was born.”

I don’t blame CUFI for flogging BDS to fill its own coffers. That’s just standard fundraising strategy. What offends me as a Christian is that while exploiting U.S. Christians’ sentimental perceptions of the Holy Land, they ignore the current situation in Bethlehem, they ignore Palestinian Christians, and worst of all, they ignore the Jesus they claim to follow.

Jesus was born in occupied territory. At the time, it was occupied by the Romans. Today, the West Bank town of Bethlehem is virtually surrounded by the Israeli separation barrier, which if completed as planned will confiscate some 64 square kilometers of the governorate’s land as nearby Israeli settlements continue to expand in violation of international law. How dare CUFI mention “the land where Jesus was born” without recognizing the plight of the Palestinian Christians who’ve carried his tradition to the present day? 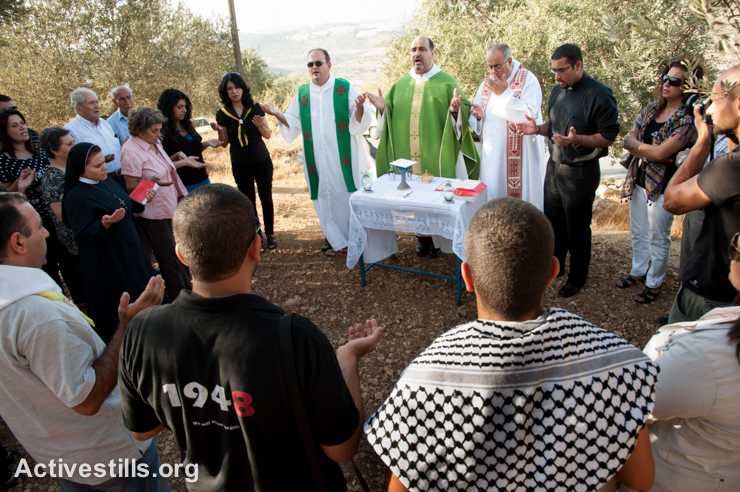 In their Christmas email, CUFI claims that BDS supporters are: “Israel haters” who are “hoping you’ll not know that the freest Arabs in the Middle East are the Arab citizens of the Jewish State of Israel.”

While denying the persistent discrimination faced by Palestinian citizens of Israel and entirely ignoring the injustices faced by those living in the occupied territories, they also ignore fellow Christians. Some 3,000 Palestinian Christians, including the heads of 13 historic Holy Land denominations signed the Kairos Palestine Document, which calls for: “boycott and disinvestment as tools of nonviolence for justice, peace and security for all.”

Unlike the straw man “haters” of CUFI’s rhetoric, Kairos Palestine’s call for BDS is rooted in values of liberating love: “These advocacy campaigns must be carried out with courage, openly and sincerely proclaiming that their object is not revenge but rather to put an end to the existing evil, liberating both the perpetrators and the victims of injustice.” 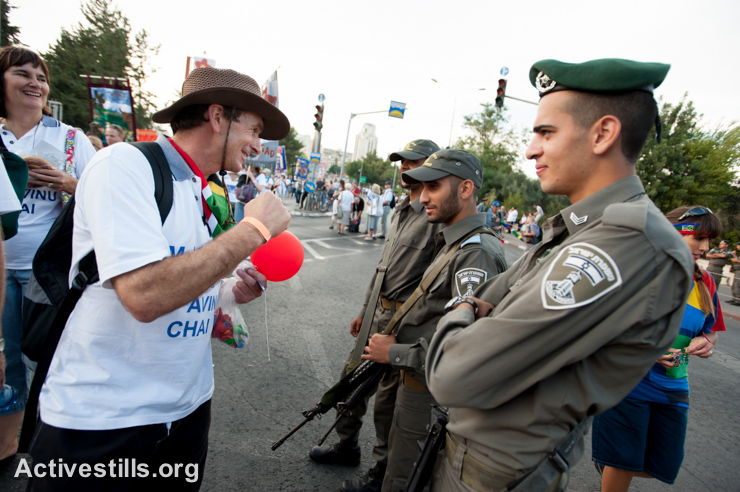 If only groups like CUFI reflected the best teachings of their faith as clearly. Instead, they have made an idol of the modern state of Israel. They may mention Jesus every now and then, but they rarely quote him. Benjamin Netanyahu gets a lot more airtime. “Netanyahu” even returns more than twice as many search results as “Jesus” when searching their web site.

I was not surprised to learn — from the extremely conservative Christian magazine Charisma of all sources — that CUFI’s executive director, David Brog, is “said to run CUFI like a political campaign.” The report goes on to say that, “[o]ne by one, the higher-profile Christian leaders who helped [John] Hagee start CUFI are dropping off as the organization becomes more focused on political lobbying.”

Unfortunately, CUFI and similar groups have convinced many Americans that “blessing Israel” means rubber-stamping every policy of its increasingly right-wing governments. This includes a message filled with military imagery to “stand with Israel” during last summer’s assault on Gaza, with talking points like, “Israel must not be condemned for doing what any responsible government would do to protect its citizens from terror.” Another message demands, “[t]ell President Obama to stop blocking weapons to Israel!” And yet another email cites 64 Israeli soldiers killed and describes a CUFI-sponsored solidarity visit by pastors to Jerusalem, Sderot and Mt. Herzl. None of these messages even mention the 2,200 Palestinians killed in Gaza, most of them civilians. 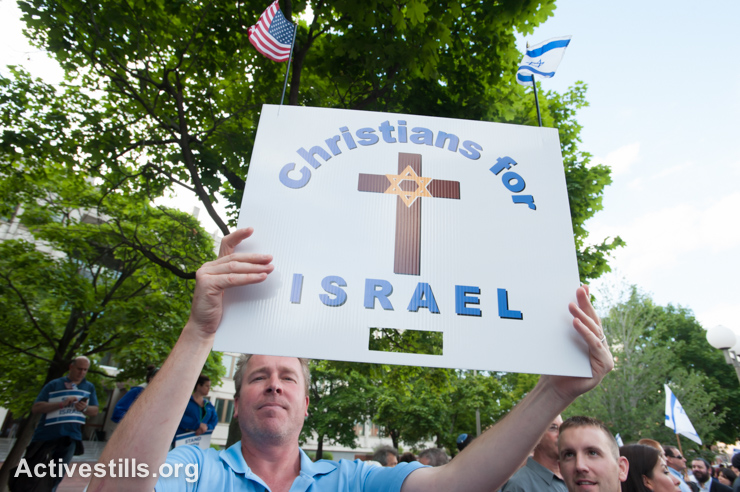 A Zionist Christian attends a “Stand with Israel” rally in Boston, August 7, 2014. The rally came in the midst of an Israeli military offensive that had thus far killed nearly 2,000 Palestinians, including at least 1,400 civilians. At the same time, three civilians in Israel and 64 soldiers had been killed by Palestinian militants. (photo: Ryan Rodrick Beiler/Activestills.org)

One need not be a Christian to recognize that Christmas celebrates the arrival of the Jesus who preached, “blessed are the peacemakers”, “love your enemies”, compassion for “the least of these,” and who taught his followers to pursue “justice and the love of God.” But as a Christian, I am compelled to question the priorities of fellow believers who have placed loyalty to the government of Israel above the life, teachings and example of Jesus.

A Palestinian pastor friend put it this way: “my biggest challenge with Christian Zionism is that it doesn’t promote peace and it ignores justice.”

Where is the Jesus of sacrificial love, peace and justice for all amid the Israeli and American flag-waving and military imagery? I therefore suggest that we stop calling such groups Christian Zionists and instead use the term Zionist Christians, to more accurately reflect their priorities.

The Kairos Document offers a sharply contrasting vision of concern for all life, but will U.S. Christians listen to their Palestinian sisters and brothers?

Through our love, we will overcome injustices and establish foundations for a new society both for us and for our opponents. Our future and their future are one. … We call on the people of Israel to be our partners in peace and not in the cycle of interminable violence.

Finally, as an alternative to the CUFI’s ornaments, I recommend supporting Palestinian Christians in the town where Jesus was born by buying an olive wood nativity like this one from the Bethlehem Bible College gift shop—complete with separation wall to raise awareness among your holiday guests.