Activists are flying to Tel Aviv in a coordinated campaign to challenge Israel with a declared intention to visit Palestine. Israeli security is on alert, and by Saturday, 60 percent of the 1,500 activists who sought to join the ‘Welcome to Palestine’ initiative were informed that their tickets were cancelled. Israel also promised to arrest and deport those who did make it to Ben Gurion Airport. +972 blogger Mya Guarnieri was embedded with some of the activists on a flight from Geneva.

Geneva-Tel Aviv — By 8:00 PM Israel time Sunday night, at least 56 people in the “Welcome to Palestine” initiative were refused entry into Israel on Sunday after stating their intention to visit Bethlehem, according to Israeli Police spokeswoman Luba Samri. 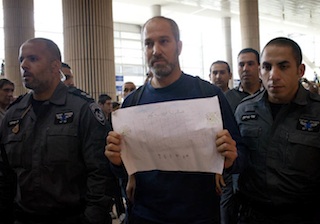 Israeli protester being detained by police, holding a drawing by a Palestinian child. (photo: Activestills)

At least 10 people were arrested at the Ben Gurion Airport – nine Israelis and one international protester. As of Sunday night, four of the Israelis had been released. The rest, according to Samri, remained under investigation.

Two of the Israelis were taken away by police in the arrivals hall Sunday afternoon, one after pulling out a sign reading, “Welcome to Palestine.” She was heckled by a right-wing man who called on her to “go back to Syria.” He was not detained.

Right-wing protesters maintained a presence in the arrivals hall for much of the day.

My easyJet flight from Geneva landed as planned on Sunday at around noon. Activists disembarked from the plane, and were offered, along with other passengers, flowers and water by Ministry of Tourism representatives as they headed to passport control. At least five activists from that flight were escorted away by Israeli security.

Organizers of the campaign confirmed that a number of activists managed to board their European flights on Sunday without problems. However, last-ditch interventions were made to prevent “Welcome to Palestine” participants from reaching Tel Aviv. Before the easyJet flight took off from Geneva, local airport employees pulled two people off of the plane, both confirmed to have been blacklisted by Israel. When asked why he is enforcing the blacklist, one easyJet representative responded, “Ask Israel why it made it.”

Lubna Amar, a sales assistant who lives in Lyon, France, said she had joined the “Welcome to Palestine” campaign because, “We have a right to [travel] to Palestine freely. [Palestinians under Israeli occupation] are like prisoners. It’s not acceptable.”

Organizers said that more than half the easyJet flight was initially comprised of activists, many of them French citizens in their 20s. According to media reports, Lufthansa, Jet2 and Air France were among other airlines that cancelled the tickets of a number of passengers, in compliance with the blacklist provided by Israel. Activists were also reportedly stopped from boarding a flight from Istanbul to Tel Aviv.

It was not immediately clear exactly how many activists managed to board their flights without incident. In Geneva, I saw one group being held for questioning at passport control. They confirmed that they were “trying to reach Palestine” and did not appear to make the flight. 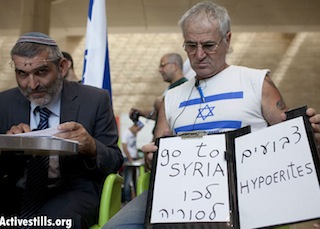 The activists have been invited by 25 Palestinian civil society organizations to spend the week in the Bethlehem area building an elementary school, planting trees, and repairing village wells that Palestinians say have been damaged by Israeli settlers. Israeli left-wing activists were at the airport on Sunday morning to greet them, as were a group of right-wing activists, MK Michael Ben Ari among them.

The goal of the campaign is to call attention to Israel’s control over all entries into the West Bank, including into areas – like Bethlehem – officially controlled by the Palestinian Authority. Many tourists and activists generally refrain from mentioning the West Bank when questioned at the airport about their planned visits, but the decision to declare Bethlehem as a destination is central to the strategy of this initiative.

My colleague Dimi Reider published yesterday the letter that the activists were to receive upon landing in Israel. It lambasts them for failing to protest what it calls the “real problems of the region” – listing the situation in Syria and Iran as examples. The letter concludes by wishing the reader a “nice flight.” In an indication of how Israel seeks to present the initiative to the world, Ofir Gendelman, a spokesperson for the Prime Minister’s Office, tweeted Sunday, “The #airflotilla2 provocation was conceived by extremist Islamic+anti-Israel organizations who object to peace&call for Israel’s destruction.”

Last year’s “Welcome to Palestine” initiative, meant to highlight Israel’s control over the Palestinian territories, saw more than 300 internationals attempt to land in Israel. Israel blacklisted most of them, including a nine-year-old child and an 83-year-old activist. Many were prevented from boarding their planes in Europe; more than a hundred were arrested upon arrival in Ben Gurion Airport.

Government sources reported to +972 that they expect a small number of additional “Welcome to Palestine” activists to arrive on Monday morning.

Noa Yachot contributed to this report.