facebook twitter email link
Another Israeli activist has been arrested and jailed in connection to the protest in front of the US ambassador’s house last Saturday night. The activist was summoned for ‘questioning’ yesterday afternoon and arrested upon arrival. He has been charged with the same crimes as the other activists who were released yesterday on no bail. Unlike the other activists, he has been given a sentence of five days’ house arrest. The state has appealed the decision and asked for a harsher punishment.  The judge honored their request and has decided to keep him in jail another night until his appeal is heard tomorrow morning. 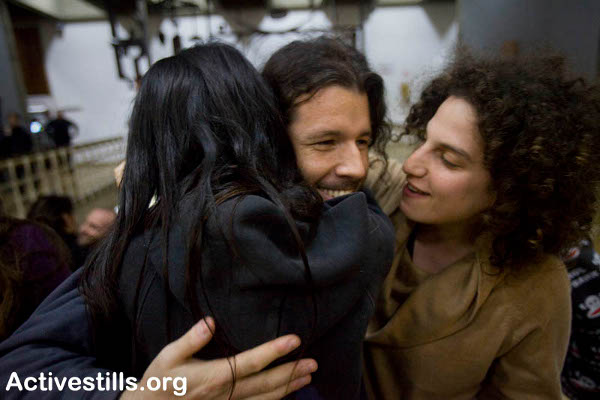 Activists embrace one anther after being released from jail on 4 January.( Photo: Oren Ziv/Activestills.org)
In another development, early this morning a special unit of the Israeli police, the Yassam, attempted to raid the house of one of the released activists. However, the police did not have a search warrant and the activists denied their entry. The police said that they would return this afternoon with a search warrant and possibly target other activists’ homes.

Matt Lee, AP: Were you able to get an answer to my question yesterday about the protest at the U.S. ambassador’s residence in Tel Aviv?

MR. CROWLEY: Yes. A small number of people came to the residence. They tossed one teargas canister. We do not see this as an attack on the ambassador’s residence. (editor’s emphasis)

Why is Israel pursuing this case when it is clearly a dead end road? The US State Department has stated on record that the protest was simply that and not any sort of attack. Additionally, the judge presiding over the case said privately that the activist’s charges would not stand up in a trial. Does the ‘Jewish Unit’ of the General Security Service (GSS) have nothing better to do with its time than intimidate and harasses a handful of Israeli activists that believe the occupation is immoral?

Perhaps the GSS could investigate settlers from the extremist settlement of Yizhar who were throwing stones near Nablus last week. It is difficult not to see these events as a part of a greater strategy aimed at crushing leftist dissent in Israel society.