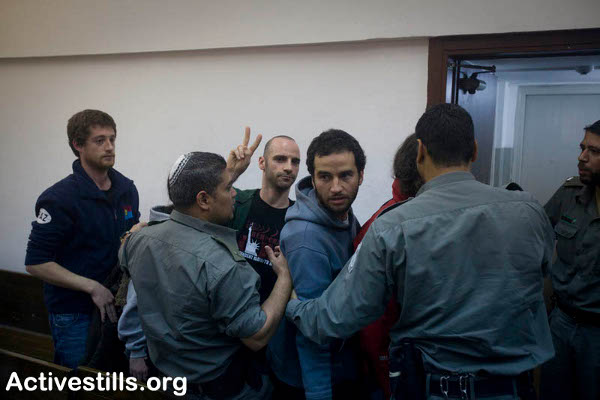 Some of the Arrested in a Tel Aviv Courthouse. Picture Credit: Oren Ziv/activestills.org

Israeli activists protesting the killing of Bil’in’s Jawaher Abu Rahmah ‘returned’ spent tear gas canisters to the residence of the American ambassador to Israel late Saturday evening. Jawaher Abu Rahmah, 36, was evacuated to the Ramallah hospital on Friday after inhaling massive amounts of tear-gas during the weekly protest in Bil’in, and died of poisoning Saturday morning. The tear gas used by the Israeli forces in Bil’in is manufactured by Combined Systems Inc.; a United States company based in Jamestown, Pennsylvania. This is the first protest where empty tear gas canisters have been returned to an ambassador’s home. 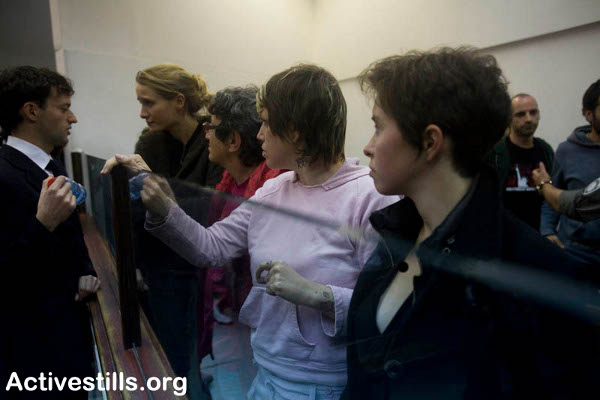 Approximately 25 five Israeli protesters gathered in front of the residence of U.S. Ambassador to Israel, James B. Cunningham, around 1am local time. The protesters ‘returned’ loads of spent tear gas canisters collected in the West Bank village of Bil’in. The demonstrators also made noise throughout the ambassador’s neighborhood, informing residents of how American military aid to Israel is being used to kill unarmed and nonviolent demonstrators in the West Bank. They chanted, “one, two, three, four stop the occupation stop the war. Five, six, seven, eight end the funding (US) end the hate.” This action is one of the first by Israeli activists demanding accountability of a foreign government. Instead of targeting the Israeli public, activists did a symbolic act aimed at the United States. This could signal the future of targeted BDS-style actions (Boycott, Divestment and Sanction) actions by Israelis who witness the destruction of US military aid in the West Bank. 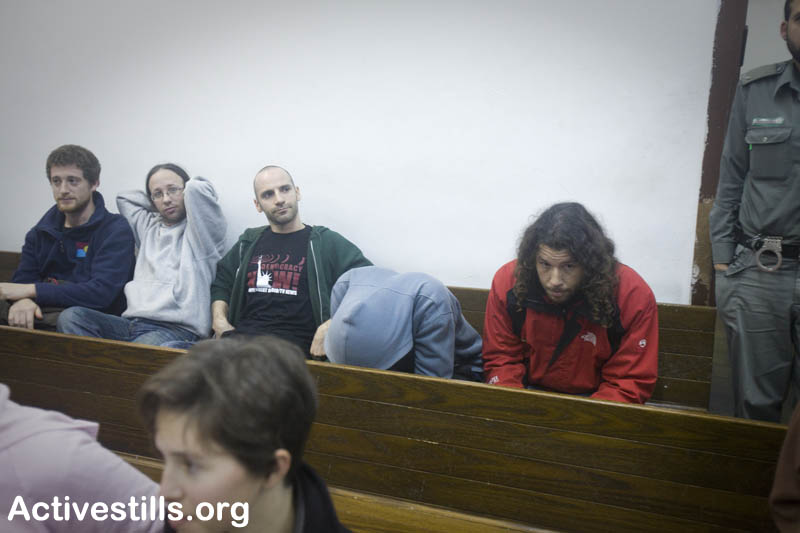 Five demonstrators were arrested in the action and are currently being held in detention. It is unclear when they will be released and on what charges. The action in front of the ambassador’s residence completed a day of protest throughout Israel and the West Bank stemming from Abu Rahmah’s death. On Saturday evening, hundreds demonstrated opposite the Defense Ministry in Tel Aviv. Protesters manged to block Kaplan street, a main artery, for over one hour. Eight people were arrested, including a former Knesset member from the left wing Meretz Party, Mossi Raz. 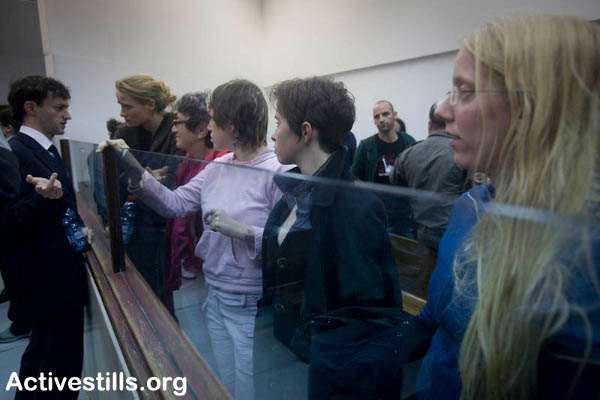 UPDATE 10:47: The arrest of the demonstrators has been extended for 48 hours (until Tuesday). They have been charged with illegal demonstration, resisting arrest (because they locked up arms in order to be arrested together) and tossing spent tear gas canisters over the fence of the US ambassador’s house. The court will convene again on Tuesday in order to see if any more charges will be filed.

UPDATE 11:40: The police now claim that some of the tear gas canisters were still ‘live’ and thus, the activists are being charged with attacking the US Ambassador’s home. Among the demonstrators arrested are those who were simply in the area and not involved in any protest. There is an appeal being filed right now.

For more coverage of the death of Jahawer Abu Rahmah: