The 36 year-old woman was evacuated to a Ramallah hospital on Friday afternoon, after losing consciousness. Doctors attached her to a respirator and treated her for exposure to toxins found in the tear gas, but the patient did not respond. She died at 9 o’clock  on Saturday morning, without regaining consciousness.

Bil’in has been the site of weekly demonstrations on Friday afternoons since 2005, when the route of Israel’s security barrier was constructed so that it divided the village proper from much of its agricultural lands. Click here to read about Abdullah Abu Rahmah, Bil’in popular resistance coordinator, who has been in Israel’s Ofer Military Prison for more than one year.

The demonstration to protest Jawaher’s death by tear gas asphyxiation was announced mid-morning on Saturday, via Facebook and Twitter. Despite the short notice, it attracted at least 200 people. The crowd was sufficiently large to block traffic across from the Ministry of Defense (Kirya) on Kaplan Street, a main traffic artery that connects to the Ayalon Highway.

Waving  mourners’ posters emblazoned with photos of Jawaher Abu Rahmah captioned in Arabic, and carrying placards with slogans in Hebrew and English, demonstrators chanted in Hebrew:  “Citizens, awake! Fascism is already here!”  “Barak! Barak! Minister of Defense! How many demonstrators have you killed today?!” ; in English: “Apartheid! Fight back!”; and in Arabic: “Min Ghaza el Bil’in, hurra hurra Falasteen!” (from Gaza to Bil’in, freedom, freedom for Palestine). 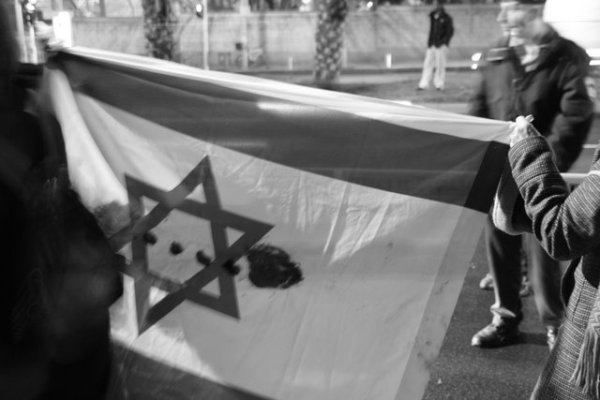 As the crowd grew and the chanting became more insistent, riot control police, who had previously stood indifferently in front of the area cordoned off for demonstrators, tried to disperse the crowd by wading in and pushing people. The crowd resisted by pushing back. Police quickly changed tactics and began to arrest demonstrators, pushing them to the ground and twisting their arms behind their backs in at least one case, as onlookers jeered and shouted, “Shame! Shame!”

Altogether, eight were arrested  – including former Meretz MK Mossi Raz.  A Hebrew-language Ynet report includes an embedded video clip that shows police arresting Raz. At one point, a voice can be heard yelling at the arresting officers, “He’s a member of Knesset, you idiots!” Raz says to the police, as they push and drag him toward the police van, “Did you see me resisting arrest? Did you?!”

After the round of arrests, the remaining demonstrators staged a spontaneous sit-in on the road, blocking traffic at the intersection in front of the ministry of defense for more than an hour as police stood by, alternately threatening arrests and trying to negotiate with the apparent leaders of the demonstration. At one point, a young woman seated on the pavement shouted at the police through a megaphone, “Return the people you arrested and we will disperse! Otherwise you will have to arrest all of us by force and there are a lot of us, so think about that carefully!” The demonstrators responded with shouts of approval and applause. 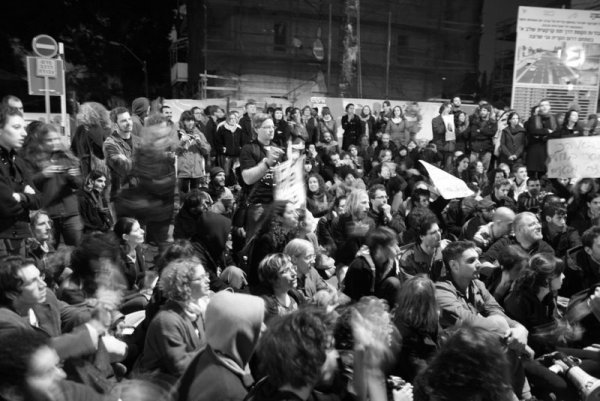 Demonstrators blocked traffic in front of the Ministry of Defense for more than one hour (photo: Lisa Goldman)

Eventually, after having brought traffic on one of Tel Aviv’s main thoroughfares to a halt for about 90 minutes, the demonstrators decided to move to the police station on north Dizengoff Street, where the arrested protesters were being held pending arraignment.

Earlier in the day, Jonathan Pollak, a well-known anti-occupation activist, and human rights attorney Michael Sfard, who represents the village of Bil’in in its struggle to have the route of the security barrier moved, were interviewed on Voice of Israel’s Reshet Bet. Pollak, who was present at the Friday demonstration, reminded the interviewer that 21 demonstrators have been killed by the Israeli army since 2005 – 10 of them minors. None of them was armed, and not even the army ever tried to claim that the demonstrators carried weapons. Pollak also noted that Abu Rahmah was not the first person to die following exposure to tear gas fired by Israeli forces. Another recent victim was Mohamed Abu Sarah, 18 months old, who died when tear gas seeped into his Silwan home while he was sleeping. There have been several other victims of tear gas asphyxiation.

Sfard added emotionally that the army’s version, which included the claim that Jawaher Abu Rahmah had been released from the hospital on Friday night and died at home, was an absolute lie. The army also claimed that tear gas in standard amounts was used to disperse stone throwers;  but according to several eyewitness accounts – including that of +972 Magazine member Noam Sheizaf, who was also present at the demonstration –  the soldiers began firing tear gas as soon as they saw the demonstrators. This was well before they reached the fence and certainly before any stones were thrown. Many other witnesses, including this writer, saw that the army blanketed the village in enormous quantities of gas, causing children as young as 8, who were standing at least 150 meters from the fence, to gag and spit up mucus.

According to the website MySay, the army uses a type of tear gas that is the most toxic and dangerous type available. The gas, known by the acronym CS, was outlawed in the UK as far back as 1964 due to concerns over its many side effects  – one of which is the potentially deadly accumulation of fluids in the lungs several hours after exposure to the gas.

For more coverage of the death of Jawaher Abu Rahmah: