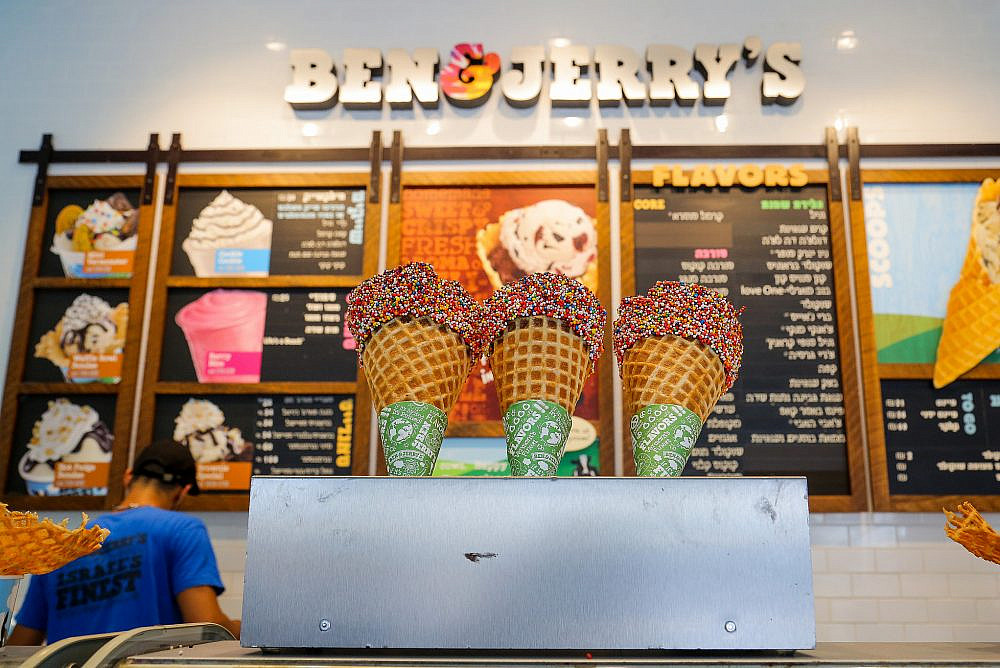 No one would have thought that two Jewish senior citizens from Vermont would become the new faces of terrorism in Israel — yet it seems that is exactly what Israeli leaders and their supporters want you to believe. Ben Cohen and Jerry Greenfield, the two owners of Ben & Jerry’s Ice Cream, are currently being branded as antisemites and even being accused of “economic terrorism” after their company, from which they have long retired, announced it would no longer be selling its products in Israeli settlements in the occupied territories, as required by international law.

The overreaction by Israeli officials is not unusual, nor is it an excess of emotion on their part. Rather, their furious response is a deliberate, proven strategy to deter any attempt at promoting corporate accountability around the occupation. In 2018, the rental company AirBnB took a similar decision to stop listing spaces located in Israeli settlements through their app. The outcry was similar to the current one against Ben & Jerry’s, with various lawsuits filed against the company claiming the move constituted discrimination. A few months later, AirBnB rescinded their policy.

It remains to be seen whether Ben & Jerry’s can withstand the pressure they are facing. Beyond the vitriol being unleashed at them, the Israeli government and its allies are attempting to use anti-BDS laws passed by over 30 U.S. state legislatures to try to force them to back off. Working in tandem with the supposedly “moderate” foreign and deputy prime minister Yair Lapid, Israel’s ambassador to the U.S. Gilad Erdan wrote to the governors of those states urging them “to act against Ben & Jerry’s decision to not sell its products in the eastern part of Jerusalem and Judea & Samaria. We will make clear to Ben & Jerry’s that its antisemitic decision will have consequences.”

This may seem like a natural gambit for Erdan — but it’s in fact a risky move. Despite their proliferation, anti-BDS laws in the United States stand on very shaky grounds. They are a clear attempt to prevent U.S. citizens and businesses from exercising their constitutional right to free speech, which for decades has been definitively defined as including the right to boycott. Some of these anti-BDS laws survived legal challenges because those who brought the cases were deemed to lack the standing to do so; with others, the court proceedings dragged on long enough for the cases to become moot and subsequently dismissed. But when the laws have been put to the full legal test, they have consistently been determined to violate the First Amendment which protects freedom of speech. 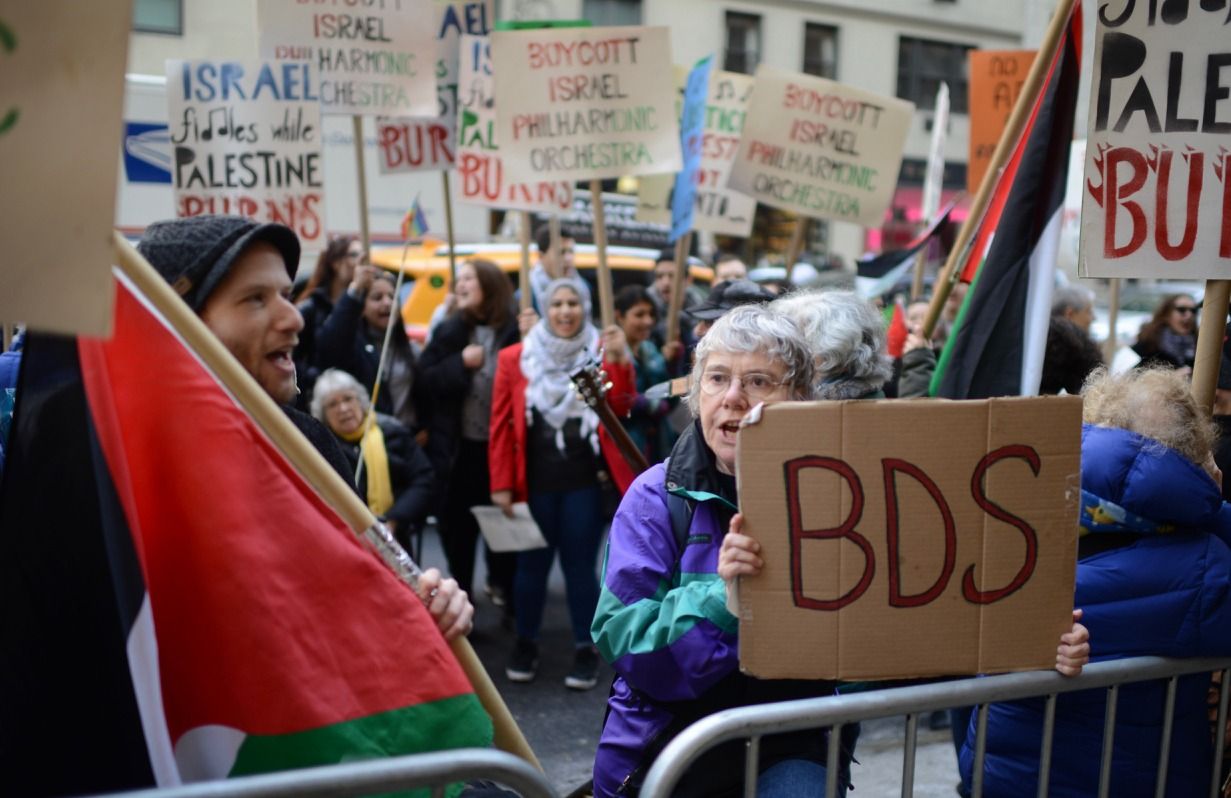 Nonetheless, a number of states have already begun looking into initiating legal challenges against Ben & Jerry’s, such as Florida, Texas, New York, New Jersey, and Illinois. Members of Congress are also pushing their states to apply these measures; Rep. Lee Zeldin of New York has been particularly vocal, saying that the company’s decision to “target hundreds of thousands of Jewish customers abroad with this discriminatory boycott is a disgrace and a direct embrace of the anti-Israel BDS movement.” Numerous other Republican members of Congress echoed similar statements, as did several Democrats. In an era where bipartisanship in Washington is almost a fantasy, blindly opposing any step that helps Palestinians attain their rights is apparently one of the few things that still gets support from both parties.

‘We are not surrendering’

This pressure against Ben & Jerry’s may very well lead to severe action. But this time, it would be against a company that has the resources, willpower, and popularity to fight back, rather than an individual or a small business that could be coerced into settling the case or backing off entirely. BDS supporters must hope that, given the amount of time the ice cream makers have taken to make this decision, they were aware of what they were getting into. So far that has proven to be the case.

Still, it’s not just the legal battles that could make life difficult for the ice cream makers: Ben & Jerry’s may find it hard to keep its promise to discontinue sales in the settlements but continue them in Israel. Avi Zinger, the CEO of Ben & Jerry’s current distributor in Israel, publicly refused to accommodate the demand to stop selling in the settlements, prompting the company to announce that they would sever their relationship with him when their contract expires at the end of 2022.

Zinger, who has been with Ben & Jerry’s Israel for 34 years, called on Israelis to buy as much of the ice cream as they could between now and the end of his distribution contract. “They did this because we would not agree to stop selling ice cream in all parts of Israel,” Zinger said. “We are not surrendering and it’s important that you support us. I ask you all to stand by us, help us fight because our fight is everyone’s fight.” 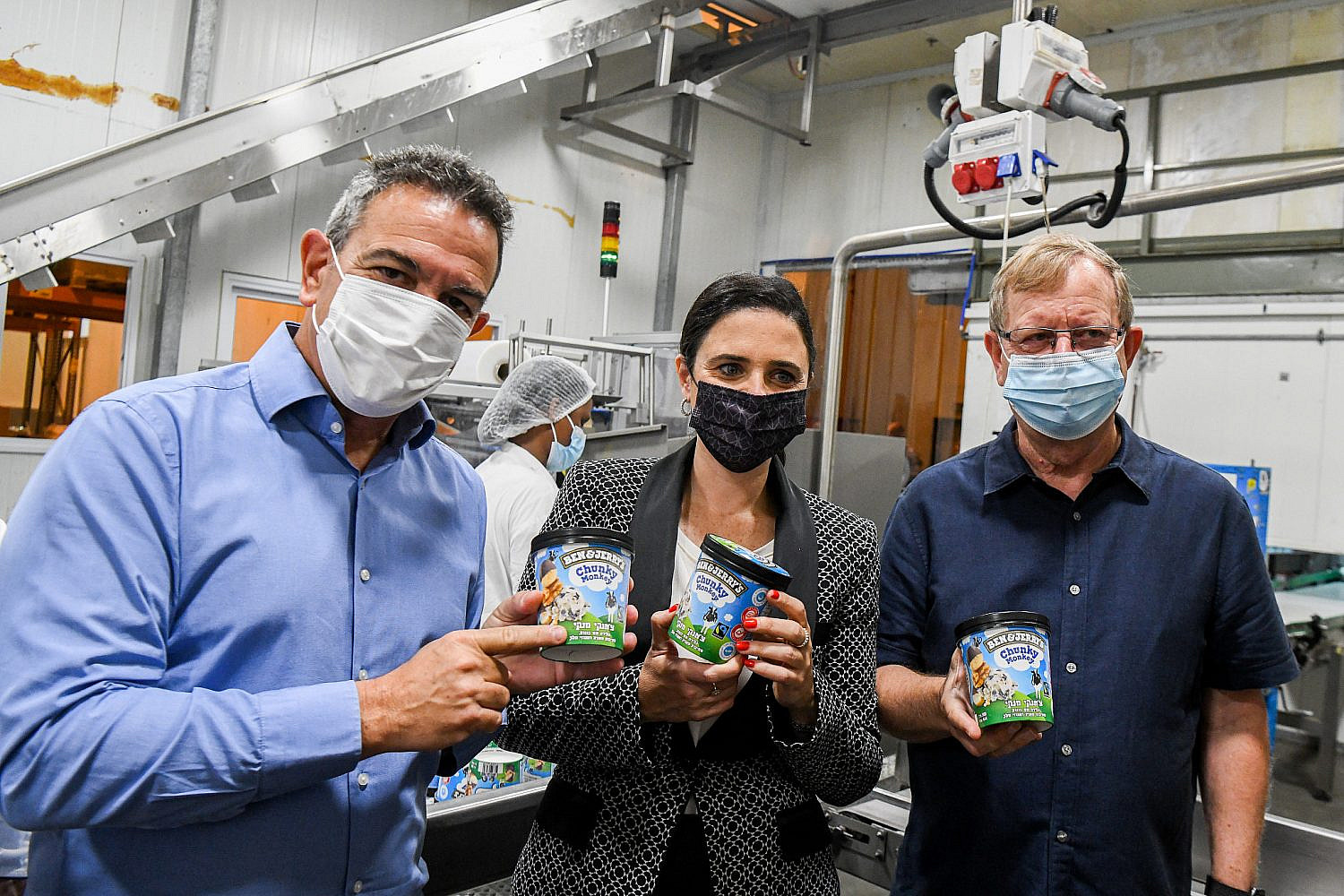 Many distributors of any product in Israel are likely to feel the same as Zinger, whether out of nationalist conviction or simply prudence in business. If that sentiment is indeed widespread, and Israeli distributors refuse to adhere to the company’s guidelines, Ben & Jerry’s could be faced with a decision when December 2022 rolls around: either return to selling in the settlements, or abandon the Israeli market altogether. Right now, some Israelis are starting to make that decision easier by boycotting Ben & Jerry’s themselves and expressing their hostility to the brand.

There is also the pressure being put on the Unilever corporation, which officially owns Ben & Jerry’s. The terms of Unilever’s purchase of Ben & Jerry’s two decades ago allow the ice cream makers, who have long branded themselves as supporters of progressive causes, to take stands for social justice on their own even if Unilever objects. The parent corporation has affirmed that it will not follow Ben & Jerry’s pullout from the settlements, but also re-affirmed the latter’s right to make that decision. Still, Unilever, which distributes many well-known products throughout Israel and the West Bank, is sensitive to the fact that many of the people attacking Ben & Jerry’s are hurling the same vitriol at the parent company as well. It may be pressed to use whatever levers it has to make the ice cream makers reverse their decision.

Growing base of support

Ben & Jerry’s ability to resist that kind of pressure will depend to a large extent on the degree of public backing for their decision. There has already been an outpouring of support for Ben & Jerry’s from Palestinian rights activists and the BDS movement, despite the fact that many would, understandably, prefer that the ice cream makers pull out of Israel altogether. Wisely, the BDS movement’s leadership has reaffirmed that principle but have not allowed it to dampen their endorsement of this step.

The calls for action to finally end Israel’s apartheid policies are also increasing across sectors of American society, offering Ben & Jerry’s a growing base of support for its move. A poll conducted last year further showed that only 15 percent of Democratic voters oppose BDS. Moreover, a recent poll showed that even among American Jews, the view of Israel as a racist apartheid state, and even as one that is committing “genocide,” is widening, while a majority of them want the United States to stop supporting Israeli crimes against the Palestinians. It won’t be easy to weather the storm that may be coming, but that support will be crucial to encourage Ben & Jerry’s to stick to their principles. 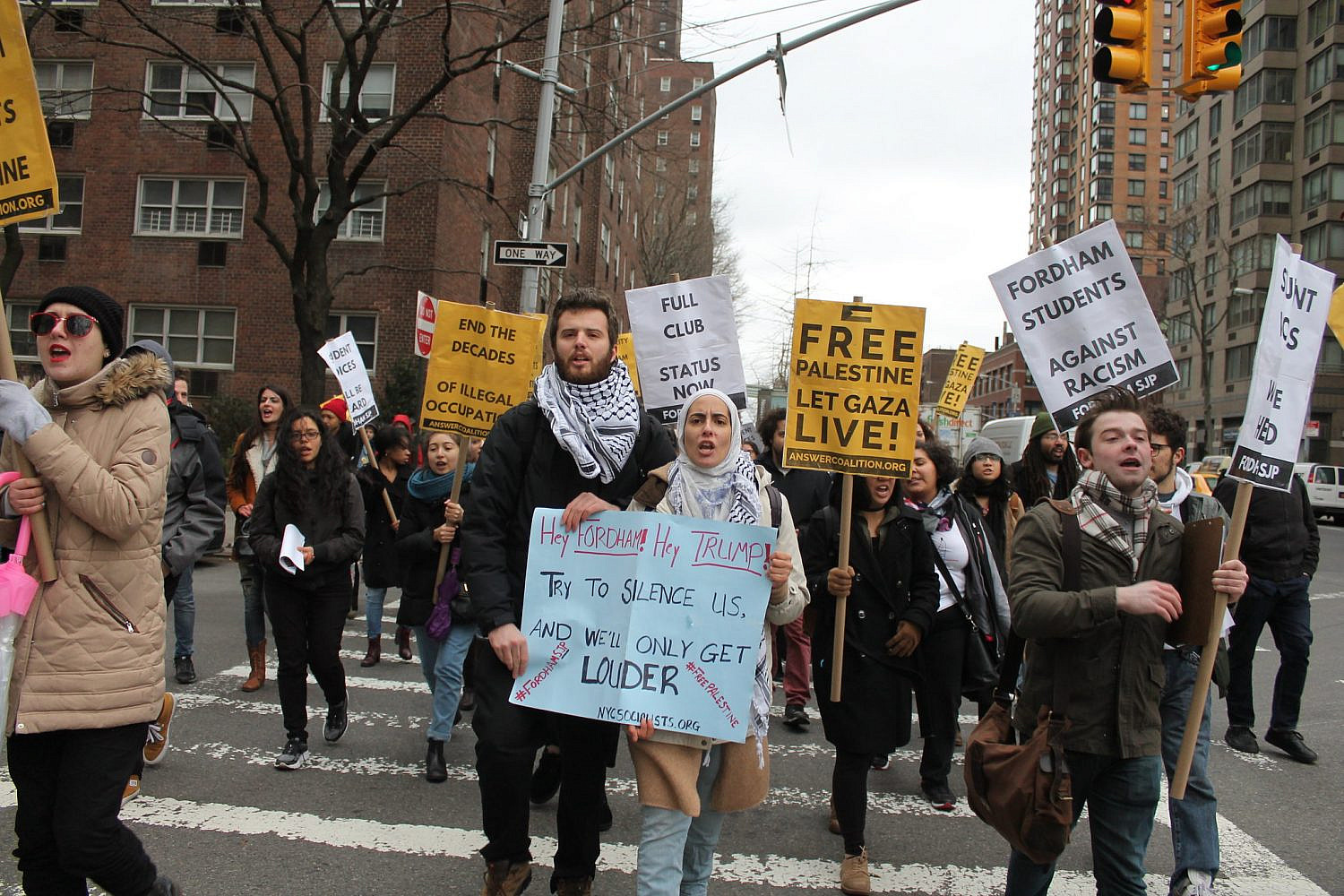 Members and supporters of Fordham Students for Justice in Palestine protest the university administration’s refusal to register SJP as a student organization, in New York. Jan. 23, 2017. (Joe Catron/Flickr)

Moreover, if Ben & Jerry’s is willing to see this fight through in U.S. courts, it could turn into a definitive victory for the BDS movement. It would be a high-profile legal case drawing a great deal of attention to the fact that state governments, and possibly the federal government as well, are trying to stifle their citizens’ free speech in deference to a foreign government. When Congress, in early 2019, was considering federal anti-BDS laws, its supporters eventually backed off, not wanting to create such an image over legislation that, even with a right-wing Supreme Court and a Republican Senate majority, faced an uphill battle.

It is therefore very telling that, while many in Congress have openly challenged Ben & Jerry’s, the White House itself has so far been silent on the matter. This may not be surprising, but it is very meaningful. The Joe Biden administration has repeatedly insisted that it not only supports a two-state solution, but will not even consider any alternatives. But that stubborn stance is detached from reality, as decades of settlement expansion and their integration into Israel’s national infrastructure has long mooted that solution. If there is no differentiation between Israel and the West Bank, there can be no Palestinian state.

Biden’s silence over Israel’s ice cream war — and indeed, his general inaction around Israel-Palestine — therefore exposes the two-state mantra for what it really is: a deflection of the harms caused by the United States’ unwavering support for Israel’s apartheid regime, and a delaying tactic that gives Israel more time to expand its settlements and normalize de facto annexation. If Biden seriously wants to cling to the ephemeral hope of a two-state solution, he would support Ben & Jerry’s decision with everything he’s got.