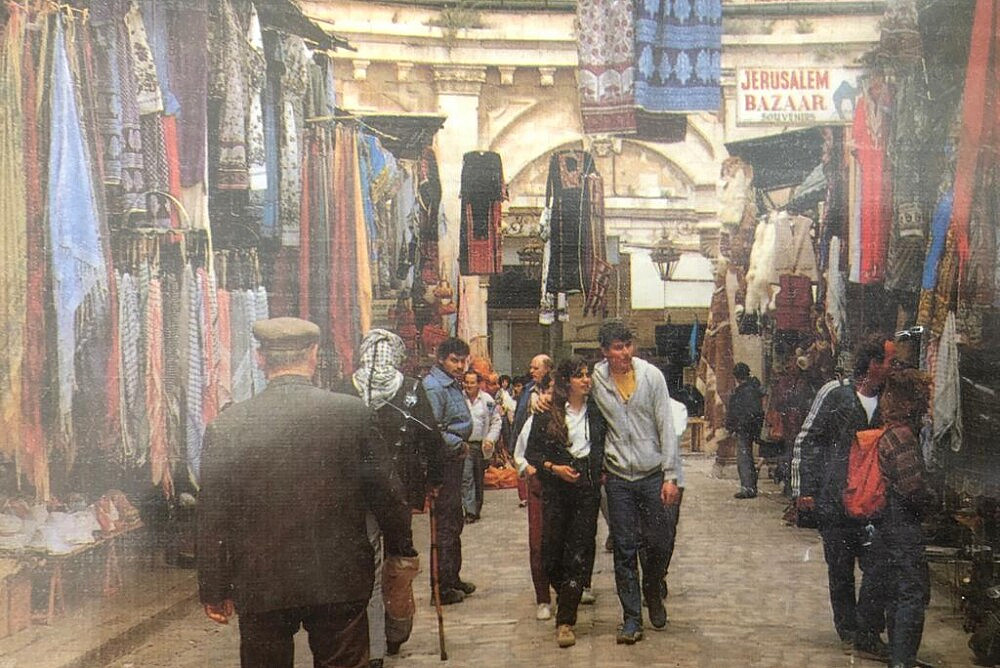 Hadar Cohen's parents in the Old City of Jerusalem. (Courtesy of Hadar Cohen)

Whenever I find myself at a leftist protest against the occupation, there is always someone holding a sign that says “Jews and Arabs refuse to be enemies.” This phrase has become, in some ways, the bedrock of leftist ideology promoting coexistence in Israel/Palestine. But when I encounter this phrase, I immediately feel disoriented. Which side am I on? If I am on the “Jewish” side, do I lose the Arab identity within me? Can I identify as an Arab, even as I enjoy privileges as a Jewish citizen of Israel? Who decided to position a race against a religion?

Colonization works with our minds to distort our understanding of identity and perpetuate its own agenda. Because of this, my identity has been a great source of internal confusion that has taken me years to unpack and untangle. Recently, I began to understand how this internal self-dialogue represents a political dilemma born through the colonization of Palestine.

I identify as an Arab Jew. My family has lived in Jerusalem for over 10 generations, and my other ancestral cities include Aleppo in Syria, Baghdad in Iraq, and Shiraz in Iran, along with a small village in Kurdistan. I grew up with primarily Syrian-Palestinian traditions and cultures. My grandmother was a feminist painter and cultural lover of film and literature. My grandfather was a prayer leader skilled in the art of maqamat, a unique Arab melodic framework, who recited prayers in the Syrian-Jerusalemite tradition. My family prayed in Hebrew and Arabic, with a thick accent rolling off our tongues as we pronounced Jewish blessings. I grew up with Mohamed Abdel Wahab and Shabbat piyyutim, Jewish liturgical poems, sung together. Until my parents’ generation, Arabic was the predominant language in my family.

In our traditional Jewish home, observing our Syrian-Palestinian heritage and culture came with ease. Jewishness and Arabness fit together cohesively — there was no contradiction. But outside our home, my faith and culture clashed. The State of Israel conditioned me to see the intersection of “Jewish” and “Arab” as non-existent or impossible, even though Arab Jews have lived at this intersection for years. I learned that in order to belong to Israeli society and participate in the Zionist project, I had to reject parts of myself — the Arab parts. Zionism teaches that “Arabs” are the enemies of the Jews, and, in doing so, it completely fragmented my identity. 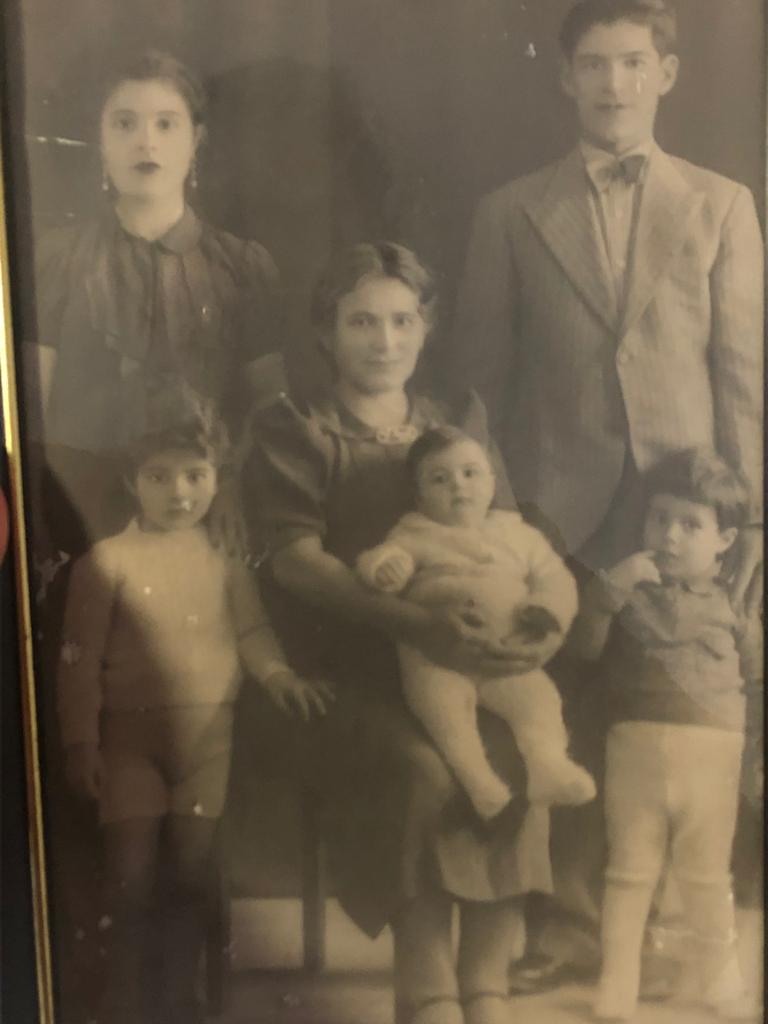 Hadar Cohen’s great-grandmother with her children in Baghdad. (Courtesy of Hadar Cohen)

These subtle changes gradually built up to subvert my original identity. It created a dissonance between my internal lived reality, and the external projected narrative of the colonial project. I find myself constantly having to choose between my Jewishness and my Arabness. Am I part of the larger Jewish community, given that I follow this faith and its customs? Or do I belong to an Arab community, where the cultural traditions and lifestyles are more resonant?

Zionism created a racial caste system, positioning Jews of European descent, known as Ashkenazim, above everyone else. Jewish communities who were Arab or resembled Arabness were categorized as Mizrahim, Oriental Jews, and treated as inferior. Not only were we ripped out of our ancestral homes of thousands of years, but upon arrival to the newly-founded Israel, Mizrahi immigrants experienced harsh racism and were placed in ma’abarot, or transit camps.

There are countless examples of the State of Israel’s ongoing racism against Mizrahim. In the 1950s Israeli authorities kidnapped thousands of Mizrahi babies, and illegally put them up for adoption with childless Ashkenazi families. The parents were told their children had died. Around that same time, a senior Israeli doctor conducted experimental radiation on thousands of Arab Jewish children for ringworm, a non-lethal skin infection, and the treatment was later discovered to cause cancer and other illnesses.

The view of “Jewish liberation” under Zionism clearly did not include all Jews, nor did it treat all Jews as equal. European Zionism was rooted in an imperialist, colonial attitude that sought to create a European country in Palestine. This not only meant a war against the indigenous Palestinian communities on the land, but also a cultural war against the identities and traditions of Arab Jews. Arabness itself became the enemy of the state, and anything that resembled Arabness needed to be demeaned, disguised, or destroyed. 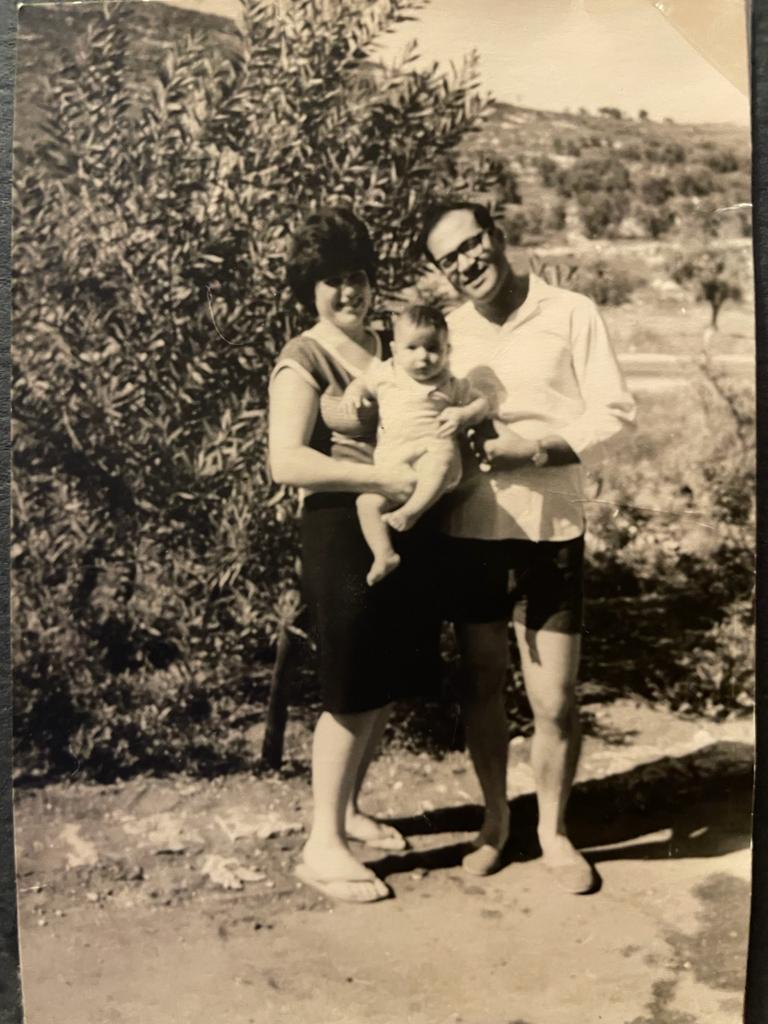 Hadar Cohen’s grandparents with her father in Jerusalem. (Courtesy of Hadar Cohen)

It is a complicated identity to hold because, on the one hand, I enjoy Jewish privileges from the state; on the other hand, I need to hate the Arab part of me to fully become part of Israeli society. There is no space for Arabness in Zionism. I need to repress, erase, and hide my Arab lifestyle and assimilate into European notions of Jewishness. Under such a racial caste system, you can never belong, no matter how much you assimilate.

A few weeks ago, I decided to share my family story on Instagram. I posted family photos and anecdotes of my ancestral lineage — but also the ways I had struggled with my identity. The original post has since grown into its own international, intersectional community. Thousands of followers of different identities and races have been sharing their stories and their struggles with their identities. It has become a space for solidarity and moving together toward healing. I was especially moved by the stories of Muslims from Arab countries who shared the loss and grief that followed when Jewish communities left their homelands.

The Semitic etymology of the word Arab is “mixed,” as for most of history, the Arab region was a place where people from different continents came to live together. This is partly why Arab culture is centered on hospitality and the welcoming of strangers. We were a place of open arms, accepting travelers and refugees with love and care. Yet with European imperialist powers building borders and walls to separate lands and communities, we have lost our way.

I choose to identify as an Arab Jew because it breaks down the walls around identity that Zionism has created. It shatters the colonial framework and creates a possibility for a different narrative. To me, this is essential in the evolution of the discourse.

Hadar Cohen is a Mizrahi feminist multi-media artist, healer and educator. She is the founder of Feminism All Night, a project that designs communal immersive learning experiences about feminism and spirituality. Hadar is a Jewish mystic who works to build decolonial frameworks for worshiping God. She teaches Jewish scripture and embodied practices through various platforms. Her artistic mediums include performance, movement, writing, weaving, sound and ritual. Check out her work at hadarcohen.me and @hadarcohen32.